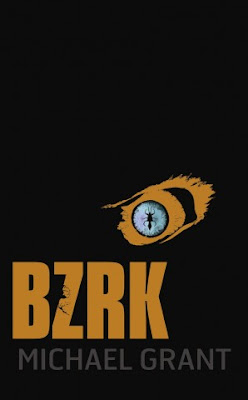 Set in the near future, BZRK is the story of a war for control of the human mind.  Charles and Benjamin Armstrong, conjoined twins and owners of the Armstrong Fancy Gifts Corporation, have a goal:  to turn the world into their vision of utopia.  No wars, no conflict, no hunger.  And no free will.  Opposing them is a guerrilla group of teens, code name BZRK, who are fighting to protect the right to be messed up, to be human.  This is no ordinary war, though.  Weapons are deployed on the nano-level. The battleground is the human brain.  And there are no stalemates here:  It’s victory . . . or madness.

BZRK unfolds with hurricane force around core themes of conspiracy and mystery, insanity and changing realities, engagement and empowerment, and the larger impact of personal choice. Which side would you choose?  How far would you go to win?

In England, Noah Cotton visits his older brother, an ex-soldier, in a mental facility where he rages about ‘nanos’ and berserk.

Sadie McLure is at a football game while her brother and father fly in a private jet overhead, off to a meeting about their company, McLure Industries.

Bug Man is at the controls, about to change the very course of history.

And down in the meat, everything is coming together for disaster. . .

‘BZRK’ is the first book in a new and frightening YA series from Michael Grant.

Nothing is as it seems in Michael Grant’s creepy-fantastic ‘BZRK’ – that’s true from the story, right down to my original pre-read misconceptions (of which, I shame-facedly admit, I had many). To begin with, the book is pronounced ‘Berserk’ (not BZ-RK as I first called it), and while the cover is rather dark and masculine, hinting at the sinister within, I actually came away from ‘BZRK’ thinking it was one of those rare YA books that will appeal equally to both female and male readers. But what really impressed me about Michael Grant’s first book in a new series is how downright clever it is. It’s something of an espionage/action-thriller/pre-Dystopian gem with teen heroes, set on an epic world-stage and will also appeal to adult readers. But I’m getting ahead of myself – let me delve into the meat of this story, if you will.

We open with threads of characters – beginning with Noah Cotton visiting his older brother in a mental asylum. Alex was once Noah’s idol – a fit military man, apart of an elite unit, he must have seemed like the veritable GI Joe to his young brother whose talents lay more in shoot ’em up video games than the real thing. But we quickly see that something has gone wrong – between Noah’s old idolization of his brother to now, when we see Alex has lost his mind and is confined to an asylum. Now he rages at the world, repeating the word ‘berserk, BERSERK! … BZRK’ over and over in a looping madness.

Shift to Sadie McLure – on a date at a football game with a boy she was intrigued by, but who is quickly boring her. While Sadie tries to keep a smile on her face in the stands, her brother and father (her last remaining family after the prolonged, suffering death of her mother to illness) fly overhead in a private jet – on their way to an important conference for McLure Industires. For a little while, as we’re introduced to the intriguing brother Stone McLure, readers may be mistaken for thinking we’re meeting the star of Grant’s series. Seventeen-year-old Stone is described as not exactly model handsome, but with a certain something that makes him not for girls, but for women. He is intriguing in everything, from his interactions with his proud father, Grey (who owns a mug with ‘FAIRLY DECENT DAD’ printed on it), to his very description: “He had a brow that seemed designed by God to mark him as honest…” but, alas, Stone is not for readers. Because as soon as we’re introduced to him, begin to settle down with his character, Grant pulls the rug out from under us in a fiery plane disaster that leaves Sadie an orphan – well and truly alone in the world.

After Noah’s unsettling visit with his insane brother, he gets a visitor – a man who only gives the name Nijinsky. He is eager to meet Alex Cotton’s brother, and has a proposition for Noah – if he’s interested. Meanwhile, Sadie is being given a similar spiel – after the fiery loss of her brother and father, she needs something to fight and fight for.

Both Sadie and Noah agree to a training program – thus pushing them onto ‘the battlefield’ with BZRK. By agreeing to enter into the battle that took Noah’s brother, and Sadie’s family away, they are leaving their old lives behind – no longer are they Sadie and Noah – they are now Keats and Plath.

Now we meet the big players of little warfare controlling the world. There’s Vincent (real name: Michael Ford) and Bug Man (Anthony Elder). Men behind the controls of nanobot and biot technology. Tiny nanorobotics - machines or robots whose components are at or close to the scale of a nanometer – are controlled by these men for two separate companies. There is BZRK – a secret organization divided into numerous cells – headed by Lear, who nobody has ever met but who masterminds BZRK with the sole purpose of bringing down Charles and Benjamin Armstrong, of Armstrong Fancy Gifts Corporation (I particularly like this – for all those who think Hallmark is secretly ruling the world). The Armstrong’s are conjoined twins and the other major players of nanorobotics. Between Armstrong Fancy Gifts Corporation and BZRK, a small battle is being waged – in eyelashes, under the skin and in the hair of the world’s most influential people. And now Keats and Plath (formerly Sadie and Noah) are entering into the battle.

The genius of Grant’s ‘BZRK’ series lies in the nanorobotics. I admit, for a little while, I was reading ‘BZRK’ thinking what a wonderful imagination Michael Grant had. And then I got a sinking feeling in my gut. I searched Wikipedia (a scary thought in itself – since in the novel, Wikipedia is used to pass secret coded messages) and found that nanorobotics are entirely real. There really are such things as nanobots and biots, and they could very well be being used by the military. And as Michael Grant’s ‘BZRK’ progresses – as readers follow Plath and Keats on their training program, learning how to control small insect-like robots with their mind’s eye – you realize what a scary proposition that is.

The fright of nanorobotics is often perfectly articulated by a character called Karl Burnofsky, who works for the Armstrong’s and is the mastermind behind many of their creations. He was once as good a controller as Bug Man, but in recent years he has turned to drink to squelch the uneasiness of what he has unleashed on the world;

You want to see God the Creator, the supreme artist? Gaze into the nano. You’ll see your God, and he will scare the shit out of you.
God isn’t in the big things measured in miles, he’s down there. Down there in a flea’s antennae like a hairy tree trunk twitching for blood, and a macrophage slithering along like a shell-less snail come to eat you up, and the cells you see splitting beneath your feet, and landscapes of seething bacteria, and yeah, right there, you want to see God up close and personal?


Much of the action of this novel takes place in ‘the nano’ – the places where these small nanobots and biots travel – often along the clothing/skin of people, hanging on their eyelash or wading through the forest of follicle hair. Grant’s descriptions are magnified and spectacular;

“It’s like crossing a desert drawn by Dr. Seuss or Salvador Dalí,” Wilkes interrupted. “Wrinkles and crevices and hairs the size of trees.”


What I loved most about ‘BZRK’ is perhaps that it is a book of many genres. By the end of this first instalment, I was thinking that Michael Grant’s new series is best described as a pre-Dystopian one. You can imagine what the world will eventually look like if the nano-warfare played out in ‘BZRK’ continues – if regimes and countries are toppled by the goings on of biots in the nano, controlled by power-hungry corporations and unseen men.

But this is also very much a series about Noah and Sadie – all that they have lost, and what they are wading into by joining BZRK. Yes, there are hints of a budding romance on the battlefield, but it’s also their respective histories of family tragedy and grief that make these two such compelling characters.

And as much as Noah and Sadie are wonderful protagonists – I’m also a fan of the villains. Conjoined twins, the Armstrong’s, are like something out of a David Lynch movie. And Anthony (‘Bug Man’) is the scariest type of sociopath because there’s so much truth in his origin – recruited by the Armstrong Corporation for his mad gaming skills, he’s now a teenager with the world, literally, at his fingertips.

Michael Grant’s ‘BZRK’ is an ALA Popular Paperback for Young Adults, but most importantly it was shortlisted for the Centre for Youth Literature Inky Awards. Here is a creepy-fantastic novel that takes a look at the current world warfare raging in the nano – based around nanorobotics and being perfected by young people with gaming dexterity. This is a cross-genre gem that will creep out the young and old, and is a must-read for anyone who enjoys a good spine-tingle with heavy doses of uneasy reality.