‘Kissing Tennessee: and Other Stories from the Stardust Dance’ by Kathi Appelt 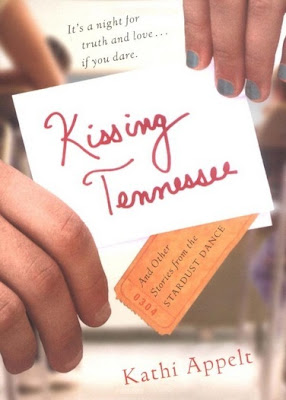 Mason and Carrie Marie can't get up the courage to ask each other to dance. Russ's girlfriend has died, and now he's just trying to live without her. Peggy Lee has grown up with Tennessee--how can she ever think of him as more than a friend?

In these moving tales and others, Kathi Appelt captures the sometimes amusing, sometimes touching missteps of some unforgettable students, who come together one last time for the most memorable night of their young lives.

It’s Friday May 31st. Between 8pm and 11pm the Dogwood Junior High cafeteria will be transformed with cardboard stars and sparkling moons hanging from wire, and the Rot Whilers belt out tunes for the eighth graders. This is the Stardust Dance – a night when boys can be daring, one lucky girl will be crowned Stardust Queen and magic might just happen. . .

First published in 2000, ‘Kissing Tennessee: and Other Stories from the Stardust Dance’ is a collection of young adult short stories by Kathi Appelt.

Sometimes I judge a book by its cover and decide to read based purely on the pretty. Very occasionally am I persuaded to a book because of the title alone – but that’s what happened with Appelt’s short story collection. I just love, love, loved that whimsically intriguing title: ‘Kissing Tennessee: and Other Stories from the Stardust Dance’ – it’s lush and lovely and gave me visions of soft blue lights, sweaty palms, best pinching shoes and hands-on-shoulders dancing, *sigh*. Sadly, I think I built the title up too much in my mind and came to this book with too high expectations because while it’s by no means bad, ‘Kissing Tennessee’ didn’t leave me with that butterflies-in-stomach, heart-in-mouth feeling I was desperately hoping for.

Some of the vignettes in Appelt’s book really worked for me and I loved them. But the stories I liked best were actually the violent/sad ones . . . which just so happened to be the stories that had the strongest connection to the Stardust Dance theme, and were (in my opinion) the hardest-hitting and best written. Take, for instance, ‘Just a Kiss, Annie P.’ in which a boy laments the death of his childhood crush, whose memory comes back to haunt him while he’s dancing with another girl. In ‘The Right Word’, Becca Scott sits in a toilet stall at Dogwood Junior High while the Stardust Dance carries on without her. As she starts crying and heaving, she reads a year’s worth of graffiti scribbled on the bathroom walls, and through a few choice words starts piecing her story together – telling how her boyfriend led her away from the dance, and into the woods. . .

Becca was there, in the dark woods. This very night. There, instead of at the Stardust Dance. She slipped out the bathroom window and let herself be led into the dark, dark woods, far away from the Dogwood Junior High cafeteria, with its dancers and drummer.


It’s hard to read those two really quite hard-hitting and beautifully written stories, and then switch back to vignettes in which the high-achiever and the slacker desperately want to be each other’s last dance.

Don’t get me wrong; some of those more relaxed and sweet short stories were okay, and offered some nice moments you’d expect from an eighth grade dance;

Flash! She opened her eyes just in time to see Sky Williams take their picture.
And that’s when the floating had started. The cafeteria floor just fell away beneath her feet. And even though Tennessee is holding her hand, she’s still way up off the ground, like one of those helium balloons, floating up there with the clouds and the comets and the birds.


But then there were some short stories I felt were trying too hard for a flimsy connection to the Stardust Dance theme. Like ‘Rachel’s Sister’ a story about two girls abused by their bible-thumping father. I think Appelt could have made this story fit better into the school-dance theme, but instead most of the action in this short happened in the past and at the girl’s home (as opposed to being about their dad, maybe, embarrassing them at the dance by dragging them home?).

I was impressed that Appelt covered a variety of teen topics and ‘issues’ with these short stories, without ever making it feel like she was ticking boxes. For instance, the story ‘Starbears’, about a young boy trying to grapple with his strong feelings for his best friend, was subtle and all the more powerful for being so understated;

Then suddenly the message was clear, blazing in midair, like a comet.


The whole book comes to about 115-pages, and I think I wanted a little bit more. I would have liked to spend time in more stories than others, or just had more stories altogether (for such a whimsical title, I do think a surrealist story would have been a nice one to add to the mix? Or even a ghost story – just something out of left-field).  I wasn’t blown away by this collection like I wanted to be, but I would recommend this to young readers because Appelt manages to cover some quite weighty topics in short, and bittersweet vignettes. 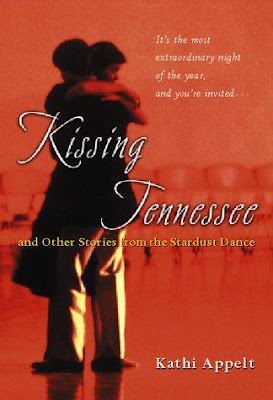