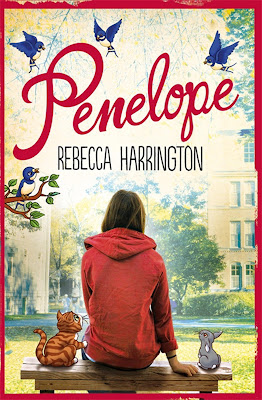 When Penelope O'Shaughnessy arrives on the Harvard campus she is amazed: she has never seen such a vast and majestic Au Bon Pain. She has also never met anyone like her fellow freshmen. Everyone is overwhelmed and overworked, striving to get into the right social clubs and frantically pulling all-nighters at the library - and classes haven't even begun.

Penelope's roommates aren't exactly the soul mates she had hoped for (Emma is a social climber intent on punching The Pudding, while Lan is a misanthrope who paints her room black). Meanwhile, her 'Images of Shakespeare' class seems mostly to involve angry discussions over whether or not the Bard was overweight; the dorm room 'pre-game' sessions never seem to lead to a real game; and the aristocratic upperclassman she has admired from afar never seems to be eating in the freshman dining hall, where she might woo him alongside the make-your-own waffle bar. When Penelope finds herself roped into a production of Camus' Caligula, she begins to worry that her entire college experience is beginning to resemble an absurdist play.

Penelope O'Shaughnessy is a quirk of a girl; she still harbours her childhood crush on Hercule Poirot, prefers playing Tetris on her phone to social encounters, feels a spiritual kinship with Whitney Houston and knows Morse code by heart. It’s no wonder her mother is concerned that Penelope is now a freshman at Harvard; where she’ll have to share a dorm with other girls, make new friends and generally ‘interact’. . . so she gives Penelope the advice to be herself (but not too much).

Now Penelope is at Harvard – the beginning of the rest of her life. Except she’s been roomed in Pennypacker; a notorious ‘outcast’ dorm above a radio station with a girl called Lan who continually paints her room and a social butterfly with a barking laugh called Emma.

Across the hall are a collection of boys who have ‘pre-games’ every night and drink whisky from morning till noon. One of the boys is Ted, of the curling Roman bangs, who latches onto Penelope early on, much to her curious surprise.

Penelope expected Harvard to look like it did in the catalogues – with Abercrombie models playing rugby on the quad, where men dress down in bowties and boat hats to stroll around leisurely with their sweaters tied around their shoulders and girls participate in random games of croquet. Just about the only person who fits this description is a mysterious and handsome student called Gustav, who wears white linen suits and talks about his family’s arboretum (they have wheelbarrows decorated with a crest!).

Just about the only thing that saves Penelope from a semester of isolated boredom is her participation in a modern interpretation of the absurdist play ‘Caligula’ – questionably improved to include a marionette act and light show. Penelope may have no people skills to speak of. She may be a social outcast of the highest order – but that doesn’t mean everyone around her isn’t absolutely absurd.

‘Penelope’ is the debut novel by Rebecca Harrington.

This book is a pretty impressive amalgamation of other things I love. The omniscient narrator reminded me of the voice in ‘500 Days of Summer’, with a pinch of Wes Anderson storytelling style (think: 'Rushmore'). There’s a certain whiff of ‘Gilmore Girls’ for Rory’s college days, particularly her interactions with the ‘Life and Death Brigade’. It’s also a modern spin on the ‘Brideshead Revisited’, but instead of depicting a Golden Age, Harrington is more pointing out the insipid, over-educated middle-classers of the modern Ivy League era (there's a character called Bitty, nuff' said). In short: this book is brilliant, I think Penelope is my fictional soul-mate and I pretty much want to live inside Rebecca Harrington’s brain, (if that isn’t too weird).
I’m calling this book ‘New Adult Satire' – because it’s really the first young adult/new adult book I’ve read that isn’t all about the complications of love and sex in your early 20’s, but is rather an absurdist look at the entire university experience, through the eyes of an astute social outcast who is thrown into the societal deep-end at University. Needless to say, shenanigans follow.


One of Penelope’s more unfortunate qualities was her tendency to view social occasions, such as parties, as cataclysmic events that would shape her destiny. She was often disappointed. Disappointment, however, did not lead to greater insight. Penelope still applied her eyeliner with a certain fatalism even before the most banal of activities, such as grocery shopping.

Penelope is sublime. She’s an exaggerated version of me (and every other bookworm misfit) who deadpans to perfection, has a ‘Dirty Dancing: Havana Nights’ poster (P.S. – I own the DVD and soundtrack!) and has never really understood the concept of ‘friends’ or how to acquire them. And, really, Harvard is the worst possible place for Penelope to learn the in’s and out’s of human interaction – because all her fellow classmates are high-strung over-achievers who have been planning their careers since they were in the womb.


“Did you hear about Nikil?” asked Catherine, encasing Penelope’s arm in a viselike grip.

“He didn’t get on the Crimson Business Board. He got cut.”

“He’s really upset,” said Catherine with relish. “I feel awful for him.”

“It’s too bad that even things that seem so un-fun are also so competitive,” said Penelope, “This was why I have always been against the Olympics, as a rule.”

Then there are the upper-crust darlings for whom Harvard is a pleasant jaunt between gap-years and settling into a cosy job in their parents business, never to work again. Unfortunately, Penelope falls for such a character in the illusive-fop, Gustav, and with him she encounters her first stirrings of lust and wanting; she hasn’t felt this intensely about a person of the opposite sex since Poirot! But, really, ‘Penelope’ is all about mapping the rough terrain of friendship. It’s blown hilariously out of proportion for Penelope, who’d rather play Tetris than interact with people at a party, but everyone who has made the transition from high school to university can appreciate that dreaded moment when you ask yourself; “how do you make friends again? Do handshakes work? What did I do on the playground in primary school? Should I hold up a sign? Put out an ad?”


What was the secret? How do you have friends? How do you make people want you around? Penelope always thought that if a person just said “Hello!” and “Cool” and “Awesome” and didn’t get mad that everyone would like that person, because what can you say about them except for positive things? They were inoffensive, like a beloved butler or cook. But even that didn’t guarantee anything. Maybe you were just the type of person that people liked well enough but not well enough to invite you to an arboretum. It was almost as if they didn’t like you at all.

Harrington’s writing is sublime – her absurd characters are pitch-perfect and it’s not at all surprising to discover that she is Harvard alum. She’s sometimes uncomfortably astute, particularly when it comes to capturing voice, so you’ll find yourself wincing from the accurate overuse of words ‘like’ and ‘literally’. Example: “I literally don’t even know why. They were like my really good friends.” I’m recommending this book to all my friends as a must-read for the sake of our friendship. Seriously; ‘Penelope’ is the sort of divisive book to obsess over that will make-or-break a friendship if they don’t love it as much as you do. I’m calling it as a favourite book of 2013, and I’m crossing my fingers for a trilogy (Penelope as sophomore and senior – just MORE PENELOPE, please!)