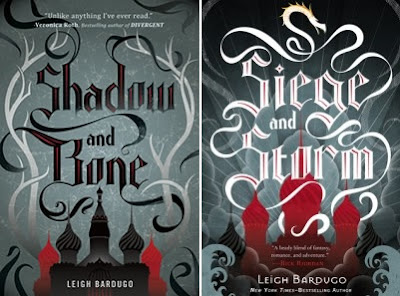 From the BLURB of ‘Shadow and Bone’

Surrounded by enemies, the once-great nation of Ravka has been torn in two by the Shadow Fold, a swath of near impenetrable darkness crawling with monsters who feast on human flesh. Now its fate may rest on the shoulders of one lonely refugee.

Alina Starkov has never been good at anything. But when her regiment is attacked on the Fold and her best friend is brutally injured, Alina reveals a dormant power that saves his life—a power that could be the key to setting her war-ravaged country free. Wrenched from everything she knows, Alina is whisked away to the royal court to be trained as a member of the Grisha, the magical elite led by the mysterious Darkling.

Yet nothing in this lavish world is what it seems. With darkness looming and an entire kingdom depending on her untamed power, Alina will have to confront the secrets of the Grisha…and the secrets of her heart.

In this world The Grisha rule – they are a magical elite, also known as the Soldiers of the Second Army. They practice the Small Science: able to manipulate matter at its most fundamental levels. Led by The Darkling, who brings about darkness and has a lethal weapon called The Cut, which can rend a man in two with just the swipe of his bare hands. Then there is The Corporalki - Order of the Living and the Dead. Etherealki - Order of Summoners. And Materialki - Order of Fabrikators. The Grisha’s Second Army are led by The Darkling himself, but there is unrest amongst the peasants, and the Darkling fears for the age of The Grisha …

Alina Starkov is a mapmaker in Ravka’s first army; before that, she was a fellow orphan of Duke Keramsov's along with her childhood friend, Mal, now a tracker in the first army. They are currently marching on The Fold – a black and desolate expanse of nightmare created by The Black Heretic; a powerful and evil Grisha who lived and died hundreds of years ago. The Fold is now guarded by Volcra – flying beasts rumoured to have once been humans, but are now blind and bloodthirsty.

Alina is troubled by the march ahead, and by her increasing jealousy towards all the girls that Mal flirts and beds; because she knows he’ll never think of her that way. The night before they enter The Fold, Alina and Mal share a moment together, reminiscing on how far they have come since being orphaned children of the peasant class …

But Alina’s unrest isn’t entirely unwarranted. When they march on The Fold, first army is overwhelmed and swarmed by Volcra – men are dying before Alina’s eyes, and Mal is almost killed … and then a beautiful, blinding light …

When Alina wakes, she is dragged before The Darkling himself, and tested. She is cut and exposed, and revealed to be the Sun Summoner – The Darkling’s perfect balance, who can call on light where he is dark, and the next most powerful Grisha ever discovered, who will change the world with him.

‘Shadow and Bone’ and ‘Siege and Storm’ are books #1 and #2 in a new dark YA fantasy trilogy called ‘The Grisha’, from Leigh Bardugo.

I owe a great deal of gratitude to book blog ‘the midnight garden’ and Wendy Darling in particular. They were writing such tempting reviews and keeping a steady fangirl commentary on Twitter, to the point that I could ignore their praise of Leigh Bardugo and ‘The Grisha’ no more, and simply had to see for myself what all the fuss was about … Well, wasn’t I missing out? Here is a dark and delicious YA fantasy series, mired in Russian history and folklore and delivering one of the best female heroines I’ve read in a long time.

What I love about ‘The Grisha’, and the character of Alina in particular, is that Leigh Bardugo starts out following the usual fantasy tropes. Here is an ordinary girl (peasant, no less!) plucked from obscurity to be pronounced as one of the most powerful magic-users in the world. Following her discovery, she is whisked away to The King's Grand Palace in Os Alta, and promised by the Darkling that she’ll help him renew the reign of Grisha and bring peace to The Fold … but here is where the ‘dream come true’ fantasy ends.

The reality is that Alina has denied her true nature for so long, she can barely summon a spark let alone sunlight. And as majestic as Os Alta is, and with the handsome Darkling encouraging her and a new friend called Genya by her side … Alina cannot forget her best friend and unrequited love, Mal.


Maybe I would wake tomorrow and find that it had all been a dream, that Alexei was still alive and Mal was unhurt, that no one had tried to kill me, that I'd never met the King and Queen or seen the Apparat, or felt the Darkling’s hand on the nape of my neck. Maybe I would wake to smell the campfires burning, safe in my own clothes, on my little cot, and I could tell Mal all about this strange and terrifying, but very beautiful, dream.

I rubbed my thumb over the scar in my palm and heard Mal’s voice saying, “We’ll be okay, Alina. We always are.”

“I hope so, Mal,” I whispered into my pillow and let my tears carry me to sleep.

And then Leigh Bardugo continues to blow tropes and truism out of the water – the love triangle turns sharp, the darkly delicious love interest reveals his villainous nature and the good guys don’t always finish first (or unscathed). I went into first book, ‘Shadow and Bone’, happily enraptured by this tale of peasant-turned-saviour and hopeful of romantic tension between the dark hero and unknowing best friend. But by ‘Siege and Storm’ I was thriving in the upheaval of it all; I found myself hoping against hope for redemption for the villain, and cut to the quick by the soured romance between Alina and her perfect hero.

I really don’t want to give too much away because, as I say, you go into ‘Shadow and Bone’ with certain ideas and expectations and by ‘Siege and Storm’ Bardugo has left her readers as battered and bruised as her characters. For third book ‘Ruin and Rising’ (an entirely too far away, 2014 release) I’m going to be prepared to duck & cover.

A real strength of ‘The Grisha’ is in Bardugo’s unique Russian emphasis that’s not so overwhelming that it feels like you’re slogging through Tolstoy, but lends itself to the dark atmosphere and fairytale/fantasy quality. Another big draw is in the secondary characters (who are curveballs in themselves!) take privateer Sturmhond, for example, who first appears in ‘Siege and Storm’ and steals the limelight with his swashbuckling cheekiness;


Mal crossed his arms and considered the privateer. “I can’t decide if you’re crazy or stupid.”

“I have so many good qualities,” Sturmhond said. “It can be hard to choose.”

‘The Grisha’ is a truly brilliant series that I enjoyed falling into. It’s certainly a series in which nothing is as it seems, and readers should think twice before rooting for any one hero to win our heroine’s heart … I can’t wait for ‘Ruin & Rising’ in 2014, though I expect this series won’t be one that invites a happily-ever-after ending. 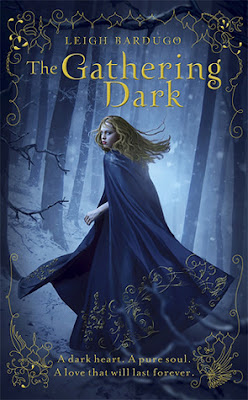 'Shadow and Bone' is called 'The Gathering Dark' in Australia
Posted by Danielle at 7:33 PM

Email ThisBlogThis!Share to TwitterShare to FacebookShare to Pinterest
Labels: Leigh Bardugo, The Grisha, YA