'The Husband's Secret' by Liane Moriarty 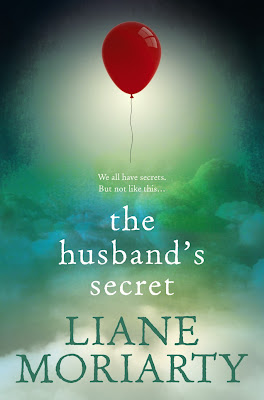 "For my wife, Cecilia Fitzpatrick
To be opened only in the event of my death"

But Cecilia's husband isn't dead, he's on a business trip. And when she questions him about it on the phone, Cecilia senses something she hasn't experienced before. John-Paul is lying.

What happens next changes Cecilia's formerly blissful suburban existence forever, and the consequences will be life-changing for the most unexpected people.

Lianne Moriarty’s new novel begins with a bit of Greek Mythology, and the story of poor Pandora who’s been given a bad rap and turned into a sorry metaphor over time, especially considering “nobody said a word about not opening it!”

It’s an apt metaphor, indeed. The unsuspecting and fair Pandora who didn’t know what she was getting herself into when she innocently opened a jar and unleashed horrors onto the world. Cut to modern-day Sydney and Cecilia Fitzpatrick is wrestling with her conscience about opening a letter her husband never thought she’d find, to be opened only in the event of his death (which is a problem, since he’s still very much alive and healthy). Cecilia is an upstanding citizen and beyond-reproach mum at St. Angela’s primary school, where her three daughters are currently attending. Cecilia is a good Catholic, a superb Tupperware saleswoman and loving wife to equally upstanding John-Paul. But this letter is nagging at her – especially when John-Paul is thrown into a fit over it, and her daughters start sharing their own concerns about dad’s behaviour. . .

In Melbourne, Tess O’Leary has just had a veritable Pandora’s Box blown up in her face, when her husband Will and beloved cousin (more like sister), Felicity, announce their pious love and declare that they’d very much like to start a relationship . . . Tess is shaken to her core, and fuelled with hate. Herself a socially awkward by-product of divorce, and with her young son Liam to consider, she decides to leave her husband and cousin to their debauchery in the hopes they come to their senses – she and Liam leave for Sydney, to stay with her ailing mother and escape the heartache. But while trying to escape the deluge, Tess runs into an old flame and PE teacher at St. Angela’s where she’s just enrolled Liam. Connor Whitby was a blip on Tess’s romantic past, but seeing him again (and aged into a right spunk!) pulls a passion out of Tess that surprises her as much as Will and Felicity’s betrayal.

And then there’s Rachel Crowley, who is hoping to pry open an ages-old Pandora secret. Rachel works administration at St. Angela’s; she is a besotted grandmother to Jacob and widowed wife who is terrified when her son, Rob, and his wife announce they’ll be packing their bags and living in New York for two years. Rachel is also the mother of Janie Crowley – the girl who was famously murdered in 1984, strangled to death and her body left in the local park with rosary beads the only clue to her murder. To this day, the police have no real suspects – though Rachel personally believes Connor Whitby to have ‘lies in his eyes’, as the last person to have seen her daughter alive . . .

While there are certainly plenty of Pandora-esque tragedies and catastrophies flying around this book, Moriarty plays out a few more metaphors than just the Greek. There’s a biblical ‘eye for an eye’ element running throughout, as these three women test their convictions and heartaches, measure their anger against forgiveness and seek very different retributions against the backdrop of St. Angela’s primary school. Then there’s also the history of the Berlin Wall running concurrently – as Cecilia’s daughter is obsessed with history and has turned her mind to the Cold War, escape artists and the momentous historical collapse of the wall. The Berlin Wall being a metaphor for sealing in and keeping out . . . but also, perhaps, the inevitability of collapse – that secrets very rarely remain kept forever, and walls once put up are bound to come crashing down.

I adored this book. I previously read and loved Moriarty’s 'The Hypnotist's Love Story' and vowed to read whatever she came up with next – though I have no idea why I waited so long (a full month!) to read ‘The Husband’s Secret’. This book hooked me in the first chapter, and by the fourth I was inwardly snarling at anything that kept my away from reading more, more, more (very annoying while reading on the train and making my destination – I did consider just doing a continuous loop until I got to the end of the book).

There’s a big ‘what if?’, ‘Sliding Doors’ element to this book. Rachel blames herself for running seven minutes late on Janie’s last day – seven minutes that might have meant she’d been waiting for her mum instead of walking home through the park. Tess starts thinking what could have been when she runs into Connor Whitby after so many years, and so much recent heartbreak. And Cecilia blames the Berlin Wall (and foraging in the attic for a souvenir piece) for her uncovering her husband’s letter, and eventually his secret. . . Moriarty weaves this in beautifully to the book, and very occasionally an omniscient narrator reveals what was lost and gained from the small variants of life.

I suppose ‘The Husband’s Secret’ could be said to be all about wives and mothers, as the three main characters very much are. But Moriarty also examines her protagonists as women, which I found really interesting. It was little things – Janie Crowley vulnerable as she walked through the park, Tess driving late one night and noticing a man walking home (musing that a woman would never think to do that). It was Cecilia raising her daughters;

Cecilia noticed that beautiful women held themselves differently; they swayed like palm trees in the breeze of all that attention Cecilia wanted her daughters to run and stride and stomp. She didn’t want Polly to bloody sway.


And while this is a novel about marriages, Moriarty swerves away from the usual line of ‘nobody really knows what goes on in a marriage apart from the people involved’. . . instead, she explores the possibility that even then, those involved in the marriage don’t know themselves at all;


I would say this is also a book about anger and morals and how those two are sometimes intertwined, but more often at loggerheads. And Moriarty captured anger so well that I could taste the metallic indignation, like blood, on the tip of my tongue in some paragraphs;

Cecilia thought she’d experienced anger before, plenty of times, but now she knew that she’d had no idea how real anger felt. The white-hot burning purity of it. It was a frantic, crazy, wonderful feeling. She felt like she could fly. She could fly across the room, like a demon, and claw bloody scratch marks down John-Paul’s face.


This is a superb novel that, upon finishing, I instantly wanted to pass on to someone else to read so I could talk about it with them. I think these characters are going to stay with me for a good long while, and I don’t think I’ll ever really be settled or comfortable with the decisions they made throughout this book (I’ll always think “what if?”). I’ll never again make the mistake of waiting one whole month to read a Liane Moriarty novel.