'The First Third' by Will Kostakis 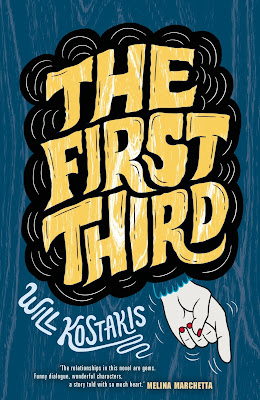 Life is made up of three parts: in The First Third, you're embarrassed by your family; in the second, you make a family of your own; and in the end, you just embarrass the family you've made.

That's how Billy's grandmother explains it, anyway. She's given him her bucket list (cue embarrassment), and now, it's his job to glue their family back together.

No pressure or anything.

Fixing his family's not going to be easy and Billy's not ready for change. But as he soon discovers, the first third has to end some time. And then what?

It's a Greek tragedy waiting to happen.

Bill is having a bad year. Possibly, a bad life.

It starts when a girl called Mia gives him his first ever kiss, and then runs away.

But things get worse when Bill’s beloved Yiayia (grandmother) collapses in church and is hospitalized. While on bed rest she comes up with a bucket list for him to complete, and fix his family. Nevermind that 18-year-old Bill can’t imagine a world without his Yiayia, but his family’s problems aren’t exactly easy fixer-uppers…

His dad left when he was younger, and now his mum has suddenly decided to re-enter the dating pool. She turns to Bill for fashion and sexting advice, and there’s just not enough therapy in the world.

His younger brother, Peter, has withdrawn from the family over some undisclosed altercation that nobody can remember but Peter is holding on to for dear life.

Older brother, Simon, is living the high-life all the way in Queensland where he can date boys and not break his Yiayia’s (grandmother’s) heart.

Bill’s best friend is Lucas, nicknamed ‘Sticks’ for the walking sticks he uses because of his cerebral palsy. While Bill’s life spins more and more out of control, and starts to look like a Greek tragedy, Lucas is there to help and offer advice – but he has his own struggles; like finding a nice boy who likes him for him, in spite or regardless of his disability.

‘The First Third’ is the new young adult novel from Australian author, Will Kostakis.

I’m trying to think of how I’ll summarise this book and why I so enjoyed it, and the best descriptor I can come up with is this; it had a lot of heart.

Maybe that sounds empty and trite, but there you go.

There’s clearly some truth that’s stranger than fiction going on in ‘The First Third’, and I suspect that Will Kostakis has borrowed heavily (if not, entirely?) from his own life in the writing. The giveaway is in the aforementioned heart, and the acknowledgements page (plus: Bill/Will. Not a stretch). I think Will being so close to this book is what gives it that pulsing heartbeat – there’s affection on every page, for the characters and their somewhat impossible situations. And even amidst fractures and heartbreak, Bill/Will has a ringing loyalty that’s impossible not to admire.

The standout relationship in the book is between Bill and his Yiayia (and in case you’re wondering; it’s ‘yiayiathes’ plural). She’s quite a character from the old world; a good Greek grandma who feeds her grandsons up, meddles to her heart’s content and calls sheets ‘shits’, to many a salesperson’s mortification. I loved this book early on, from the moment that Bill recounts the lessons in love his Yiayia imparted, and the difference between lasagne and moussaka;

I was fourteen when my grandmother taught me about love and the difference between moussaka and lasagne. The two were apparently related. She called me into her kitchen where she’d laid them side by side, the moussaka made from scratch, and the lasagne, store-bought and still in its aluminium tray.

‘This,’ she explained, pointing to the lasagne, ‘you buy. Easy. But it not special. You get five, ten. No hard. You just pay more. Moussaka,’ she pointed to the homemade dish, ‘is different. The tray keep lasagne together, but the moussaka, look – it break easy. Because it fresh. Less cheese, more eggplant, more oil. It better for you and you make with agape, love. Yes? This,’ she pointed to the lasagne, ‘is Australian girl.’


Will writes about Yiayia and Bill’s deep affection for her with heart-on-sleeve honesty. And what I loved is that Bill’s never embarrassed by her, though she does some lost-in-translation/generation guffaws. It often happens in YA novels that adults and parents are lost from the page, swept under the rug and forgotten. That’s certainly not the case in ‘The First Third’, in which family takes centre stage. But it was so nice to read about a grandparent having importance in Bill’s young life. No doubt there will be comparisons to Josie and her Nonna and Melina Marchetta in general for the multigenerational family life – but where ‘Looking for Alibrandi’ was about railing against the old ways and sometimes suffocating family, Bill in ‘The First Third’ is more accepting and can even appreciate his Yiayia’s wisdom and what she’s taught him about family.

There is a romance in this book, but I don’t want to give it away because I was surprised at the girl that caught Bill’s eye in the end. The romance worked for me, but I think there’s a lot more than just the romantic love in this book to champion. For instance, Bill has a lot of love for his best friend, Lucas ‘Sticks’. He has such affection for his best-friend-since-boyhood, and it came across in their loyalty to one another, but also in the little things like Bill describing Lucas’s laugh:

Sticks channelled Boromir’s seriousness. ‘One does not simply walk into Malvern.’


That’s just gorgeous. And, actually, Lucas was probably my favourite character after Yiayia. He was interesting for being opposite to Bill in his battles. Where Bill seemed one to fall hard and fast for a girl (or two), Lucas keeps quite a reserved heart because he knows that people see him differently because of his cerebral palsy. And where Bill’s family life is quite fractured in this book, Lucas’s is a fortress around him – with an older brother and strong father who’ll thump anyone who dares say anything derogatory about Lucas’s sexuality, to a mother who won’t leave the room without an ‘I love you too.’ I just loved Lucas. He was funny and affectionate; he collects souvenirs from his raucous nights out and protects Bill with a fierceness that you don’t often read in male friendships. I want more Lucas, and I cross my fingers that Will has a book planned just for him.

I’ve also got to say that ‘The First Third’ is funny. Will has a whip-quick, snarky and sharp sense of humour that is self-deprecating, pop-culture ridden and observantly wicked. There were some times when I wished the jokes didn’t come so hard and fast and on every page, but that mostly comes from me thinking that he had such beautiful connections and tragedies in this book that sometimes just letting them lie and hurt a bit was needed, rather than cushioning with humour.

I can only go back to my initial thoughts, that ‘The First Third’ has real heart. This book reads like Will Kostakis putting his heart on his sleeve and his family on the page, and the result is nothing short of magnificent.

Email ThisBlogThis!Share to TwitterShare to FacebookShare to Pinterest
Labels: Aussie YA, Australian YA, Publisher Review, Will Kostakis