'The Longest Holiday' by Paige Toon 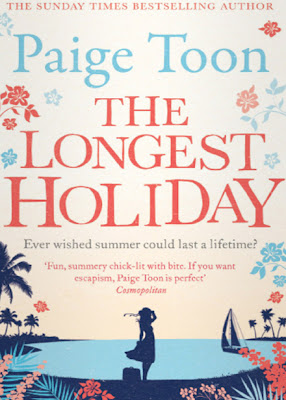 
He's smiling down at me with tears in his eyes as I say my solemn vow:
'I, Laura, take thee, Matthew, to be my lawful wedded husband…' I thought I would never feel like this about anyone ever again. Not after my first love… Not after the heartbreak and the loss and the trying to pick myself back up again… Then I met Matthew, and I know that he has my heart forever: my perfect, gorgeous, adoring Matthew. And then I wake up. And I remember that he's not perfect. He's so far from perfect that my heart could surely collapse from the pain that instantly engulfs me…


To say Laura is unlucky in love is an understatement. Her first boyfriend died in a horrific accident, and now she's just discovered that her husband of six months has been hiding a terrible secret. Devastated and unwilling to face reality, she escapes on a girls' holiday to Key West with her best friend Marty. But a deep and instant attraction to a sexy Cuban scuba diver takes her completely by surprise. When her two weeks in the sun come to an end, Laura doesn't want to go home again. But she can't run from real life forever. Can she?

For a little while there, Laura Perry had it all after losing so much.

Years ago her first love, Formula One champion Will Trust, died in a car racing accident. And then Laura met Matthew Perry; a journalist with beautiful blue eyes and she found love again. They were married shortly after meeting, and had been enjoying a blissful marriage of seven months when a Facebook message ruins it all. Turns out, Matthew drunkenly cheated on Laura at his stag do. He shagged a girl in the toilets and now this Tessa is contacting him (conveniently remembering his name-association with TV show ‘Friends’) to say that she’s pregnant. Seven months pregnant, and he’s the father. Laura suddenly finds herself a blushing new bride with a husband who is going to have a baby with another woman. And Matthew, being a good man, wants to be part of the baby’s life. He doesn’t want to be an absentee dad.

The only thing for Laura to do is run far, far away from London – to Key West, to be precise, with her best friend Marty and tag-along Bridget.

Laura spends lazy days by the beach, drinking too much and trying not to fall apart at every text message Matthew sends, begging her to come home and sort things out with him.

And then Laura meets Leo – a local diving instructor. He has movie-star good looks and secrets behind his piercing eyes. As Laura gets dangerously closer to him, she starts to wonder if he’s a distraction from the destruction of her life – or something more? It doesn’t help that all her friends and family are begging her to come home and choose Matthew, but what she feels for Leo can’t be so easily dismissed …

‘The Longest Holiday’ is the new novel from romance writer, Paige Toon.

You’d think I wouldn’t touch another Paige Toon novel with a ten-foot pole, after giving the laughably lacklustre ‘Pictures of Lily’ a 1.5/5 rating back in 2011. But, here I am, the Queen of wishful thinking.

I glimpsed the premise of ‘The Longest Holiday’ and was intrigued because it reminded me, bizarrely, of Melina Marchetta’s ‘The Piper’s Son.’ My favourite character in that book is Georgie, a woman who is 42 and pregnant to Sam, the man who cheated on her seven years ago and got a child out of his indiscretion. I loved them, and despite their rocky road they are amongst the most romantic couplings I’ve ever read. Their entire history intrigued me, and I loved the messy heartbreak they both had to overcome to be together. So, in reading this blurb it was less the Key West & Leo stuff that had me pushing past my last Paige Toon disappointment, and giving this book a chance … except (and I really shouldn’t be surprised by this) Toon herself is more intrigued with the boring, easy, mushy Leo stuff and that’s what the book focuses on. More’s the pity.

‘The Longest Holiday’ starts from the moment Laura is on the plane, heading into Key West. She’s clearly fragile and weepy, unable to escape her mind ticking over Matthew’s cheating and the bundle of ‘joy’ that’s to be a constant reminder of it. For the first few chapters Laura is understandably mopey while in Key West sunshine. But then she meets Leo and is dazzled by his movie-star good looks (Toon categorizes ad nauseum; his bulging arm muscles and Pavlov’s Abs that trigger Laura’s drool every time he gets shirtless…). Leo is a local dive instructor with a Cuban background and a ramshackle house that sits beside Laura’s hotel. He lives with his hodge-podge family: a half-brother, sister-in-law, nephew and a dog. Laura is intrigued, and when she opts for dive lessons she gets ever closer to him … until the time comes when she has to return to the UK. But just as she’s about to get on board the plane, Matthew rings to say his baby son has been born. Laura cannot cope, and so decides to spend her entire summer in Key West, determinedly dodging her awaiting heartbreak in the UK. In deciding to stay, she also inadvertently decides to see if she and Leo have more than just chemistry between them…

Look, I’m of the belief that readers quite like to poke at character’s bruises. There’s just something torturously delectable about reading someone else’s heavily fractured life – and infidelity plots are the best types of fictional itches to scratch. And Laura’s is particularly gruesome and intriguing. But Toon barely touches on it. Instead, Laura ignores texts from Matthew or plays a loop of the same conversation with him “I need space. I need time. I’m not coming home.” Now, on the one hand I really wanted Laura to go home and yell at Matthew. I wanted to poke that bruise of hers and see her back in the UK as her life and love slowly unravels … But on the other hand, Toon doesn’t really make Matthew that appealing a suitor. I think she tried to put Laura between a rock and a (rock hard abs) place, but Leo and Matthew are very unbalanced. Leo’s all brooding secrets and movie-star good looks, while Matthew’s just the drip who keeps interrupting sexy times with his text messages and is a broken record saying “I love you, Laura. Come home, Laura.” Gag. Toon tries to bring some appeal to Matthew through abysmal flashbacks of ‘happier times’ – but they left me cold and distant, too short to mean anything to me, and too vapid to mean anything to Laura.

That being said, in relation to Laura I didn’t find Matthew appealing. But by himself? Well, I’d actually quite like to read his story and the complications of having a baby with your one-night-stand that contributed to the end of your marriage with the woman you love. Toon, I think, hints at a possible trajectory for Matthew in that he went to Uni with Tessa’s sister (Argh! Wouldn’t that be a tricky love triangle) – and even though I’ve now had two misses with her, if she was to write a book about Matthew, I’d probably read it.

‘The Longest Holiday’ failed big time for me on two HUGE counts. One is that Laura is quite vapid and useless. There’s much made of the fact that loving Matthew helped her out of her depression over Will dying. Now we meet her when loving Leo helps her out of her depressive spiral over the end of her marriage to Matthew. She’s portrayed as entirely dependent on men (and really, really ridiculously good looking ones, at that – shallow much?).

The second thing was the ending – which is laughably soap opera dramatic and sudden. Never mind that the big twist isn’t even properly concluded, but rather jumped to a clunky epilogue that sweeps everything Toon didn’t seem able to cover under the rug.

You’d think I’ve learned my lesson about Paige Toon … but as I said, if she has a novel for Matthew up her sleeve I’ll probably read it, because his story was a million times more juicy and delicious than sad-sap, male-dependent Laura’s could ever be. Props for setting up Matthew’s twistingly complicated story, but that’s about it.