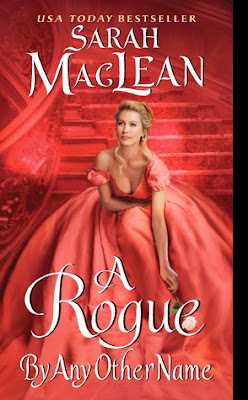 A decade ago, the Marquess of Bourne was cast from society with nothing but his title. Now a partner in London’s most exclusive gaming hell, the cold, ruthless Bourne will do whatever it takes to regain his inheritance—including marrying perfect, proper Lady Penelope Marbury.

A broken engagement and years of disappointing courtships have left Penelope with little interest in a quiet, comfortable marriage, and a longing for something more. How lucky that her new husband has access to such unexplored pleasures.

Bourne may be a prince of London’s underworld, but he vows to keep Penelope untouched by its wickedness—a challenge indeed as the lady discovers her own desires, and her willingness to wager anything for them... even her heart.

Lady Penelope Marbury is still whispered about at ton parties. She was the perfect debutante seven years ago, and quickly snatched up by a Duke and set on a path for great things . . . until she was forced to end her engagement and that same Duke went on to marry his true love. Now Penelope is an aging spinster, whose wrecked engagement and consequent refusals led two of her sisters into mundane marriages, and could possibly tarnish the future engagements of her two younger sisters. Not to mention there will come a time when being a spinster will be a hindrance on her parents, and possibly leave her destitute . . .

When Penelope’s childhood friend, Tommy Alles, offers her a last-ditch “Why not?” proposal Penelope is tempted, but refuses. And when she discovers Tommy’s ulterior motive for proposing, she’s glad of her decision. Because her father has unknowing attached lands to her dowry, lands that are adjacent to Tommy’s inheritance and were once owned by their oldest friend . . . until he lost it all in a game of chance.

Michael, the Marquess of Bourne was a grieving twenty-one-year-old when he lost his entire fortune and inheritance to Tommy’s father in a rigged game of chance. Since then he has done everything in his power to get titles and money back; mostly thanks to his partnership in London’s most legendary gaming hell, The Fallen Angel. The only thing missing in Bourne’s life is his father’s estate of Falconwell, and revenge on Tommy’s father. So when Bourne hears word that his oldest, forgotten childhood friend now has Falconwell tied up in her dowry, he decides to stop at nothing to get her and his home back.

‘A Rogue by Any Other Name’ is the first boo in Sarah MacLean’s historical romance series, ‘The Rules of Scoundrels’.

This book was a birthday present from Persnickety Snark (thank you, Adele!) who was gobsmacked that I'd never read a MacLean his-rom before. Well, I thought, is she really as good as Lisa Kleypas, Elizabeth Hoyt and Jennifer Ashley? My go-to authors in this genre?
Answer: Ummmmmm – YES!

Interspersed throughout this story are childhood letters exchanged between Penelope and her best friend, Michael. While he was away at Eton and she was learning to be a polite young lady, but they always stayed in contact . . . until the day his parents died in a terrible carriage accident, and then she started writing letters with no hope of reply.

Meanwhile the story unfolds of how these old friends are reacquainted under the most dubious of circumstances;


Indeed, as much as Penelope searches this new, hard face, she could not seem to find the boy she’d once known. If not for the eyes, she would not have believed it was him at all.

“How sad,” she whispered to herself.

She shook her head, meeting his gaze, the only thing familiar about him. “He’s gone.”


When Michael discovers that this forgotten friend has his old lands attached to her dowry, he kidnaps her in the middle of the night and they come to an arrangement, of sorts. She’ll agree to marry him, he’ll get his lands back, but in exchange he will help her put-upon sisters make a good match. To do this, Bourne must enter back into society and he and Penelope must appear to have made a love-match and not the scandalous marriage of reality.

I loved this book. Penelope (love that name!) is one of the best historical romance heroines. Throughout the book we’re told that she’s plain (pretty, perhaps, in her youth) and the spinster-label haunts her. But Penelope is fiery and funny, and as the book progresses Bourne thinks others fools for not recognizing her as beautiful. Michael Bourne, meanwhile, lived up to Adele’s promise of a darn good rake. He’s full of vengeance and violence, but there’s hope there because he knows from the first that Penelope is too good for him. A lot of the book is about him thinking he’s not good enough for his best friend, and that everything he touches he ruins.

I did love this book, and I’m so excited to get stuck into the second, ‘One Good Earl Deserves a Lover’ which is about Penelope’s sister, Phillipa, who already has me intrigued because she wears spectacles, loves science (and once dissected an animal in her bedroom) and needs saving from a marriage to a complete twit.

Yes, I confess, I was missing something by not reading Sarah MacLean. Now I’m so glad I have her backlist to trawl through for the next few months. 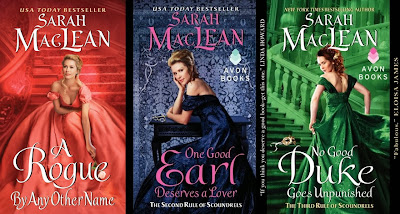 Email ThisBlogThis!Share to TwitterShare to FacebookShare to Pinterest
Labels: Sarah MacLean, The Rules of Scoundrels