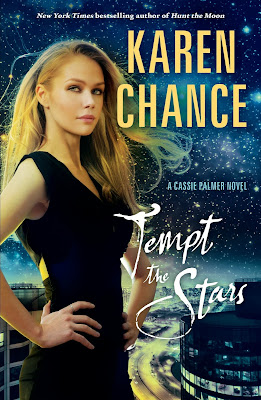 Being a goddess is a lot less fun than you might think. Especially when you’re only a half goddess, and you only found out about it recently, and you still don’t know what you’re doing half the time. And when you’ve just used your not-so-reliable powers to burglarize the booby-trapped office of a vampire mob boss.

But that’s just the tip of the iceberg for Cassandra Palmer, aka the Pythia, the freshly minted chief seer of the supernatural world. After all, Cassie still has to save a friend from a fate worse than death, deal with an increasingly possessive master vampire, and prevent a party of her own acolytes from unleashing a storm of fury upon the world. Totally just your average day at the office, right?

‘Tempt the Stars’ is the 6th book in Karen Chance’s ‘Cassandra Palmer’ series.

It’s been two years since fans last caught up with their favourite Pythia, Cassandra Palmer. Fans should go into this book remembering that even though it’s been a long wait and this is now the 6th instalment, the timeline in the ‘Cassandra Palmer’ universe is still only a few weeks after the events of first book, ‘Touch the Dark’. I know – yikes! But this is an important aspect of the series to remember when you feel like grumbling about the lagging process in Cassie’s romantic entanglements with dark mage, Pritkin, and vampire “husband” Mircea. It’s also something to keep in mind when you think that this is a series with lots of time-travel elements that means the timeline has snapped and stretched like an elastic band over six books.

So, ‘Tempt the Stars’ kicks off where ‘Hunt the Moon’ ended – an epic battle saw Cassie’s bodyguard mage Pritkin (aka ‘Merlin’) sacrifice himself and he’s currently toiling away in hell working for his father, Rosier. Considering the way things heated up between Pritkin and Cassie in the last book, you can imagine that she’s pretty eager to drag him out of there ASAP.

The book takes place over two days – but that’s two days of backwards-forwards time travel and leaps to other dimensions (did I mention this series has a tricky timeline?). A whole host of new characters are introduced to a series that’s had pretty much the same, steady cast for six books – and ‘Tempt the Stars’ is all the better for these new introductions. Readers will also be pleased to learn a lot more about Cassie’s past in this book and exactly how little Cassie knows about herself because her parents were taken from her when he was so young.

I’m sad to say that Team Pritkin win the battle in this sixth instalment, and will be very pleased with themselves. If the book loses any points from me it’s because I remain a staunch Team Mircea fan-girl and he does not make an appearance in this book (the first he hasn’t appeared in since the beginning of the series!). I know that Chance released a third Dorina Basarab book last year, called ‘Fury's Kiss’, which I have not read yet. I’m hoping that Mircea’s absence in the latest Cassie Palmer is because he had a role to play in his daughter’s spin-off series, and as such I have bumped ‘Fury's Kiss’ up in my TBR pile (I need some sort of Mircea-fix!).

I always recommend the Cassie Palmer series to urban fantasy newcomers, and ‘Tempt the Stars’ just goes to show why. From ‘Touch the Dark’ to now, these characters and their relationships have come so far and gone through so many transformations together and now we’re into the sixth book and those relationships are starting to come to a calamitous, fascinating head. I can’t wait for more Cassie, and just hope it wont be two years until we meet again!