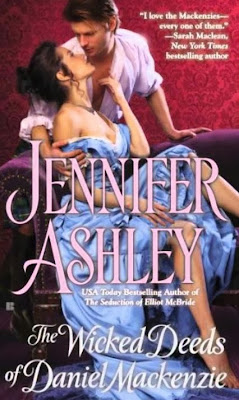 Daniel Mackenzie lives up to the reputation of the scandalous Mackenzie family—he has wealth, looks, and talent, and women love him. When he meets Violet Bastien—one of the most famous spiritual mediums in England—he immediately knows two things: that Miss Bastien is a fraud, and that he’s wildly attracted to her.

Violet knows she can’t really contact the other side, but she’s excellent at reading people. She discerns quickly that Daniel is intelligent and dangerous to her reputation, but she also finds him generous, handsome, and outrageously wicked. But spectres from Violet’s past threaten to destroy her, and she flees England, adopting yet another identity.

Daniel is determined to find the elusive Violet and pursue the passion he feels for her. And though Violet knows that her scandalous past will keep her from proper marriage, her attraction to Daniel is irresistible. It’s not until Daniel is the only one she can turn to that he proves he believes in something more than cold facts. He believes in love.

To settle a gambling debt, one of Daniel Mackenzie’s rotten opponents takes him to a tucked-away town house in the rough part of London. Here, Daniel is introduced to Violet Bastien – daughter to the city’s most famous medium – and promised a reading of his very own. It is here that Daniel witnesses nothing magical or mystical, but downright intriguing and smart. Violet has the parlour rigged with contraptions and mechanisms to fool punters into buying all her trickery fortune telling and ghost-talk. Daniel isn’t fooled for a second, but he’s impressed. Even more so when he remains behind and asks to see Violet’s various machines – amazed at the ingenuity of this woman.

And though she’s not as beautiful as some of the courtesan’s he’s sampled, Violet intrigues and beguiles Daniel … even as she’s clobbering him over the head for stealing a kiss … Even when she dumps his unconscious body outside a doctor’s house, and escapes into the night with her mother and maid.

Daniel is my favourite Mackenzie after his uncle Ian and father Cam. For that reason, I went into this sixth book with weary expectations … weary, because Once Upon a Time I would have declared eldest Mackenzie, Hart, my absolutely favourite of the Highland Pleasures brood. That was, until his book ‘The Duke's Perfect Wife’ when I think Jennifer Ashley made an abysmal attempt at writing Hart’s “dark delights” and turned him very sanitary and dull (despite his much-commented upon dastardly reputation of previous books). So, I love Daniel and have done ever since his lengthy appearance as secondary character in his dad’s book ‘The Many Sins of Lord Cameron’, in which he helped Cam to woo his lady love, Ainsley.

I admit, after reading the blurb for Daniel’s book (an older woman AND a medium? Oh, boy) I was highly sceptical and kept forcing myself to go in with lowered expectation. But, to my surprise, a truly stellar heroine and new facets to Daniel’s previously cheeky-Casanova persona make ‘The Wicked Deeds of Daniel Mackenzie’ one of Jennifer Ashley’s best thus far.

Yes, Violet is somewhat older than Daniel and daughter to a medium. Now, while Violet swears up and down that her mum is the real-deal (and very fragile for all her spirit-talking) Violet has a more calculating, mathematical mind and does invent gadgets to help her convince punters of a gift she does not possess. Violet and her mum have actually lived a really rough life because her mother has insisted on travelling the continent, sharing her gifts. For this reason, Violet is more a parent to her mother and has been in charge of keeping them from the law and sleazy marks. Though Violet hasn’t always been able to save herself, and she has the psychological scars to prove it.

Within a few moments of studying a man, Violet could understand what he loved and what he hated, what he wanted with all is heart and what he’d do to get it. She’d learned these lessons painstakingly from Jacobi in the backstreets of Paris, had been his best pupil. But she couldn’t read Mr. Mackenzie. He didn’t let anyone behind his barriers, not easily. But when he did … When he did, worlds would unfold.


I love, love, loved Violet. Previously Beth and Ainsley were my favourite Mackenzie wives, but Violet is now front-runner. She is older than Daniel, and she has had to be a parent to her own mother, but there’s something very innocent and childlike about Violet too … even despite having had to grow up fast. She doesn’t really trust anybody and imagines the worst in any situation, so for that reason when she starts developing feelings for Daniel and daring to imagine becoming part of his family – there’s a childlike wonder and hope to her that’s instantly catching.

And, of course, she’s wicked smart. Daniel loves to tinker with machinery and in this book he’s actually building a racing car and imagining a motorbike (or the ye olde equivalent of them, at least!) and she’s as captivated and fascinated by his blueprints as he is. This is, really, what attracts Daniel to her and everything else comes later – but her brain is the big pull for him throughout.

Now, Daniel surprised me in this book. He actually reminded me a lot of Ian, come to think of it. He’s so fascinated with machinery and lives in his own head that he can get that very determined, focused drive that Ian displays (though not to the same extent). I know in previous books much has been made of Daniel taking after his father’s footsteps in the lady-stakes (taking courtesans, and his first mistress at age fourteen or thereabouts) but in this book Ashley really hits home how much of a creative mind Daniel is and what a dreamer he can be. I liked seeing this side of him, though I do think I needed a bit more about his voracious love life to be reconciled.

If there was anything that frustrated me in the book, it’s the same old argument I’ve had since book three – more Cam & Ainsley! I feel like in all subsequent books since theirs, every other Mackenzie has had more than enough secondary character page-time. Lord knows Mac and Isabella are always clamouring across the page with their brood, and I’m thrilled that Ian is always very much intricate to his brother’s stories (he is in Daniel’s too). But Cam and Ainsley feel like the forgotten Mackenzies, and I was hoping that in his own son’s book Cam would make more of an appearance and us fans would have a chance to peek at the progress of his and Ainsley’s marriage (now with two little ones, half-siblings for Daniel). But, alas, Daniel speaks to Violet of the feeling of distance and disappointment he feels from his dad (and lengthy conversations the impact his mother’s insanity had on his life) but as for actual scenes with Cam, they are few and far between. Ainsley gets much more page-time with both Daniel and Violet, but Ashley keeps Cam stoically silent and gruff when all I wanted was some glimpses into his relationship with Daniel as it has now progressed into his son’s adulthood.

Still, ‘The Wicked Deeds of Daniel Mackenzie’ far exceeded my expectations and Daniel proves why he’s a favourite Mackenzie and his lady love is a formidable new lassie to bring into the family. This book almost makes up for Hart’s lackluster one … almost.