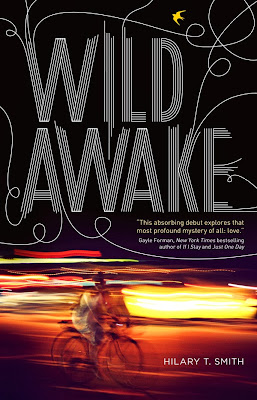 Things you earnestly believe will happen while your parents are away:

1. You will remember to water the azaleas.

2. You will take detailed, accurate messages.

3. You will call your older brother, Denny, if even the slightest thing goes wrong.

4. You and your best friend/bandmate Lukas will win Battle of the Bands.

5. Amid the thrill of victory, Lukas will finally realize you are the girl of his dreams.

1. A stranger calls who says he knew your sister.

4. You tell him your parents won’t be able to—

7. You scribble down the address.

*also, you fall in love, but not with Lukas.

Sukey was Kiri Byrd’s sister. Sukey died four years ago in a car accident, when Kiri was 12. One of Sukey’s paintings hangs in Kiri’s room, the last remnants of her sister with the words: We gamboled, star-clad. Sukey kept the sister painting, Daffodiliad.

When she was younger, Kiri hung on Sukey’s every word and desperately wanted to be as cool as her older sister and admired by her.

Whenever Sukey spoke, it was like I was eating one of the magical cakes in ‘Alice in Wonderland.’ I grew taller and taller until my head bumped the ceiling, and the unhappiness of an hour ago shrank to the size of a pebble on the ground.

Now Kiri is following, somewhat, in her deceased older sister’s footsteps. Except where Sukey was all about easels and paints, Kiri is a pianist extraordinaire in the making and music is her thing. For the few weeks that her parents are away on an anniversary cruise, Kiri is home alone and practicing diligently for an upcoming (all important) piano recital and a Battle of the Bands school competition she’s entering in with her crush, Lukas. Kiri’s plan is to blitz the recital and cement herself as a piano prodigy, turn Lukas from her sometimes-ear-lobe-touching band buddy into her proper boyfriend and water mum’s azaleas while the parents are away.

But then Kiri receives a phone call, about Sukey and what she left behind. And then nothing goes to plan.

Okay – confession. I was not cool enough to know precisely who Hilary T. Smith was before reading ‘Wild Awake’. Apparently, before being published, Smith was the formerly anonymous publishing industry blogger INTERN. I had never heard of INTERN before buzz about ‘Wild Awake’ had me reading bizarre author profiles of this woman who wrote her debut novel while living off-the-grid in cabins, houseboats and caravans and just generally being wanderlost. Seriously, Google Images of Hilary T. Smith and there are photos of her in said off-the-grid cabin with copies of ‘Wild Awake’ strewn all over the place. It’s pretty cool. And, apparently, she had a fairly devout following as the INTERN and people went bonkers-batshit when it was announced her YA novel was being published. And here we are, with ‘Wild Awake’. I may not be cool enough to have been up on the anonymous goings-on of the INTERN, but now that I’m acquainted with Hilary T. Smith I’ve got to say there’s something about this lady and her words … I may be a little wee bit obsessed.

The blurb for ‘Wild Awake’ gives very little away, and that’s probably a good thing. The book should be read in much the same way Kiri Byrd takes midnight bike rides – with that plummeting-stomach feel as you pick up speed going downhill and can barely see what’s right in front of you. The book begins benignly enough, with a set up like something out of a John Hughes film. Piano prodigy is left home-alone while parentals take a cruise … she’s meant to be practicing for her upcoming piano recital, but is also working on a Battle of the Bands set with her friend/mega-crush – coming-of-age/snogging/hilarity will no doubt ensue. Except it does and it doesn’t. Something gets caught in the spoke of Kiri’s wheel when she receives a mysterious phone call from someone who knew her dead older sister, Sukey. Someone claiming to have a bag full of Sukey’s possessions, and does someone from the Byrd family maybe want to come and collect?

With this phone call, Kiri is transported to Sukey’s death four years ago and old wounds are reopened with the bag of Sukey’s old things.

I buckle on the silver shoes and take an exploratory stroll around the room. They fit, which surprises me, and I stand there, teetering, feeling my legs lengthen like a stretched piece of gum.

When Kiri travels to the bad part of town and learns the truth of Sukey’s death, a slow spiral into long-awaited grief is triggered. Kiri starts acting erratically; causing her friend Lukas great concern and irritation, and making his mother (a social worker) think that Kiri is experiencing some sort of mania.

But in the midst of her grief and mounting mania, Kiri meets Skunk: a Hagrid-esque boy of eighteen who offers to fix her punctured bike wheel one night and who she keeps conjuring in moments of crisis. Skunk is a sweet if shy boy, who owns an apple-green guitar he wants to sell and who Kiri discovers takes Midnight Mass bike rides and is in training to be a bike mechanic.
There’s grief for her sister, panic over the piano recital, burning embarrassment after an incident with Lukas and Kiri spins and spins but holds onto the only calming thing in her new life, Skunk – who she nicknames her ‘love-bison’, sometimes ‘bicycle boy’.

Hilary T. Smith astounds me. Reading ‘Wild Awake’ is much like sitting down to a feast, when words and sentences on the page practically beg to be licked. Example;

The evening air smells like a pair of old jeans baking on a clothesline, and the sky is the colour of a squeezed peach.

After reading I did think that parts of the book were slightly conveniently contrived – the biggest being Kiri’s straight-lace-strict parents leaving her home alone to go on a cruise. But, y’know what? I don’t care. While I was in this book, I was right there riding alongside Kiri in the dead of night, gobbling up Smith’s stellar words and I didn’t care a lick about the loose plot so much as these characters and those scrumptious words.

This is a book about grief that, if anything, reassures readers that there’s no proper timeline or protocol for sadness and missing someone. Sukey died four years ago, but over the course of the book Kiri re-examines the hurt she felt as a 12-year-old who just lost her sister, as well as how she feels as a 16-year-old with a vastly altered view of Sukey and the events surrounding her death.

This is also a book about mental illness, but not as it’s normally explored. Hilary T. Smith doesn’t write an antiseptic, clinical story or paint-by-numbers characters with mental illness. Hers feels much more radical and honest – aided by the fact that adult characters are sparse and not around to be saving grace. I loved that mental illness isn’t necessarily written as something to be conquered or examined to death in this book, rather we read Kiri’s slide into mania and another character battle what he knows to be true with what his instincts tell him. I have read reviews by “concerned adults” on Amazon that the mental illness is not properly addressed in this book, but that’s bollocks. In reality, there is no neatly tied-with-a-bow conclusion or realization to write for mental illness, and I much prefer Hilary T. Smith’s handling of the subject to a lot of other YA authors I’ve read.

Hilary T. Smith also writes an unconventional romance. I admit, after the first chapter with Kiri and Lukas I was preparing the eye-rolls about this ‘golden god’ friend of hers who Kiri lusts after. So, tickle me surprised when Smith writes a far sweeter and appealing love interest in the love-bison;

It’s amazing how well you can get to know a person if you actually pay attention. People are like cities: We all have alleys and gardens and secret rooftops and places where daisies sprout between the sidewalk cracks, but most of the time all we let each other see is a postcard glimpse of a floodlit statue or a skyline. Love lets you find those hidden places in another person, even the ones they didn’t know were there, even the ones they wouldn’t have thought to call beautiful themselves.

So, trying to write this review was really, really hard. All I really wanted to do was groan appreciatively – URGGHHGHGHG – and then thump the book against my chest like some sort of Neanderthal because THERE ARE NO WORDS (ignore previous words). I loved ‘Wild Awake’, and I did fall into obsession with it. I love this author and her words and I just want more from her. 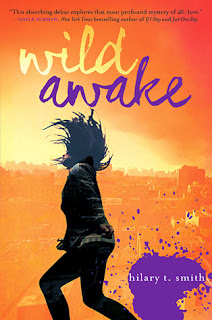 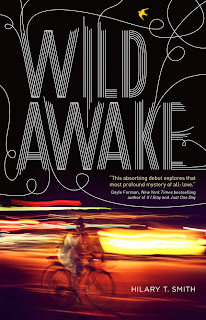 Email ThisBlogThis!Share to TwitterShare to FacebookShare to Pinterest
Labels: Hilary T. Smith, YA