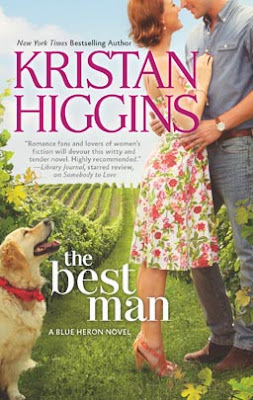 
Sometimes the best man is the one you least expect…

Faith Holland left her hometown after being jilted at the altar. Now a little older and wiser, she's ready to return to the Blue Heron Winery, her family's vineyard, to confront the ghosts of her past, and maybe enjoy a glass of red. After all, there's some great scenery there….

Like Levi Cooper, the local police chief—and best friend of her former fiancé. There's a lot about Levi that Faith never noticed, and it's not just those deep green eyes. The only catch is she's having a hard time forgetting that he helped ruin her wedding all those years ago. If she can find a minute amidst all her family drama to stop and smell the rosé, she just might find a reason to stay at Blue Heron, and finish that walk down the aisle.

Faith Holland comes from the beautiful wine country of Manningsport, California. Her family own the famous Blue Heron Winery, and two great big farm houses where their great-greats all grew up too. But Faith moved to San Francisco three years ago, after a left-at-the-altar, broken-hearted incident and now she rarely ever goes home. But when her older sister, Honor, tells her to come home and help their father before he marries a gold-digging harlot, Faith is on the next flight home and intending to stay for an unspecified time.

Despite reservations at bumping into her old fiancée Jeremy – high school sweetheart and the man who broke her heart (and seemingly ruined her for all other men, since he’s still the last one she’s ever been with) – Faith is drawn home by her own guilt. When she was just a little girl she was in the car with her mother when a speeding motorist slammed into them, killing her. Faith feels a great deal of guilt because she told everyone she was having an epileptic fit which distracted her mother, and Faith has been trying to make amends ever since.

Once home, Faith is tip-toeing around Jeremy, putting up with everyone’s sympathetic eyes and trying to pry the claws off dad’s unintentional girlfriend . . .  but the real thorn in her side turns out to be one Levi Cooper. Once town bad boy, Jeremy’s best friend and the “best man” who decided her wedding ceremony was the perfect time for Jeremy to come out of the closet. Levi went and joined the army fresh out of high school, but now he’s home in Manningsport and police chief – caring for his teenage sister after their mother died, and still seems to have a deep hatred for Faith – who he snidely nicknamed Princess Super-Cute in high school. Never mind that Faith and Levi have another side to their past that both of them are reluctant to delve into . . . even when sparks begin to fly again.

‘The Best Man’ is the first book in the new contemporary romance ‘Blue Heron’ series from Kristan Higgins.

Insane, I know, but I'd never read a Kristan Higgins book until ‘The Best Man’. Of course, I'd seen her on many a bookshelf and recommended-reading list . . . but her covers always seemed too cutesy to me, suggesting her romance stories might be all sugar, no spice. But after reading everyone rave about her new ‘Blue Heron’ series, I decided to put my assumptions aside . . . and now I’m eating my words.

Faith Holland is a hopeless underdog if ever there was one. She’s had a three-year drought since being left at the altar by her closeted fiancée, who she’d loved since high school and already had baby-naming plans with. Since Jeremy, Faith has had a succession of dating disasters – and when we first meet her, she’s right smack in the middle of another one. Though hilarious, it’s also quickly apparent that Faith is desperately lonely and still scarred by her failed relationship (which, really, had been doomed from the beginning – so Faith has never actually had a proper relationship in her whole life).

Upon returning to Manningsport to help out her family (save her dad, and also redesign the old barn into an ideal wedding and special occasions venue) Faith is forced to re-open old wounds. Everyone in this little town still has deep sympathy for the girl who was left behind. Never mind that Jeremy is the local doctor and universally beloved by all, that just makes everyone pity Faith all the more.

“But if someone calls me ‘poor thing’ one more time, I may go postal and kill everyone around me. Except children and dogs. And old people. And you. And Connor. Fine, I won't kill anyone. But it's driving me crazy.”


The one person who isn’t buying into the whole “woe is Faith” thing is Levi Cooper – Jeremy’s best friend, dreadful best man and perhaps the one person in Manningsport who never bought into Faith’s goody-two-shoes act. As such, Faith feels Levi’s contempt for her radiating off him every time they bump into each other (like when her dog, Blue, winds up under a neighbours’ house or Faith is found dangling from a bathroom window – long story).

‘The Best Man’ has quite a lot of stories and histories to set up in order to fully understand (and sympathise) with certain characters. In the beginning we get Faith’s perspective on her high school romance with Jeremy, and the fateful day it all fell apart. From Levi we get the beginnings of his high school friendship with Jeremy and events leading up to the wedding that would have never worked. And from both Faith and Levi we get a little extra history about a brief moment in high school when the two of them entertained the thought that maybe they had a little chemistry themselves. . .  all of these interwoven with Faith’s return to Manningsport and those same sparks flying again between her and Levi.

Higgins beautifully sets up this little Manningsport town and all the old histories and personal ties within the community. I actually really liked the backwards-and-forwards narration, even when reflections of the past seemed to keep repeatedly hitting Faith like an anvil. I was very wrong to assume that because Higgins has a tendency to feature cute and fuzzy animals on her covers, that her stories would be sickeningly sweet and easy – far from it! Both Faith and Levi have a lot to overcome within themselves and their histories to be together, and Higgins has indeed (though not unbelievably) piled on the dilemmas, for Faith especially.

But I loved Faith, maybe all the more for her hard lot in life. She’s still a laugh-out-loud riot and quick wit. Though Levi’s memories of teenage Faith are of a sugar-coated suck-up, in reality Faith has a thorny side that she doesn’t mind subjecting Levi to – and that just made me love her all the more.

I really liked that Faith and Levi had an antagonistic history that seemed built on false assumptions and damning secrets. It meant they were far from a ‘love at first sight’ cliché, and much closer to a ‘Pride and Prejudice’ slow-burn.

This was such a fun, easy read that alternately had me laughing-out-loud and lip-quivering in some parts (and, okay, swooning in others) I can’t wait to read the next ‘Blue Heron’ instalment. 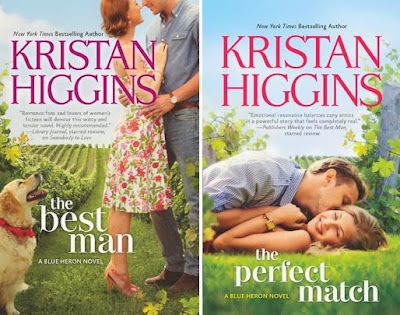