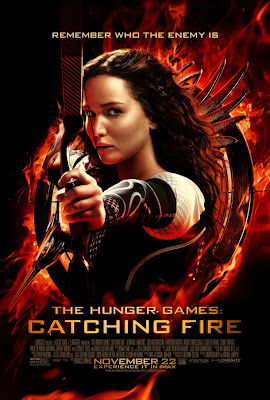 Every revolution begins with a spark.

I had the great pleasure last night, of (finally!) seeing ‘Hunger Games: Catching Fire’ at IMAX Cinema. It was, of course, spectacular – and not just because between movie #1 and #2 Jennifer Lawrence (Katniss) has become an Oscar-winning, GIF-giving megastar of epic proportions … it was a wonderful film in its own right, and in keeping with the faithful adaptation of first book by director Gary Ross, ‘Catching Fire’ director Francis Lawrence has likewise delivered an extraordinary retelling of the second instalment in everyone’s favourite YA Dystopian series.

Remember who the enemy is.

Much like Suzanne Collins’ book, the first half of ‘Catching Fire’ focuses on Katniss and Peeta’s (Josh Hutcherson) lives in District 12 after their unprecedented double-“victory” in the 74th Hunger Games.

Katniss and Peeta are living in the Victor’s Village and suffering survivor’s guilt and post-traumatic stress disorder. They’re also not the happily-ever-after romance story the world thinks they are, and it’s apparent that shortly after returning home, Peeta figured out Katniss’s true feelings for him; not ambivalence, but not the love story he thought they were either. Katniss’s best friend and hunting partner, Gale (Liam Hemsworth) isn’t quite as convinced as Peeta that their Hunger Games romance was entirely fake, but he lets Katniss know where he’d like to stand in her life regardless.

When the film begins Katniss and Peeta are about to go on another whirlwind Victor’s tour of the Districts, culminating in a splashy Capitol party before the 75th Hunger Games are reaped.  This beginning of the film not only sets up Katniss’s post-Hunger Games life, but focuses on the over-arcing villains that carry the series to its conclusion. In the first film, scenes with President Snow were added to make it clear he was the bad guy – but in the book, Katniss and readers get their first real taste of him in ‘Catching Fire’. But what’s lost from Snow’s surprise visit, Donald Sutherland makes up with dripping menace and calculated threats in this second film. 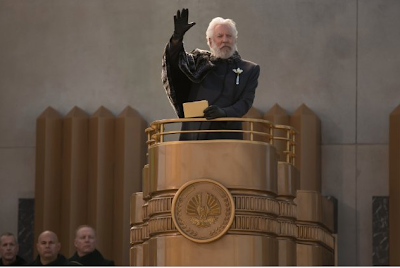 The first-half of the movie also introduces us to the circumstances of the Districts. Previously confined to Katniss and Peeta’s 12, the Victor’s tour allows audiences to see that grey-tinged poverty and downtrodden citizens are not unique to Katniss’s home town, but all of Panem (barring The Capitol). This tour also hints at the sheer overwhelming depravity of Snow and the concept behind The Hunger Games. Forced to give speeches set out on cards, Katniss and Peeta address citizens, as the families of deceased contestants from said District stand on raised platforms. This is especially traumatic when they arrive in District 11, and Katniss is forced to look upon the faces of Rue’s family – it’s a heartbreaking scene that quickly delves into high-octane horror, in a perfect encapsulation of the entire Victor’s Tour.

While on tour Katniss and Peeta come face-to-face with the fallout of their Hunger Games win. There is disquiet and discontent in the Districts, and people are starting to fight back –it’s clear from the spray-painted Mockingjay symbol that abound, and the three-fingered District silent salute that is constantly raised … President Snow realises something must be done to quash Katniss’s unintentional rebellion.

Upon recommendation of new Game Maker, Plutarch Heavensbee (Phillip Seymour Hoffman – already so well-suited to the Capitol that the costume department decided to give him a sash and little else to define his character… so he’s pretty much just Phillip Seymour Hoffman, plus sash) President Snow decided that to celebrate the 75th Quarter Quell Hunger Games … all previous winners will be reaped. Which means, Katniss and Peeta are back in the arena.

The sun persists in rising, so I make myself stand.

When the film shifts back into preparation mode for Katniss and Peeta in this, the Quarter Quell, it’s a weird combination of fun and doom. On the one hand, this is a “best of” past Hunger Games contestants, and as those who’ve read the book know, ‘Catching Fire’ provides a wealth of interesting new secondary characters. There’s fan-favourite Finnick Odair (Sam Claflin – with a smile to rival Heath Ledger’s) and slyly outspoken Johanna Mason (Jena Malone – all ferocity and humour). All the contestants are PISSED. OFF at having to compete for their lives again, and they’re holding nothing back on stage with Caesar Flickerman (Stanley Tucci). On the one hand it is quite fun – Katniss is back and determined, if not to see herself survive, then to at least see Peeta through to the end. She’s in warrior-woman mode, and while it’s fun for the audience (more so than in ‘The Hunger Games’ when all contestants were children) … there’s no mistaking how horrendous it is to ask these (many of them damaged) survivors to re-enter the cause of their nightmares. 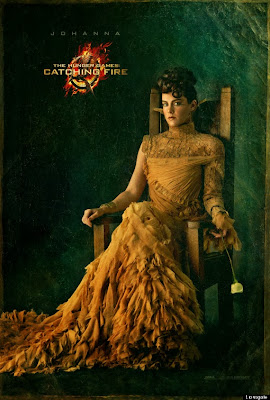 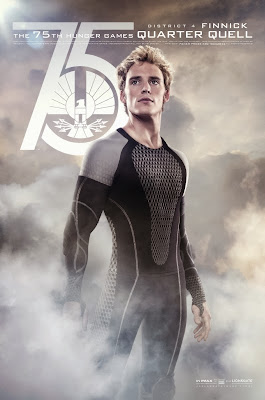 The Arena is great. My mind was a little fuzzy on book details, but director Francis Lawrence never lets up once contestants enter the jungle arena. I jumped out of my skin so many times (the monkeys! THE MONKEYS!), but Francis Lawrence also does well to tease out these characters in-between the edge-of-your-seat escapes from poisoned fog and electrifying accidents.

Remember, girl on fire, I'm still betting on you.

Something that really came through in the movie for me – and it’s down to a great script, Jennifer Lawrence’s goddam beautiful portrayal and, I think, the fact that Francis Lawrence is at the helm for the two-part finale of ‘Mockingjay’ – is Katniss’s overall story-arc in this series. She goes from being an unwilling puppet in The Hunger Games for Capitol and President Snow’s amusement, to a sort of unwilling figurehead in the upcoming Revolution. That really hit home for me in this movie, even more so than it did in the books … to the point that I think the ending of ‘Mockingjay’ will make a lot more sense and not seem like such a cop-out to people. 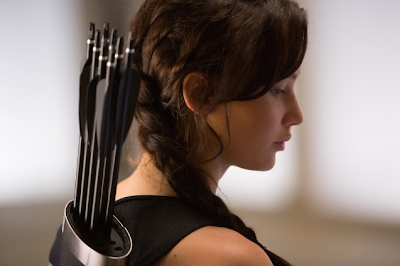 And I think because of that I also, somehow, find myself firmly on Team Peeta. I don’t know what it was specifically (Hutcherson’s suddenly chiselled jaw, cute cowlick or the fact that I started to see Peeta as the only other person in the world to truly understand Katniss) but suddenly not even the steely-gaze of a Hemsworth could deter me from my Team Peeta banner waving.

I really, thoroughly enjoyed ‘Hunger Games: Catching Fire’. I know a lot was left out (mostly to do with getting-to-know the fellow Quarter Quell tributes) but Francis Lawrence did well to raise the energy and high-stakes in this second film, in a very honest adaptation of Suzanne Collins’s book. Jennifer Lawrence was, as always, perfection; a great combination of suffering survivor, loving sister and determined warrior. Josh Hutcherson seems to have suddenly found his leading-man shoes and even Sam Claflin (who initially underwhelmed me in advance photos, and broke my heart when he announced, almost proudly, that he “doesn’t read”) had me on-board.