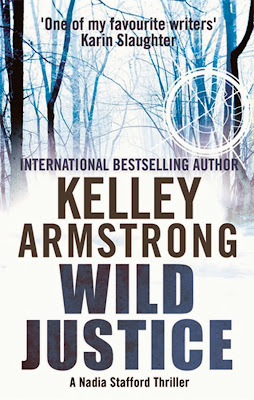 
Wild Justice: the dramatic finale to the Nadia Stafford trilogy.


Ex-cop Nadia Stafford has a dark secret. After taking the law into her own hands she was kicked off the force. . . and entered the shadowy world of guns for hire. She has her own strict code - works only for one crime family, only kills the really bad guys. But when a hit goes tragically wrong, Nadia is devastated. Is it time to leave the business for good?

Before she has time to decide, Nadia discovers that her own life is under threat. And worse - that terrifying events from her past may have triggered the attacks. With the help of Jack, her enigmatic mentor, Nadia is forced to upon a dark path - towards the truth and towards her final destiny.

Nadia ‘Dee’ Stafford is a hitman. After a disastrous career move as a cop, that saw her shoot an unarmed criminal and get kicked off the force, Nadia took herself into the wilds of Canada where she bought a lodge and started a B&B. But to keep her new life afloat she started taking jobs as a gun for hire. Early in her side-career she was taken under the wing of veteran hitman, ‘Jack’, and the two of them have been through a few near-misses and gruelling assignments together.

But never far from Nadia’s mind is the truth of why she became a cop in the first place, and maybe why killing comes so naturally to her . . .  when she was just 13-years-old, Nadia and her cousin Amy were kidnapped. Nadia got away, Amy didn’t. After a botched trial, her murderer walked free.

Drew Aldrich and the memory of Amy’s death have haunted Nadia ever since, but when Aldrich resurfaces (under a new alias) finding him sets off a chain-reaction in the murky underworld of hired assassins and puts Nadia in grave danger.

The first book in this series was ‘Exit Strategy’, released back in 2007. Armstrong introduced readers to disgraced but gutsy Nadia Stafford; gun for hire and ex-cop whose name and reputation had been dragged through the mud after she shot an unarmed criminal. That was a few years ago, and when we first meet Nadia she’s a lodge-owner moonlighting as a hitman. In that first book, Nadia joined forces with her older hitman mentor, Jack, to hunt down a serial killer by using herself as bait. Teaming up with Nadia and Jack were his own mentor, Evelyn, and US Marshall with a vigilante gig on the side, Quinn.

The second book came out in 2009, ‘Made to be Broken’ teamed the foursome up again, this time to look for a vanished teenage girl and her baby. The second book teased out the relationships which were hinted at in ‘Exit Strategy’ – mainly a flirtation between Nadia and Quinn, a deep dislike between the two men and the realization that Nadia would like something more with her mentor, Jack . . .

And then came the long, long, long wait for the final book. For a while it seemed that Kelley Armstrong was either too busy with ‘Women of the Otherworld’ and its spin-offs to ever feasibly write Nadia’s conclusion, or none was ever planned. This, despite ‘Made to be Broken’ having ended on an emotional cliffhanger that left fans reeling.

Well, it’s been four long years but finally we have ‘Wild Justice’ – the third and final book in Nadia Stafford’s story that addresses a traumatic and defining event from her childhood, and provides fans with some satisfying closure in our favourite hitman’s private life.

When the book begins Nadia is reeling after an assignment goes horribly wrong. Coming to pull her out of a guilt-spiral, Jack arrives with more than just words of wisdom to comfort his young protégé . . . he has something more, better – Jack’s located the man who murdered Nadia’s cousin, and got away with murder.


I stiffened, “I know it’s going to bring back memories, Jack.”

He said nothing more until he turned off into the city. “I’m not a shrink. Never been to one. Shot a couple. Don’t think that counts. Point is, I don’t know how this works. Memories and shit. Better off confronted? Or buried?”


But finding Drew Aldrich sets off a chain-reaction in the criminal underworld, and Nadia finds herself needing protection and help from Jack, Evelyn and Quinn once again.

This book snuck up on me, I've got to admit. I'd wanted it for so long that when it finally arrived, I was totally blindsided because I'd long ago convinced myself the day would never come and Nadia’s story would forever be open-ended. But from the very first page it was easy to slip back into this story alongside Nadia Stafford – once again picking up the thread of her traumatised childhood and searing vengeance that so determined her initial career as a cop, and then her decision to keep on killing as a hitman.

Something that really shone for me in this book (and was a big reason I fell in love with the series to begin with) was how many tropes Armstrong avoids. Much like loyal and strong Elena in ‘Women of the Otherworld’, Nadia Stafford is not your typical heroine – and she’s definitely not like the female assassins of Hollywood. Forget Angelina Jolie, stiletto chases and cocktail murders – Nadia Stafford has girl-next-door looks and a down-to-earth disposition. She’s self-determined and clever, lets very few people get close to her and prefers her quiet life in the Canadian wilds. She’s a great dichotomy of perfectly ordinary woman leading a quietly extraordinary and deadly double-life.

I was so grateful that Armstrong addresses Nadia’s love life in this book, and gives readers a most satisfying conclusion. I won’t give anything away, but Armstrong beautifully balances the heat and built-up tension with the furiously paced whodunit.

And the mystery at the heart of ‘Wild Justice’ is a doozey. Armstrong planted this way back in ‘Exit Strategy’ – setting up Nadia’s childhood trauma and survivor’s guilt over her cousin’s death. That long arc story really pays off in this book, as it’s intricately linked to Nadia’s personal barriers and killer instinct.

‘Wild Justice’ may have been a long four years in coming, but it was well worth the wait. Here is a fine farewell for everyone’s favourite hitman, Nadia Stafford, in a conclusion that has far-reaches to the beginning of the series and roots in our heroines’ psyche. And brilliantly plotted and satisfying farewell to one of my favourite thriller series. 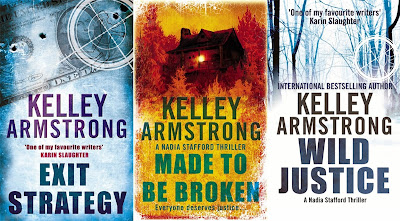