‘The Infinite Moment of Us’ by Lauren Myracle 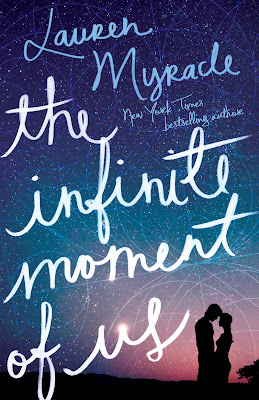 For as long as she can remember, Wren Gray’s goal has been to please her parents. But as high school graduation nears, so does an uncomfortable realization: Pleasing her parents once overlapped with pleasing herself, but now . . . not so much. Wren needs to honor her own desires, but how can she if she doesn’t even know what they are?

Charlie Parker, on the other hand, is painfully aware of his heart’s desire. A gentle boy with a troubled past, Charlie has loved Wren since the day he first saw her. But a girl like Wren would never fall for a guy like Charlie—at least not the sort of guy Charlie believes himself to be.

And yet certain things are written in the stars. And in the summer after high school, Wren and Charlie’s souls will collide. But souls are complicated, as are the bodies that house them . . .

It’s the final day of high school, and Wren Gray is terrified of the future. Rather than follow her parent’s plan for her to attend Emory and start on the path to becoming a doctor, Wren has deferred for a year of travel instead. Not just travel, but work with Project Unity in Guatemala teaching children English and helping build infrastructures. Choosing not to attend Emory is the first act of defiance in Wren’s life, and she knows her parents are going to be disappointed, possibly right up until she leaves in three months time.

Charlie Parker is going to Georgia Tech, on a scholarship. He’s had a hard life; from the abuse he suffered as a child, to being bounced around foster houses. Then he went to live with Chris and Pamela, and he found home – with the arrival of his wheelchair-bound little brother, Dev, Charlie’s life has never been so good. But before school is over and they never see each other again, he’s given a moment in time with the beautiful Wren Gray – who he has loved from afar for years. One tentative wave changes everything for Wren and Charlie when their lives collide . . .

‘The Infinite Moment of Us’ is the new novel from Lauren Myracle.

This is the first Myracle novel I've read, but I was about 50 pages in before I started wondering why this was such a departure for the author of controversial books. You see, even though I hadn’t read a Lauren Myracle novel before ‘The Infinite Moment of Us’, I knew of her as a resounding voice of difference in YA. I know that she wrote about small-town homophobia in 2011 novel ‘Shine’ (which is in my ‘Been Meaning to Read. . . ’ pile!) and a contemporary YA lesbian romance in 2007’s ‘Kissing Kate’. I remembered a recent New York Times article titled ‘Childhood, Uncensored’ which discussed her ‘Internet Girls’ series topping the list of challenged and banned books nationwide. So even though I hadn’t read her previously, I knew enough about Myracle to wonder why ‘The Infinite Moment of Us’ was so seemingly tame.

It’s a romance – between a guy with a rough past, and a girl who’s only just started to come out of her shell. They have three months before she leaves for Guatemala, but the boy has pined for the girl from the moment he saw her years ago, and their falling in love is a small miracle for both of them. With each other, they both feel at ‘home’ and they understand one another like no one else;

She swallowed. “Does that make any sense?”

He pulled his eyebrows together endearingly, like a little boy trying to act grown up. “You’re saying the mysteries are worth examining, even if they’re too big to be understood. That maybe they’re bound to be too big to understand, but that doesn’t take anything away from them, and in fact just adds to their beauty. Is that close?”

“That’s it exactly,” she said. He put it into words so beautifully: Marvel and wonder all you want. There will always be more. She laughed, and the surprised smile she got from Charlie was a pure gift.


It sounds fairly generic. White boy from the ‘wrong side of the tracks’ meets white girl from cookie-cutter family and fall into heterosexual love. For any other author, ‘The Infinite Moment of Us’ would seem pretty normal, for Lauren Myracle it reads like a real departure from her grittier, more controversial novels. 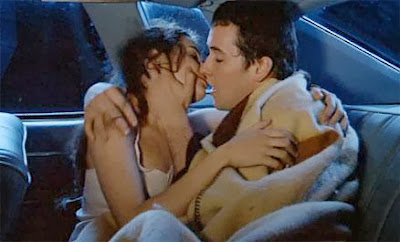 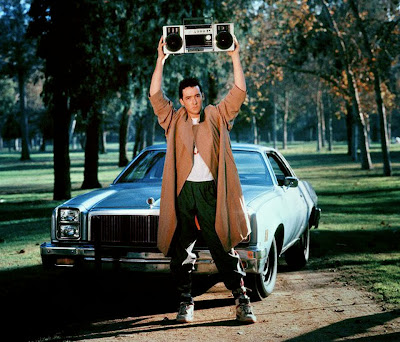 Kirkus review likened the book to Judy Blume’s ‘Forever’, but with more emotional depth between the couple. I'd agree, to some extent. But for me this book was just like 1989 film (and one of my favourites!) ‘Say Anything. . . ’. Right down to the conversation Charlie has with his best friend, Ammon, about wanting to ask Wren Gray out;


“Whatever. You know what I’m saying.”

“That Wren’s out of my league?”

“No. No way. I’m saying she’s out of everyone’s league, because she’s not in a league. She’s, like, in a league of her own.”


Which reminded me of Lloyd Dobler being warned by his two best female friends about aiming for a date with Diane Court;


Corey Flood: Diane Court doesn't go out with guys like you. She's a brain.
D.C.: Trapped in the body of a game-show hostess.


Other parts also reminded me of the film, but I'd hate to spoil.

And ‘The Infinite Moment of Us’ is just as heart-swellingly, beautifully romantic as ‘Say Anything. . . ’. Charlie Parker has the same sigh-inducing appeal as Lloyd Dobler, and Wren Gray is that same breed of beautifully complicated, sometimes frustrating female as Diane Court.

But as I got through the novel, I started to think that Myracle had taken a bit of a controversial stand in writing such a ‘straight’ romance. Guy and girl get together, fall in love, overcome some obstacles, remain in love . . . it sounds overly simple and candy-coated, but it’s actually quite rare these days to read a YA novel in which such a healthy romance is portrayed. Yes, Charlie and Wren have issues both internal and external – she’s overcoming the fear of disappointing her parents, he’s balancing the loyalty he feels to his adoptive family against his need to be with Wren as much as possible. Charlie also has a derailed ex-girlfriend called Starrla, who he lost his virginity to but whose own personal demons stopped her from ever getting close or serious about Charlie – but that doesn’t mean she likes seeing him happy with Wren.

In the novel, Myracle touches on the biggest coming-of-age there is; falling in love for the first time. She writes about losing your virginity (and it being okay to wait for love, even when you’re pushing 18). There’s a sexting incident, but it’s not blown up into a Danger! Danger! Danger! moral lesson – it’s an expression of love between two people who are experimenting. There are also some wise-words between friends, as the difficult emotional path of love is navigated amidst family and life commitments;


“I didn’t say it was dumb,” Tessa said. “It’s what you feel, and guess what? Feelings are like three-year-olds. They’re not rational. They’re just there.”


I recently read a great blog over at The Midnight Garden titled ‘Fiona Wood on Girls, Sex and Wildlife’. I agree with absolutely everything discussed in that post, about the prevalence of “carefully flawed” teenage characters and the lack of realistic sex scenes in YA. By contrast, ‘The Infinite Moment of Us’ has some of those “carefully flawed” teen characters, and the sex scenes are lightly erotic without being vulgar (or ever really crossing over in ‘New Adult’ territory) – I don’t know how relatable Charlie and Wren’s romance is for all their simpatico and idyllic first-time sexual encounters. It's actually interesting to note that while the book has been hailed by critics (making the Publishers Weekly best books of 2013 list) it seems to have divided teen readers. A glance on Goodreads shows a slew of 2 and 3-star ratings. Actually, quite a few teen readers are complaining that the book skims over meatier issues like foster care, child abuse, parental pressure etc. One reviewer even complained about the "endless lovey-dovey cheesy dialogue." Huh. Ok. Maybe it's a case of adults really loving this book for its portrayal of a more idyllic teen romance. Pretty interesting though that teen readers wish it had more (realistic?) tough-stuff and not so much of the gooey romance.

I, personally, felt like Myracle was writing more of a wish for teenagers – that they could be a bit more like Wren and Charlie. To take things slow, wait for it to feel right and start learning to listen to your feelings and express them to those you love. Maybe it’s a bit twee, but I really responded to the quiet loveliness of the book where Myracle shines a light on a fairly simple first-time romance and the two very deserving, grounded young adults it happens to.

Email ThisBlogThis!Share to TwitterShare to FacebookShare to Pinterest
Labels: Lauren Myracle, YA