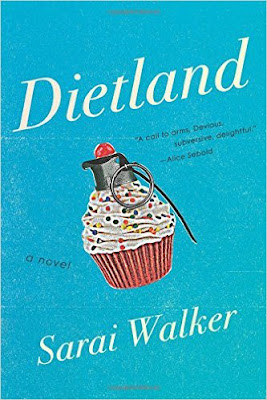 The diet revolution is here. And it’s armed.

Plum Kettle does her best not to be noticed, because when you’re fat, to be noticed is to be judged. Or mocked. Or worse. She works answering fan mail for a popular teen magazine, and is biding her time until her weight-loss surgery. Only then can her “true life” as a thin person finally begin.

But when Plum notices she’s being followed by a mysterious woman in colorful tights and combat boots, she finds herself falling down a rabbit hole into the world of Calliope House, a community of women who live life on their own terms. Reluctant but intrigued, Plum agrees to a series of challenges that force her to deal with the real costs of becoming “beautiful.” At the same time, a dangerous guerrilla group begins to terrorize a world that mistreats women, and as Plum grapples with her personal struggles, she becomes entangled in a sinister plot. The consequences are explosive.

Part coming-of-age story, part revenge fantasy, Dietland is a bold, original, and funny debut novel that takes on the beauty industry, gender inequality, and our weight-loss obsession from the inside out — and with fists flying.

‘Dietland’ is the debut novel by American author Sarai Walker.

I had never heard of ‘Dietland’ before Sarai Walker was announced in the author line-up for this year’s Melbourne Writers Festival (MWF). And then as the Festival dates drew closer – the whispers started … a little bit of chatter over Twitter, people tittering in bookshops, that bold grenade-cupcake cover suddenly appearing in my Instagram feed. That word-of-mouth buzzing about a book was starting to spread, and I couldn’t ignore it. Especially not when book-recommending aficionado Kate Cuthbert raved, and MWF Festival Director, Lisa Dempster, likewise added her adoration.

And here’s yet another reason why I love Writer’s Festivals – they introduce you to authors you may never otherwise discovered, were it not for the overwhelming enthusiasm and celebration of their ideas and language. And it seems Australia is particularly enamoured with Walker’s ideas outlined in this fictional novel, as she also spoke at Sydney’s ‘Festival of Dangerous Ideas’ (FODI), in a talk called “Radical Fat Acceptance: is it time to accept that fat is fine?”

Because that’s essentially the idea being discussed in ‘Dietland’ – a book that Alice Sebold calls “devious, subversive, delightful.” It’s all about Alicia ‘Plum’ Kettle, who goes by her nickname for its plum/plump connotations … Alicia is the name she’ll wear when she is thin, because she will be soon – after a dangerous surgery will shrink her stomach down to the size of a walnut and leave her in a perpetual state of hunger. Plum has not been made to hate her body – her mother (albeit, a thin woman) – has always loved and supported Plum, and particularly loves that she resembles the earlier generations of Kettle women. No, society has made Plum hate herself. The billboards of thin, happy women and the men who abuse her in the street, the college boy who broke her heart and the ‘Baptist Plan’ weight-loss company who savaged her esteem as a teen.

But when we meet Plum, change is in the air. The intriguing opening line of the novel goes;

It was late in the Spring when I noticed that a girl was following me, nearly the end of May, a month that means perhaps or might be.

From there Plum is gifted a copy of the book ‘Dietland’ which dismantles the weight-loss industry and our fat-shaming society. She is welcomed into a feminist collective living out of a New York house called Calliope … and she meets a vigilante cosmetician working in the bunker of the same teen magazine where Plum herself works, imitating the Editor’s voice in email correspondence with troubled young female readers.

But at the same time as Plum’s life is turning around, a world-wide terrorist network working under the name ‘Jennifer’ is delivering vigilante feminism to the corporations and individuals who deserve it. Rapists are being thrown from airplanes, a British tabloid newspaper is being forced to feature more male anatomy and a hit list ‘dick list’ is circulating of who’s next …

‘Dietland’ is a smart, funny thriller that will make you mad. Your blood will boil and your heart will race, as much from the disarming and inventive plot as the subversive truth behind it.

When the cocks started appearing on page three, there were immediate protests from media watchdog groups, from parents and government ministers, who claimed the photos were indecent. Many newsagents began to keep the Daily Sun behind the counter, lest anyone be offended. Some of them refused to sell it at all or even touch it. The circulation dropped by half during the first week. In media surveys, men said they were too embarrassed to read the paper. “I’m not gay,” said a man who was interviewed. The CEO knew cocks were bad for business. Breasts she could get away with. Women knew their place, but with men it wasn’t as simple.

Walker says she got the spark of an idea for ‘Dietland’ after watching the film ‘Fight Club’, and wishing there was a similar story in which women can get just as mad.  Reading ‘Dietland’ you can still see the ‘Fight Club’ connections, but it must be said that there’s more depth and breadth to what these women are railing against, than Palahniuk’s anti-consumerist ideas. Everything is covered from rape culture to slut shaming, the porn industry and Hollywood ideals of beauty. All filtered through Plum’s extraordinary transformation and coming-of-age from a woman who buys into the weight-loss industry’s wish to “make women smaller” and “take up less space” to someone who sees the world for what it really, patriarchally is.

This book does read like a thriller – as running alongside Plum’s first-person narrative are snatches of vignettes detailing the vigilante feminism of the mysterious collective ‘Jennifer’. This plays out on a worldwide stage, and eventually filters back down to Plum’s life in New York City in a twisting, turning story that will leave you guessing.

‘Dietland’ is fabulous. I kept shaking this book in my hand as I read it, as though to emphasise the “YES! YES! YES!” of my inner-thoughts as certain ideas were thrown up on the page; sometimes articulating what I’ve always known, while other times reminding me why I should still be angry. I want this to be made into a film! Please? I can already picture Cara Delevingne as the quirky and mysterious white-rabbit character of Leeta, who first leads Plum down the Dietland rabbit-hole (which may be a weird choice – but Cara speaks very openly now about the destructive modelling industry she was once apart of, and those eyes of hers are very Che Guevara-distinctive!).

Really – I just want to hand this book to all the women I love and tell them to read it and see for themselves … it’s remarkable and radical, and one book I think I’ll keep coming back to for years to come. 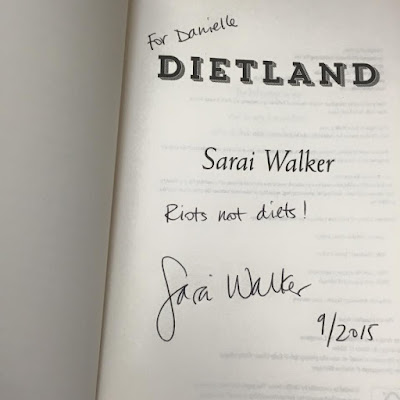 Another reason I love Writers Festivals? Getting to meet authors and thank them for writing bloody great books!