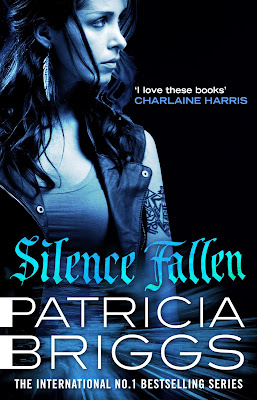 Attacked and abducted in her home territory, Mercy finds herself in the clutches of the most powerful vampire in the world, taken as a weapon to use against alpha werewolf Adam and the ruler of the Tri-Cities vampires. In coyote form, Mercy escapes only to find herself without money, without clothing, and alone in the heart of Europe...

Unable to contact Adam and the rest of the pack, Mercy has allies to find and enemies to fight, and she needs to figure out which is which. Ancient powers stir, and Mercy must be her agile best to avoid causing a war between vampires and werewolves, and between werewolves and werewolves. And in the heart of the ancient city of Prague, old ghosts rise...

‘Silence Fallen’ is the tenth book in Patricia Briggs’s ‘Mercy Thompson’ urban fantasy series, and it follows directly on from ‘Fire Touched’.

Right. So. Remember in my ‘Fire Touched’ review when I said that book felt like it was closing the door on further storylines on the Fae and Graylords, and Briggs would gift reader a rejuvenated story-arc to follow and a new trajectory for Mercy & Co.? Yep. I was wrong – or at least, ‘Silence Fallen’ is not the book to kick that rejuvenation off … rather it reads like the book before that book. Which is a nice way of saying; “filler.”

I’m sorry, I hate not liking a Mercy Thompson book – but this tenth instalment feels like a firm 2/5 me, which is a decided disappointment. And I don’t think it being a filler-book will actually be a huge surprise to many people, because it’s right there in the blurb … that this is a book in which Mercy is kidnapped, separated from Adam and the pack who are then working to get her back. So, 98% of the book has Adam and Mercy separated – and anyone who has persevered with a long-running series (from Stephanie Plum to Night Huntress and Vampire Academy) will know that a storyline like this which manufactures a separation for the (now) established HEA, is absolutely a filler-story – trying to recapture some of the tension that the will-they-or-won’t-they romance once helped fill.

‘Silence Fallen’ is also not a very good filler-story … it momentarily drags readers back into a complicated supernatural political network that I think many fans breathed a sigh of relief when they thought it was over and done with in ‘Fire Touched’. We’re dragged into European vampire and werewolf politicking, and there’s so much backstory, asides, and long paragraphs of info-dumping that takes us out of any immediate action we may have wanted to revel in. And it’s all for nought – because it’s pretty clear by story’s end that none of what we just read is going to really impact the Columbia Basin Pack once Mercy is home safe. Basically – this entire book and any of its ramifications can be kept in Europe, and not affect a single thing back home for Mercy and Adam. Which is another polite way of saying … you could skip this one, if you really wanted to.

And I say that, even as fan-favourite Stefan steps back on the scene for this vampire-heavy plot. Unfortunately he’s under-used and underwhelming, and I get the sense that Briggs was holding back from teasing fans with anything too Mercy/Stefan big, because that would leave an indelible mark on the series universe, and that’s not what this book is about.

The only thing that’s stopping me from giving this book an even lower score is the a light-bulb *wink-wink* reveal at the end, which is very cute and a bit of a delight … even as it’s also a cop-out, and is not establishing anything new in a certain relationship dynamic. It’s previously-trodden ground, not furthering any characterisations, but I still enjoyed it and I’m probably just grasping at straws for one of my fave series.

Honestly, after reading ‘Silence Fallen’ I’m mostly wondering where we go from here, and if Patricia Briggs really has any appetite to keep telling Mercy’s story…?

It’s interesting to note that ‘Silence’ is on Brigg’s new timeline of book-releases – where once we had a 2 or so year wait for Mercy, and an ‘Alpha & Omega’ release in-between, we’re now getting one Mercy book a year … and a longer wait for ‘Alpha & Omega’ (the last book for Charles and Anna released in 2015, the next instalment is coming 2018).

For me, personally, I think Briggs may be in a bit of a conundrum … I think lots of fans would like to see Mercy and Adam expand their family. And I’d be fine with that – whatever – but I know in past books Adam’s made clear that he doesn’t want more kids, and I don’t think Mercy feels like a baby would make her life “complete” in any way (and her step-daughter Jess is her daughter, they’re already a family). Anna from ‘Alpha & Omega’ meanwhile, has been teasing that possibility for a while now … and there are higher-stakes involved for her as a werewolf, and given what happened to Charles’s mother to make him the only born werewolf – that story is more intriguing to me, and all those possibilities.

But where does Mercy go from here, if the next chapter in her series isn’t revolving around becoming a mother, as many fans predict it will be? (which – to be clear – I reject the notion that a female protagonist will only “advance” and have a seemingly “happy life” in her own story, if she becomes a mother. Just – no.)


And I feel this even more after reading her 'Frequently Asked Questions' page - because Briggs has addressed some big questions, with infuriatingly non-committal answers. To the topic of 'how many more Mercy and Alpha & Omega books will there be?' The answer is: "Patty has said that as long as she's having fun writing them, can keep them fresh and exciting, and they're selling well, she'll continue to write them indefinitely!" That scares me ... as someone who has had to give up on Anita Blake and the Blackdagger Brotherhood books for that very reason. As to; 'Will Mercy/Anna have babies?' her answer is; "They would have to play it safe and avoid adventures, which - face it - is boring!" Ok. Fair enough. And finally; 'When will Leah/Christy die a horrible and painful death?' - to which the response is; "These are ladies we just love to hate! If they were gone, we'd have to find another character to hate on, and that would be very frustrating, so it's just easier to keep them around, don't you think?" ... that's sucky to me that she even addressed this, because it means she's nixing any idea of ever writing a Bran book for one, and is basically saying that these contingents of Bran and Adam's packs are just going to be forever stagnant. Sigh.

I need to remember that it’s been hinted at in a few books now (and also in ‘Silence Fallen’) that a lot of Mercy being in sticky situations may come down to Coyote wanting her to be there … to act as a conduit for Coyote … like she has a “higher-purpose”, so to speak. That could be interesting. But I think letting Mercy act on behalf of Coyote, while also juggling being happy and content in a pack-family is more interesting and I hope Briggs explores those conflicts in future, instead of giving us this isolationist Mercy story, that ultimately has little impact on her life or the series' universe.

P.S. – I read this book (and wrote my review) in November 2016, before announcement of the tragic and sudden death of Mike Briggs … and it did give me a pang of guilt and further disappointment that I didn’t love ‘Silence Fallen’ more. But this is just one book, and I'm only one reader, and I’ll always be a fan - regardless of a bump in the bookish road. Also as a fan, I’ll always be patient and understanding of whatever decision an author makes with regards to the continuation of their series, especially when personal circumstances such as these may be informing that future.