'Under the Love Umbrella' by Allison Colpoys and Davina Francesca Bell 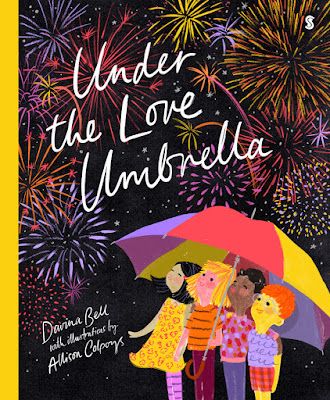 Whatever you fear, come close my dear
You’re tucked in safe for always here
And I will never not be near
Because of our love umbrella

From this award-winning creative duo comes a stunning celebration of the joy and comfort that love can bring – wherever we roam in the big, wild world.

‘Under the Love Umbrella’ is the new picture book written by Davina Francesca Bell, with illustrations by Allison Colpoys. It’s the second picture book from the duo, the first being ‘The Underwater Fancy-Dress Parade’ of 2016.

I don’t often review picture books – but clearly last year when I made my first exception for 'Australia to Z' by Armin Greder on the blog, I kicked off a new tradition for myself. It’s also probably that since joining Jacinta DiMase Management (which specialises in picture-book authors and illustrators) I’ve been introduced and given a bit more background to this art form in Australia. And as such – I’ve become serious appreciative, and find myself buying the books I really can’t seem to turn away from … and ‘Under the Love Umbrella’ is one such.

This new story from Bell and Colpoys is basically a giant hug in picture-book form, which is also why I’d recommend it for young and old. The story is more of Bell’s tenderness that was on display in ‘Fancy-Dress Parade’, as ‘Under the Love Umbrella’ gives an ode to the metaphor of safety, love and acceptance. It’s a beautifully subtle and tender message she communicates most effectively with rhythm and rhyme – and it’s one that will prompt the question from young readers at the end; “who is under my love umbrella?”

Allison Colpoys – perhaps the most in-demand artist in the Australian books world (and for good reason) – brings more of her magic to Bell’s words. She uses mostly fluro colours to great effect, nevermore than when they’re presented against a darker background (as on the cover, with fireworks). There’s something here that feels a little cool retro in her illustrations too, like they could be something out of the Little Golden Book series – it’s a sweet nostalgia. Honestly, the book is so intensely lovely I really just want to hang it on my wall for all to admire.

I will also make a note here that the children and families depicted within are from diverse backgrounds – Joe, Brian, Izzy and Grace are racially diverse, and there’s no fine point put on whether or not they have “traditional” “nuclear” families. Albeit from my limited knowledge, I at least know this is still rare in children’s picture books – though it shouldn’t be. Davina Bell even commented on it in the press release I was sent with the book, saying;

We love how people have responded to the diversity in the book. But while it was a conscious choice to include a range of backgrounds and family constellations, the situations we represented sprang from the characters as they came to life in our minds, rather than from a deliberate strategy or design.
That said, the timing of this book feels fortuitous. There has never been a more important moment to tie love and diversity together in the minds of children, and one of the privileges of being a picture-book creator is the chance to speak into their hearts through story.

We all know the times Bell is alluding to, and I couldn’t agree more that a book with this level of illustrated representation, and a message about bringing those you love into safety under your love umbrella … well, it’s safe to say we could all use this book. Which is why I’d highly recommend it for everyone – age be damned.

This was my first favourite book of 2017, and it feels fitting that it’s one with such a message.