'How to Walk Away' by Katherine Center 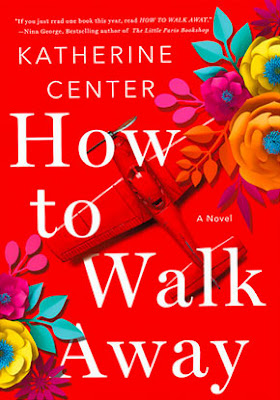 From the BLURB:
Margaret Jacobsen has a bright future ahead of her: a fiancé she adores, her dream job, and the promise of a picture-perfect life just around the corner. Then, suddenly, on what should have been one of the happiest days of her life, everything she worked for is taken away in one tumultuous moment.
In the hospital and forced to face the possibility that nothing will ever be the same again, Margaret must figure out how to move forward on her own terms while facing long-held family secrets, devastating heartbreak, and the idea that love might find her in the last place she would ever expect.
Having just finished Center's 2019 book 'Things You Save in a Fire' - I went back to this 2018 title because they're *kind of* linked.In 'Fire' the firefighter protagonist Cassie references one particular call out that stayed with her; a woman badly burned and with a spinal injury after being involved in a light aircraft accident. An accident that happened within a few hours of her boyfriend proposing - the boyfriend who was the pilot and walked away from the crash without a scratch. Cassie in 'Fire' wonders what became of that woman, that she can't quite fathom the ways her life was altered from that moment on. This pinged for me, because I thought it sounded like one of Center's previous books and - lo! - it was indeed.'How to Walk Away' details that very woman whose life was so utterly altered by one accident - Margaret Jacobsen who has to have skin-graft surgery and may have paraplegia below the knee forever. The book is very concentrated on the six weeks that Margaret 'Maggie' begins physical and occupational therapy, once she's well enough to grasp her new situation and start working towards rebuilding her life.Six-weeks is all that her insurance company will cover, so that's why it's such a tight timeline and very focused on her rehabilitation (which rings true for American healthcare systems, and I found quite moving in and of itself). She's not only trying to get her altered body to cooperate, but she's juggling a fiancee (maybe?) who's gone off the rails, a pushy mother, understanding father, and her estranged sister Kitty who has flown home from New York to nag her sister into healing, apparently.There's also physical therapist Iain - a Scottish giant of a man who wears crankypants constantly and pushes Maggie and her belief in herself. The two of them develop a special bond, that also feels very fragile for the circumstances in which they've met ...I really enjoyed this novel (and I'm glad I followed my instincts to keep reading Center's backlist - particularly this one that harmonises so well with 'Things You Save in a Fire' the two of them acting as a sort of duology). I was also glad that the same way Center did such a marvellous job in 'Fire' of telling a true and fascinating story about firefighting, she did the same here about the challenges of spinal injuries, reality of PT (physical therapy) and existing in a world unfairly designed for the able-bodied. I did worry when a lot of Maggie's internal story seemed to be around "fixing" herself and recovering fully ... but that's actually Center being very honest about the stages of grief a person goes through for their own health and body after an accident.I also thought the end-point that Maggie got to with her career ambitions was a little twee and cliche, and as with 'Fire' I did wish we got to exist a little longer in the happily ever after and how her life looked down the line.But overall I loved this story too, and it has further clarified for me how much I love Center's writing!
4/5
Posted by Danielle at 9:23 AM