'Things You Save in a Fire' by Katherine Center 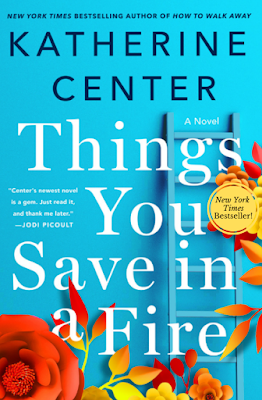 From the BLURB:
Cassie Hanwell was born for emergencies. As one of the only female firefighters in her Texas firehouse, she’s seen her fair share of them, and she’s a total pro at other people’s tragedies. But when her estranged and ailing mother asks her to give up her whole life and move to Boston, Cassie suddenly has an emergency of her own.
The tough, old-school Boston firehouse is as different from Cassie’s old job as it could possibly be. Hazing, a lack of funding, and poor facilities mean that the firemen aren’t exactly thrilled to have a “lady” on the crew—even one as competent and smart as Cassie. Except for the infatuation-inspiring rookie, who doesn’t seem to mind having Cassie around. But she can’t think about that. Because love is girly, and it’s not her thing. And don’t forget the advice her old captain gave her: Never date firefighters. Cassie can feel her resolve slipping . . . and it means risking everything—the only job she’s ever loved and the hero she’s worked like hell to become.
'Things You Save in the Fire' is the 2019 novel from Katherin Center, and it was my first time reading her, but it won't be my last!
This is the story of a female Texas firefighter who lands in hot-water when she gives a politician from her past their comeuppance ... but her career is somewhat saved when she's offered a move to Boston, to let the controversy blow over - that also coincides with her estranged mother begging her to come stay, and help her out post eye-surgery.There's a lot of tension and fault-lines established early; our heroine Cassie hasn't been close to her mother, ever since she walked out on the family on Cassie's 16th birthday to be with the man she'd been having an affair with. Cassie is also moving to an old-school (and rundown) Boston firehouse full of old-guard firefighters who don't like the idea of a woman on their turf.To add to the complications is Cassie starting her new job alongside an Irish-legacy firefighter rookie who is the first person to make Cassie's heart beat fast and even consider knocking down some of the walls she's put up over the years to protect herself.I loved this book - I wasn't surprised at the acknowledgements to find that Center's partner was once a medic and is still a volunteer firefighter, because the insights she gives to the culture of camaraderie (tinged with misogyny) and the patterns of fires was really fascinating and clearly came from a place of deep respect to understanding. I also really loved the romance between Cassie and 'The Rookie' - Owen. It was a slow-burn (ha!) that really paid off.I cried buckets reading this, and my only criticism was that the last two-thirds or so of the novel felt extremely rushed and like a fast-forwarded montage I would have appreciated living inside of a little more as reader.But overall I'm glad I've finally given this author a try, and I look forward to delving into her backlist!
4/5
Posted by Danielle at 9:21 AM