'I Talk Like a River' written by Jordan Scott, illustrated by Sydney Smith 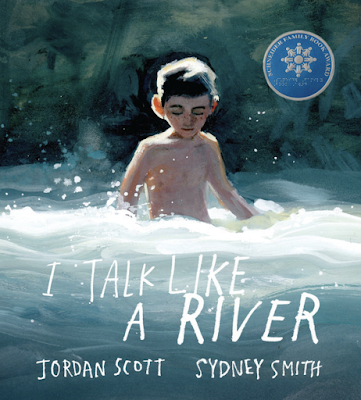 I wake up each morning with the sounds of words all around me.

When a boy who stutters feels isolated, alone, and incapable of communicating in the way he’d like, it takes a kindly father and a walk by the river to help him find his voice. Compassionate parents everywhere will instantly recognize a father’s ability to reconnect a child with the world around him.

Poet Jordan Scott writes movingly in this powerful and ultimately uplifting book, based on his own experience, and masterfully illustrated by Greenaway Medalist Sydney Smith. A book for any child who feels lost, lonely, or unable to fit in.

Absolutely beautiful messaging, wonderfully and artfully told. About a boy who stutters, and what that *feels* like both physically and emotionally.On “bad speech days” when his classmates laugh and the words won’t come out, his Dad collects him from school and they go to the boy’s favourite place - the river. It’s here that the father makes the connection that he “talks like a river”, the “whirling, bubbling, churning, and crashing,” river . But beyond that is also calm, beyond the rapids where “the water is smooth and glistening.”It’s not just that Jordan Scott has provided a fabulous simile for young people to think of their speech patterns, but he’s portrayed a caring and patient father gentle with his son and the obstacles he’s got before him. It’s heartwarming and wonderful.Sydney Smith’s illustrations are watercolour, with delightful bleeds and runs that mimic the water theme - and they’ve captured light on water play magnificently.At the back of the book is a letter from Scott called “How I Speak” which details his own childhood - and adulthood - having a stutter, being “dysfluent” and how that’s apart of his identity.This book is very special. I bought it for my nephew who is 3 and stutters, and will be beginning speech therapy shortly - I wanted to gift it to him one day if he needs it, but I think I also hoped for some insight into how I could help him ... and I know Jordan Scott gave me that within these pages.