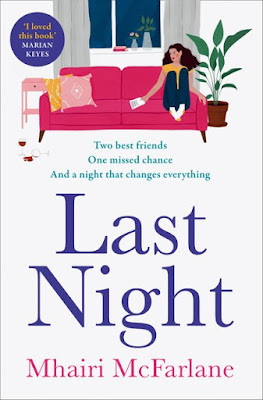 And a night that changes everything.

Eve, Justin, Susie and Ed have been friends since they were eighteen. Now in their 30s, the four are still as close as ever, Thursday pub quiz night is still sacred, and Eve is still secretly in love with Ed. Maybe Eve should have moved on by now, but she can’t stop thinking about what could have been. And she knows Ed sometimes thinks about it too. Then one night, in an instant, all their lives change forever. And, as Eve learns she didn’t know her friends as well as she thought, she also discovers she isn’t the only person keeping secrets…

'Last Night' is the seventh stand-alone contemporary women's fiction novel from beloved Scottish author, Mhairi McFarlane.A new McFarlane book is always cause for joy; although I still haven't read her 2019 novel, 'If I Never Met You' - I think because my tastes were so mercurial throughout 2020. 'Last Night' (also called 'Just Last Night' outside of ANZ-territories) is more of what devout fans and readers have come to love in her books; something I like to call "Macbeth's Jonbar Hinge for 30-Something's". Allow me to explain...I always think of her books in terms this 'Macbeth' quote I love; "I am in blood stepped in so far, that should I wade no more, returning were as tedious as go o'er.” And 'Jonbar Hinge' is the fictional concept of a crucial point of divergence between two outcomes. These two concepts are where Mhairi McFarlane books meet, to me. They're usually about a woman in her late-20s to early-30s whose life is not going ~great~ but she's too scared to make a change, until a change is made for her in some alarming way that causes her to move or be moved, and take up the mantel of her self-determination once again.In 'Last Night' our hero is 34-year-old Eve who is part of a foursome best-friend group also consisting of Justin, Susie, and Ed - who've been friends since school. The only downside to this foursome is that Eve has been in love with Ed for the longest time, even though he's been in a 16-year relationship with the God-awful Hester, who he is about to marry.Something of this reminded me of the brilliant British TV series 'Lovesick' and the relationship up's and down's of besties Dylan & Evie. So this was right up my alley - unrequited love, and best-friends-to-lovers tropes are so *me*! And even though I raised eyebrows at the SIXTEEN-YEARS of pining, and Ed's poor from in the past ... I did love this friendship group, and I loved getting to know Eve straight out the gate in the context of a pub-quiz with her besties. This lot are *funny* and I legit guffawed for pages.I particularly loved the character of Susie - Eve's longest best friend - who had some killed lines, like;

My infatuation was Jez the premier weed dealer, a bedraggled River Phoenix lookalike at a neighbouring college with whom I'd had my deeply unfulfilling loss of virginity months prior. ('River Phoenix?! Canal Phoenix more like,' I can still hear Susie saying. 'Canal Pigeon.')

The first few chapters of the book are all about Eve's pining for Ed and a bullet-dodged one-night-stand she's painfully living through ... and then the McFarlane twist comes in - in the form of Susie's sudden death in a car-accident.This sends the book colliding off into a wholly different and deeper stratosphere as Eve, Ed and Justin band together to organise the funeral - since Susie's Mum is dead, her father has dementia and her older brother is estranged and living in New York. It falls to Eve - who grew up with Susie's brother Finlay as a vague presence throughout their childhood - to reach out to him, and bring him home.But then the story takes on another layer, when Eve discovers a secret about Susie that fractures their friendship, somewhat - even in death. It also has complications for their friendship group, right when the brother Finlay returns and his taciturn and somewhat menacing presence keeps Eve off-kilter. Even more so when she has to help Finlay manage his and Susie's father ...I loved 'Last Night' exactly because it both hits all the usual McFarlane notes (aforementioned "Macbeth's Jonbar Hinge for 30-Something's") but also seems to go a little deeper than her other books - which often spin around one-that-got-away, cheating partners, lost jobs etc. In this, she's really examining grief and the audacity of finality, mixed with the ways that we can still find hidden-depths and secrets to those we've lost, that maddeningly keeps a conversation going but never finished. And there's the added layers of pining for Ed, while the brooding Finlay comes on the scene - all very much in keeping with the McFarlane formula.Female friendships are always an important, if secondary factor in a McFarlane novel. So I think the added feeling of depth here, comes from the gut-punch of a lost-love in the form of a best female friend. A very unique and acute pain - to lose the keeper of that secret side of us reserved for long-time friends who've grown and seen all sides of us (or so we think).I also love that this is a novel that runs the gamut of grief - including anger. There are times here when Eve is truly *furious* and has every right to be. At one point she says; I feel like Bette Davis, gene-spliced with a cobra. And - ummmm - that's my *JAM*, right there! That's my perfect woman. I love that McFarlane uses the characters of Ed and Finlay to have rather deep and meaningful's about The Nice Guy trap, and the toxicity of people who don't take responsibility for their actions. Here are the subtle ways that romance and women's fiction authors are advancing the genre, and having truly deeply important discussions with their readers - Mhairi McFarlane is doing God's work here, truly.I will say; I thought the novel was a little top-heavy. The 'Last Night' of the title plays out over multiple chapters and a very funny, extended scene between Eve and a potential one-night-stand. And I totally get why - this is Mhairi McFarlane playing with the elasticity of time where grief is involved. Hyper-specifics that stretch a moment, and then the rush of grief like jet-lag that speeds things up. But I wished that we got balanced out in the book more, with a little extra at the end about Finlay and more scenes there. But that's always my wish in a McFarlane book; more time. More time with these characters I come to absolutely adore in just 403-pages. 'Last Night' is no different, and I already wish I was back to the beginning meeting them all again.