'The Road Trip' by Beth O'Leary 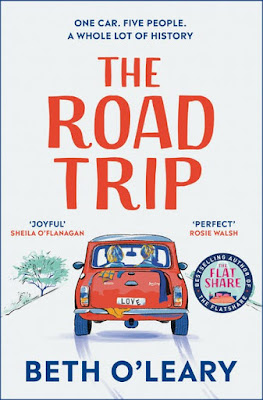 Addie and her sister are about to embark on an epic road trip to a friend's wedding in rural Scotland. The playlist is all planned and the snacks are packed.

But, not long after setting off, a car slams into the back of theirs. The driver is none other than Addie's ex, Dylan, who she's avoided since their traumatic break-up two years earlier.Dylan and his best mate are heading to the wedding too, and they've totalled their car, so Addie has no choice but to offer them a ride. The car is soon jam-packed full of luggage and secrets, and with four hundred miles ahead of them, Dylan and Addie can't avoid confronting the very messy history of their relationship...Will they make it to the wedding on time? And, more importantly... is this really the end of the road for Addie and Dylan?

'The Road Trip' is British author Beth O'Leary's latest women's fiction book. After the overnight success of her 2019 debut 'The Flatshare' (which I *loved*) and rising popularity with 2020 title 'The Switch,' her third book in three-years was hotly anticipated and eagerly devoured by her increasing fanbase.And - look - I really enjoyed it.I did!It's just ... in the last half of the book; I'm talking the sprint to the finish at 50-pages or so, I had this epiphany I now can't shake and it's kinda clouded my whole reading of it.The story is told in alternating chapters by protagonists' Addie and Dylan, and jumps between 'Now' and 'Then'. In the 'Now' - Dylan and his friend Marcus are en route to a wedding when they've suddenly hit the car in front of them and had a right fender-bender. The car in front just so happens to have Rodney, Deb, and Deb's sister Addie - Dylan's ex-girlfriend he hasn't spoken to in two-years, and all of whom are also traipsing out to the same wedding. A détente is reached and it's agreed that they'll all squish into Deb's mini and make the 8-hour trek from Chichester to Scotland to make the wedding in the nick of time.In 'Then' Addie and Deb are caretakers at a villa in Provence for a summer, where Dylan appears after his family cancelled on a cozy trip, and he's decided to traipse out to his friend's empty villa on his lonesome to get some poetry written. What he doesn't count on is the beautiful caretaker Addie, who takes his breath away and the two tumble into a summer romance that evolves into so much more ...In the 'Now' Dylan and Addie have been separated after a cataclysmic break-up that's painstakingly alluded to and pieced together in the flashback chapters. What becomes clearer and clearer however, is that Dylan's best-friend Marcus is somehow deeply involved in their break and thus his presence in the mini makes everything all the more delicate for Dylan and Addie's already-awkward reunion.And look, without giving too much away; here is the realisation I came to that kind of clouded my overall enjoyment of the book ... and this *might* be a Spoiler, so;

While I read a little bit of 2014 TV series 'Lovesick' in here, (Dylan/Addie/Marcus kinda reminded me of Dylan/Evie/Luke - I can't believe the same name as Johnny Flynn's character is pure coincidence. And then I just could not shake the idea of Joshua McGuire's Angus as Rodney!) the bigger connection I found was 'Love Actually'.

I could not shake the connection that Marcus was maybe a head-nod to Andrew Lincoln's Mark character, and the love-triangle he's in with Chiwetel Ejiofor's Peter and Keira Knightley's ugly hat-wearing Juliet (remember the video scene?!)

That scene - of Juliet turning to Mark with bewilderment, after watching the wedding-video he filmed (all shots of her, turns out) and saying; "But, you never talk to me? You always talk to Peter. You don't like me!" those lines are basically where a good portion of 'The Road Trip' and Addie & Dylan's complicated, messy love affair lives. And that's ~fine~ but it maybe does more heavy-lifting for the anti-Love Actually backlash that's been steadily sprouting in the nearing 20-years since the film came out. You know what I mean; all that 'The case against Love Actually' stuff.

Because - truth be told - a book that largely hinges on toxic men being toxic to innocent women merely for ~existing~ and being beautiful is not a great place to be reading for some 401-pages? And for me it was a case of; once you connect it, you can't un-connect it - y'know? So yeah. I liked this. Not as much as 'The Flatshare', and Beth O'Leary isn't yet up there with the likes of Mhairi McFarlane for me. But she's a good, reliable read - and fab company on cold April nights. Reading this also made me want to go back and re-watch 'Lovesick', and also look up and see if O'Leary has a fourth book scheduled yet (she sadly, does not - but I'm sure her ongoing success means an announcement is imminent!)It was just that last little sprint to the finish, and a hurdle in (maybe?) the inspirations that pulled me up short.3.5/5