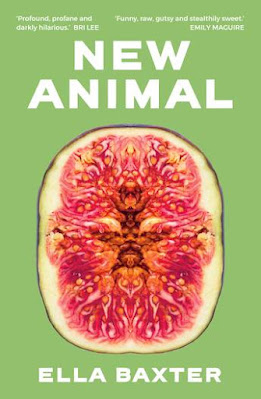 Deadpan, wise and heartbreakingly funny, New Animal is a stunning debut.
***
Okay. Full-disclosure; I would *not* have read this book were it not for the recommendation of Jaclyn Crupi at the Hill of Content Bookshop absolutely ~raving~ about it. I trust Jaclyn, she hasn't led me astray yet.And yet - and yet; I looked at this cover and that blurb ("... a struggling Tasmanian BDSM club" HMMMMMMMMMM) and thought; What am I getting myself into?! Surely this is just an Australian Sally Rooney (complete with baffling BDSM segue) attempt, a somewhat hodge-podge New Literary.Well, well, well.I was wrong. I judged a book by its cover (and an admittedly terrible blurb) and were it not for word-of-mouth, I'd have missed out on one of the most refreshing and eclectic reads I've come across in years. A book that absolutely terrified me for the author's sheer authenticity and audacity of voice.'New Animal' is about grief and loneliness, self-absorption and absolution. We find ourselves with Amelia, a brittle but brilliant protagonist on the worst day of her life; when the sudden loss of her mother seems to send her catapulting even further into the wilderness of her loneliness, and compulsions for fleeting connections. Around her is a Tasmania like I've never read before, a character unto its own strange self - amidst a cast of characters who are so wildly wonderful, I absolutely loved holding them close for the span of a sparse 240-pages.What is this like?! Who does Ella Baxter remind me of? Sally Rooney comparisons will abound and that's okay if it brings people in. But I actually think the fact of a family mortuary business heralds a wonderful connection to the writing of Alan Ball and 'Six Feet Under'. It's not even the purely cosmetic connection of death-business; it's more for the beauty and absurdity that Ball and Baxter seem brilliantly able to unearth in life itself. Grotesque grief, carnal normal and pitch-perfect deadpan delivery.
I'll also say that Baxter's book would be for anyone who loves Caitlin Doughty and her non-fiction books, but especially her YouTube channel "Ask a Mortician".I absolutely, wholeheartedly loved this book. I gorged myself on it and then wanted to go off and read absolutely everything Ella Baxter has ever put into the universe ... And the fact that it's just *this* - this one triumphant and intimidating debut novel - elicits both excitement and frustration. This is someone who writes in a fever, without fear or favour. And I'm just in awe.Read it read it read it.Forget the blurb and the cover.It's a wild ride but it's worth it.
5/5
Posted by Danielle at 4:37 PM