'Howling at the Moon' by Karen MACINERNEY 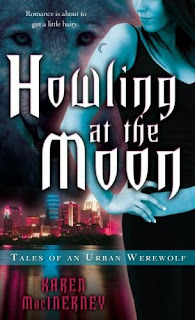 It had been a heck of a day. My mom was in jail for murder. For the first time, I’d seen and been identified by another werewolf – a gorgeous one, to be sure, but still a werewolf. And let’s not forget the cute little poem on my desk, which meant somebody was about to let the cat – or in this case, the wolf – out of the bag. (page 32)