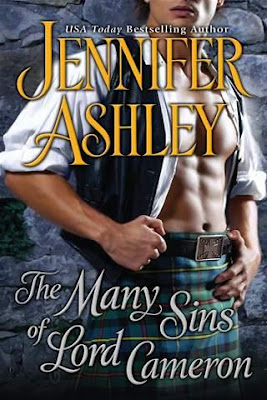 A renowned rake, Cameron Mackenzie doesn't care if Ainsley Douglas has a virtuous excuse for sneaking around his bedchamber. He only cares that she's at his mercy. One kiss at a time, he plans to seduce her. But what starts out as a lusty diversion may break Cam's own rules.

Ainsley Douglas has the most bothersome task of circumventing a blackmail attempt against the Queen of England. An unhappily married ton darling has got it into her pretty, conniving little head to exploit Queen Victoria’s private infatuation with her servant, John Brown. Ainsley, being a graduate of the Pringle Select Academy for Young Ladies and a family favourite of the Queen, has been given the mission to retrieve the incriminating love letters from the bothersome blackmailer.

Ainsley’s only opportunity to confront the lady is at a house party being thrown by politico, Hart Mackenzie, at his family estate. And Ainsley’s one weakness is in attendance – Cameron Mackenzie. Six years ago Ainsley and Cameron had a seductive near-miss where Ainsley nearly found herself committing adultery to be with the smoulderingly handsome middle Mackenzie brother. Six years on and Ainsley is a widower – Cameron is a cavorting Lothario who enjoys losing himself in training horses and swilling whiskey.

When these two join forces to curb the blackmailer sparks are reignited. Cameron is himself a widower, survivor of a horrendous marriage that ended in his wife’s suicide and him being accused of her murder. The last thing he could ever want is to marry again – but Ainsley Douglas piqued his interest six years ago, and now she’s back and more appealing than ever . . .

I fell in love with Ashley’s series last year, when I read first book ‘The Madness of Lord Ian Mackenzie.’ I loved Ashley’s blend of unconventional rakes, family saga and seductive romantic entanglements . . . I was somewhat deflated by second book ‘Lady Isabella’s Scandalous Marriage.’ But I am well and truly enamoured of the Mackenzie men, and settled into this series for the long haul. Still, I was rather delighted to read that Cameron’s book brings the series back to romantic brilliance.

Cameron piqued my interest back in Ian’s book, when it was revealed that his wife met an untimely death that left Cameron’s reputation in tatters and the relationship with his son somewhat strained. Middle child he may be, but Cameron’s mysterious past, shrouded in tragedy and London gossip, had me very much intrigued. Still, I was unprepared for the devastating lengths Jennifer Ashley would go to with Cameron’s past. We learn about his ‘mad’ wife, Elizabeth, who was older than Cameron when they married and remained hell-bent on using him for his money while carrying on her hedonistic lifestyle. Elizabeth was truly heinous – a self-destructive, bitter and egotistical lecher. She scarred Cameron and left him a shell of a man. His only saving grace was their son, Daniel, whom Cameron protected against his wife’s callousness. Honestly, when you read what Cameron went through in his first marriage you will alternate between disgust and outright sympathy.

So when Cameron runs into Ainsley Douglas, six years after their first seductive almost-encounter, he is attracted and intrigued . . . but in no way likely to start a relationship. Which is fine by Ainsley – she is a working widow, dependent upon the Queen’s paycheque and her brother’s kindness. Ainsley doesn’t expect a Mackenzie Lord to be serious about her – not to mention she has her own war wounds from ruined relationships.

It’s only through undeniable attraction (and Daniel Mackenzie’s match-making) that these two form an unlikely but undeniable bond. I loved reading them together, because it’s a matter of opposites attracting. Despite her station in life, Ainsley is upbeat and cheerful – always looking on the bright side and willing to give a helping hand to those she loves. Cameron, by contrast, is pessimistic and solitary; a veritable curmudgeon except where his horses and his close-knit family are concerned. They bring out the best in each other, and work at tearing down each other’s walls and defeating the other’s demons;

“I love your hair,” Cameron said. “I've always wanted to see it down.”
“A bit difficult to tame, I've always found.”
“I don’t want it tame.” Cameron fisted a lock of hair, kissed it. “I want it wild. I want you wild, Ainsley. I know it’s in you.” He put his hand between her breasts, right over her heart.
“Wild? Me?” She contrived to look innocent.
“I work with horses all day, every day. I know which ones are happy to plod along and which ones are bursting to throw off their fetters and run free.”

I did love Cameron – it’s impossible not to, when this big strong and handsome man has such a tender touch despite a dark past. Still, my favourite Mackenzie man remains Hart Mackenzie – the oldest brother and hardest nut to crack. Hart is a politician and widower, whose frail wife died in childbirth years ago. Hart was rumoured to host orgies in his youth, before politics became his world. But even before all that, Hart was the first Mackenzie to fall in love – and get his heart broken. He was engaged to Eleanor, but she broke off the engagement (for reasons unknown, but hinted at) and Hart has never been the same since.

I love Hart. What can I say? I like them tall, dark and unyielding. And I especially loved him in this book, because we get to meet his ‘one that got away’. Eleanor is a most interesting woman, with wise words to share with her friend about those pesky and delicious Mackenzie men;

Eleanor smiled as she lifted her teacup. “Do be careful, Ainsley. They entice you, these Mackenzies, first with their wickedness and then with all that is heartbreaking.”

I’m just perturbed that I’ll have to wait for Hart’s book, ‘The Duke’s Perfect Wife’, until April 2012. Bother and damnation! But my ire was somewhat lessened when I discovered that Ms Ashley has two more books planned after Hart’s instalment. In 2013 we’ll get ‘The Seduction of Elliott McBride’ – not a Mackenzie, but Ainsley’s brother who has an interesting story to tell. And in October 2013 we’ll be treated to ‘The Life and Love of Daniel Mackenzie’ – which I am *THRILLED* about because Daniel proved himself a lovable and ramshackle young man in ‘Many Sins’, and I am eager to read his transformation into a mad Mackenzie man!

Jennifer Ashley has well and truly suckered me into the Mackenzie family. I love these men; with their brutish facades, tragic pasts and tender hearts. Lord Cameron is another brilliant protagonist, paired with an equally infectious heroine. Ashley’s ‘Highland Pleasures’ series keeps getting better and better – but I predict she will hit her stride with the beautiful and cold, Hart Mackenzie. Hurry up 2012! 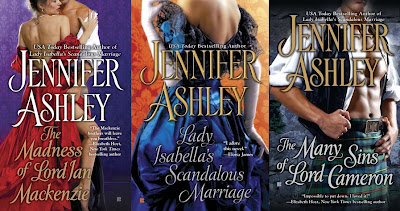