‘Ask the Passengers’ by A.S. King 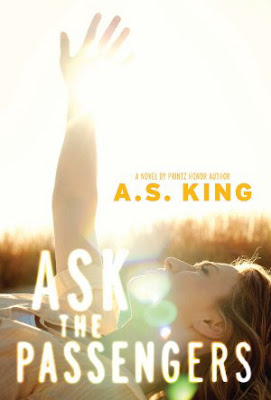 Astrid Jones copes with her small town's gossip and narrow-mindedness by staring at the sky and imagining that she's sending love to the passengers in the airplanes flying high over her backyard. Maybe they'll know what to do with it. Maybe it'll make them happy. Maybe they'll need it. Her mother doesn't want it, her father's always stoned, her perfect sister's too busy trying to fit in, and the people in her small town would never allow her to love the person she really wants to: another girl named Dee.

There's no one Astrid feels she can talk to about this deep secret or the profound questions that she's trying to answer. But little does she know just how much sending her love--and asking the right questions--will affect the passengers' lives, and her own, for the better.

Here is what they say about Astrid Jones and her family in their small-town of Unity Valley:

•    Their mother hardly ever leaves the house. But she’s stuck-up, and thinks she’s above it all for keeping her fancy New York job.
•    The dad is a stoner – if he’s not making birdhouses, he’s taking a toke in the shed.
•    Youngest daughter, Ellis, is a mean hockey player. She fits right in here, a real small-town girl.
•    That Astrid Jones is a weird one – don’t know how she came to be friends with the nice Homecoming couple, Kristina and Justin. Did you know she really enjoyed her philosophy class (but hates Zeno of Elea)? Did you know she lies down on a picnic table in their backyard? Just lies there, for hours, staring at nothing.

But if people in Unity Valley knew the truth about a life in motion and how growing up is already a kaleidoscope of confusing without sexuality being thrown into the mix… they’d probably say something like this:

•    That mother has never loved her eldest daughter. She only has ‘mummy and me’ days with the younger sister, Ellis. Truth is, she doesn’t much care for her daughter, Astrid – doesn’t really like her all that much.
•    The dad smokes weed because he still regrets packing his family up and moving them from New York into this small town where the highlight of his year is the great stapler thief at work.
•    Ellis cares about what everyone thinks. Everyone. And she doesn’t appreciate other people’s assumptions that all hockey players are lesbians (even if she knows of at least two on her team and a rival school’s). Gross. Can’t they go off and have their lesbian luncheons somewhere else?
•    Astrid Jones might be a lesbian. Maybe. Possibly. In all likelihood. Because she loves kissing her co-worker, Dee Roberts, even if she’s not yet ready to say ‘Abracadabra’ and get hotter and heavier with her. But Astrid doesn’t want to come out. Because she’s seen Kristina and Justin intricately hide their respective boyfriend and girlfriend for two years now – and she can just imagine what Unity Valley would say if they knew how different she really was.

‘Ask the Passengers’ is the new novel from Printz honour author, A.S. King.

This novel has only been out as of October 23, but it’s already made the Publishers Weekly Best Book of 2012 list. And I’m inclined to think that that’s just the beginning… because, as usual, A.S. King is a unique force unto herself and ‘Ask the Passengers’ is truly spectacular for being a quirky, but relatable story, about a girl struggling to find herself.

First of all, it should be noted that there aren’t enough LGBT (lesbian, gay, bisexual, and transgender) young adult books out there. As the Young Adult Library Service Association’s blog pointed out recently, “There are 55 queer YA novels being published in in 2012, meaning that queer YA is just 1.6% of all YA coming out this year.” That’s pretty blood atrocious. Especially when you think that one of the main reasons anybody reads is to see a little of themselves reflected on the page – to connect to something in a character that they can relate to, struggle through or learn from. It’s awful to think that LGBT teens don’t have as many book offered to them with characters that reflect their experience or speak to them on an emotional/romantic level. So that’s one reason why A.S. King’s new novel ‘Ask the Passengers’ is so refreshing and important – merely for being apart of that 1.6%

I love A.S. King. I think she’s one of the most important YA authors to have emerged in the last ten years or so. I never read a King novel and say “she reminds me of…” No. A.S. King doesn’t remind me of anyone but herself – sure, I can see her influences include Kurt Vonnegut but when I crack open an A.S. King novel I always find something wholly original and crazy/beautiful, and come away truly believing that I’ve just read a little piece of her manic soul on the page. You know that old quote: “Writing is easy. You just open a vein and bleed”? I really, truly believe that of A.S. King because with all her novels it feels like she’s opening wounds and serving up her characters in their raw, bloodiest form. And it also feels like she’s slicing open a little part of the reader – opening up a window in us to look through and connect with her characters on the page, and herself by extension. And she does it again with Astrid Jones and ‘Ask the Passengers’.

Astrid is in many ways your typical teenage girl. She hates trigonometry (triangles – it’s all triangles!), isn’t as cool as her best friend Kristina, had a messy break-up with her ex-boyfriend, thinks her younger sister is the ‘favourite’ and hasn’t had a memorable conversation with her mother since she moved the family to Unity Valley from New York when Astrid was nine. But in many ways not easily seen on the surface, Astrid is trying to cope with being a big-minded girl in a small-town. She’s keeping Kristina and Justin’s homosexuality a secret. She knows her dad is stoned 99% of the time. She thinks her mum is borderline agoraphobic, and that her sister, Ellis, is small-mindedly homophobic. This is particularly troubling since Astrid has recently started kissing her co-worker, Dee Roberts, and liking it. A lot.

Something I love about King’s exploration of Astrid’s sexuality in this novel is that she asks the taboo questions and explores all aspects of wondering what it means to be kinda-sorta-maybe-possibly gay;

But now all I can think about is Dee and how this all started. How she told me how gorgeous I was. How flattered I felt. How exhilarating it was to be wanted. This is why I doubt. It’s the loophole. It’s the question no one ever wants to ask.
Am I doing this out of desperation? Is it some weird phase I’m going through? And why, if any of the answers are yes, does it feel so right?
There is a 747 high, leaving a crisp white line through the cloudless autumn sky. I ask the passengers: Am I really gay?
But they don’t answer me. They are reading their in-flight magazines and sipping ginger ale. I send them love – as much as I can gather. I ask them: What do I do now?


I think this is distilled particularly brilliantly in an exchange between Astrid and her mum – when her mum says “you’re either born gay or you’re not.” Which is the very accepting notion that ‘gayness’ isn’t a choice, it’s who you are. But that doesn’t leave much wriggle-room for Astrid to explore how she feels – about Dee, about girls, about dancing at the only gay bar in town, Atlantis.

Of course, this is Unity Valley and King can’t go past making a mockery of that name. She pulls some really weighty ideas into this novel without ever preaching to the reader. I was particularly chilled by a scene in Astrid’s humanities class; they’re learning about the holocaust and the Jews, Gypsies, black, cripples, and homosexuals who were killed. Of that list – a boy pipes up to say the Nazi’s “got it right” about the homosexuals. Amazing, isn’t it? All these prejudices we’ve conquered (but not entirely eradicated) often after bloody battles and hard-won freedom rights. But same-sex marriage still isn’t recognized and homosexuality is still a crime in some parts of the world – and if some people had their way, it would be illegal in some small-minded towns of America too. How far have we come, really?

I think if we kept a calendar of who gets called gay in high school, there would be a new person on every single day of the 180-day school year. Gay, dyke, fag, lesbo, homo, whatever. Every single one of us has heard it somewhere along the ride. It’s more common than the flu. More contagious, too. Nobody gossips about whether you have the flu or not.


King’s key to dealing with these rather heavy topics is Astrid. She’s a wonderful protagonist – both snarky, clever, thoughtful and lost. She’s pitch-perfect in every way, and we’re able to navigate the rather awful torrential waters of high school bullying only because we have Astrid’s sarcastic defences and thoughtful contemplation to help us through. It also helps that this isn’t a strictly LGBT-only book. King draws in a plethora of issues – like a not so great best friend who thinks she has more to lose than Astrid, a distant mother, determinedly ignorant father and Astrid missing the sisterly bond she and Ellis used to have. Yes, this is as an LGBT book – but King doesn’t write one-dimensional characters or issues. She’s pulling in stories about struggling friendships and a choking home life. Also refreshing in a LGBT novel is the added discussion of sexual pressure – when Astrid’s more experienced girlfriend is desperate to get hot n’ heavy but Astrid isn’t quite ready yet.

This being an aforementioned wholly original A.S. King novel, I guess some people would like to know right away what the ‘quirk’ is. In ‘Please Ignore Vera Dietz’ our protagonist was haunted by paper cut outs of her dead best friend, and her father provided helpful flow-charts for the reader to follow. In ‘Everybody Sees the Ants’ our young Lucky Linderman blurs reality as he dreams of saving his POW grandfather from the jungles of Laos. In ‘Ask the Passengers’ Astrid has a habit of laying on a picnic table and sending her love up to the airplane passengers flying overhead – and in small vignettes we read the repercussions of all that love. Oh, and she’s taken to speaking to an imaginary friend who is actually (Frank) Socrates – the classical Greek Athenian philosopher. Yes, it’s trademark King quirky. And I know some people think they don’t “get” these little asides that King writes so beautifully and mesmerizingly. But there’s really nothing to “get”. Life is crazy, A.S. King’s characters just so happen to sometimes manifest that craziness.

I loved everything about ‘Ask the Passengers’. I always love King’s quirky-cool stories in which she offers her heart on the page. Astrid’s story is particularly important for being part of the 1.6% of LGBT young adult fiction to come out of 2012 – but that statistic aside, ‘Ask the Passengers’ is just a damn good story about struggling with small-town minds when you’re a burgeoning philosopher.

Email ThisBlogThis!Share to TwitterShare to FacebookShare to Pinterest
Labels: A.S. King, YA