'Who's Your Real Mum?' picture-book review, and interview with author Bernadette Green 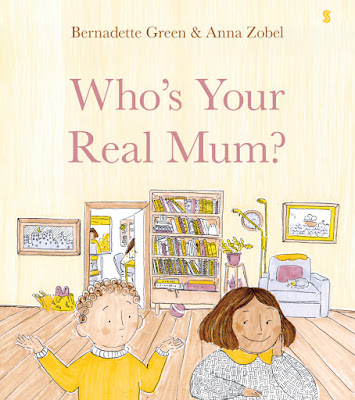 I am truly so delighted to have an interview on my blog (the first one in a LONG time!) and it’s with a dear friend of mine.

Bernadette Green and I worked for years at the same indie publishing house, and when I knew her she was always writing and creating. What looms most large in my memory was her fabulous stories of how she met her partner (from memory; there was a hay-bale fire involved, I’m not even kidding – nobody was hurt) and her two amazing children who were utter delights and a credit to their mothers. So I am absolutely thrilled to see that in 2020 – a year when there’s so much, and I mean SO MUCH to be down about – that I can take a moment in my little corner of the world to celebrate someone very dear to me, and congratulate them on a truly inspired and inspiring project.

Who’s Your Real Mum? is Bernadette’s debut picture-book, beautifully illustrated by Anna Zobel and out now with Scribble!

When Nicholas wants to know which of Elvi’s two mums is her real mum, she gives him lots of clues. Her real mum is a circus performer, and a pirate, and she even teaches spiders the art of web. But Nicholas still can’t work it out! Luckily, Elvi knows just how to explain it to her friend. . .

It is such a gorgeous story with an understanding and tender heart. There’s a lot of humour within, a nurturing of curiosity and absurdity but overall; it’s a story about family, and love – always love. This book is an essential for any library, school, and personal picture-book collection and will be wonderful reading for all types of families – those for whom the question or variation of Who’s Your Real Mum? will be well-trod territory, and for those families who’d be more inclined to ask such questions. This is a book for everyone; it does that very rare thing of being both a conversation-starter and answerer for kids young (and old!).

Anna Zobel’s illustrations also feel timeless, and lend this book the feeling that it’s bound to be a beloved classic.

I’m so, so, SO in love with this book – it has brightened my days, and will be one I gift to many new families in my life. So I’m also delighted to have had the opportunity to pose some questions to Bernadette and pick her brain a little bit … 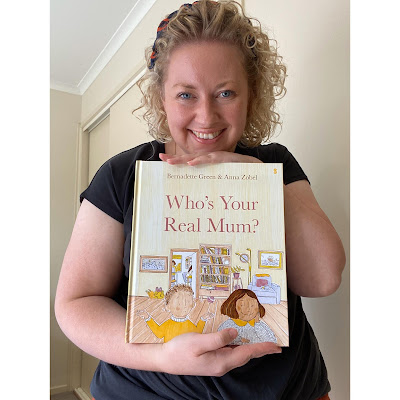 Q: Tell me about how you got published (agent or slush pile)?

I was studying Professional Writing and Editing at RMIT when author, Kate O’Donnell, came in to speak about YA writing. In her introduction she mentioned she was the production editor at Scribble kids’ Books. It was always being drilled into us to network and put ourselves out there, something I struggled with, but here was an opportunity too good to let go. It helped that Kate was incredibly friendly, so during the break I asked if I could talk to her about my picture book manuscript. Kate heard my pitch and a couple of days later I got an email asking if I could send it in.

Q: How long did it take you to write ‘Who's Your Real Mum?’ - from first
idea to final manuscript?

I wrote and polished it over a couple of months in late 2015. Then I left it for six months, came back and re-worked it, showed it to a friend and re-worked it again. I sent it to Scribble a couple of years after first writing it. There it went through some initial light edits and when illustrator, Anna Zobel, came on board I was asked to make some more changes. These were around writing some new fantasy scenes and pitching the story to a younger age group. Overall, from first word on paper to the final copy edit, it was a bit over four years but during this time there were long periods where the manuscript rested.

Q: Where do story ideas generally start for you? Do you first think of the
character, theme, ending? Or is it just a free-fall?

It depends on the story, for Who’s Your Real Mum? It began with both the theme and the characters.  At the same time, one of the parts of this book that has never changed is the ending. While I didn’t start with the ending, once it was written it felt right and so while the rest of the story was moved around and edited, the ending grounded the story and made it clear where it was going.

I am currently writing a middle grade novel and the initial idea started with a character. About seven years ago I was staying with my family at a friend’s in Daylesford, my girls were quite young and we were discussing the lack of female superheros and before we left for home I had Nuwa, an introverted, anxious and reluctant superhero, that I have loved building a world around.

Q: Did you always want to write picture-books?

I’ve written some short stories for adults, but all my longer works are for children and teenagers. After having children, picture book writing was a form I was particularly drawn to. Some of my favourite memories of when my kids were little was cuddling up with a good book. Even though my kids are now almost both teenagers, we still have all their favourite picture books. They not only hold the story within, but my children’s childhood now feels imprinted between the pages.

Q: How did you find your way to telling *this* story for *this* age-group?

I wrote this story because who’s your real mum? and variations on that question, were something my kids were asked at school. It’s a question with a lot of weight and I wanted to take some of the heaviness out of it. With the hope of taking pressure off kids from same-sex parented families, while at the same time creating something that respected the natural curiosity in children.

Initially I wrote it for early school age children but my editor, Kate O’Donnell, suggested aiming it at a younger audience. Nicholas is the character who insists there can only be one real mum, he asks for clues so he can work out which mum it is. By removing some of Nicholas’s dialogue asking for another and a better clue, it softened the tension between Elvi and Nicholas and shifted the story to a younger age group.

Q: What was your favourite scene to see illustrator Anna Zobel bring to
life on the page?

I couldn’t be happier with Anna’s illustrations, so it’s very hard to choose just one but if I could have had a superpower as a kid it would have been to fly. So, for me it would have to be the pages with the dragon and the pelicans, who are quite happy to take the kids for a ride.

Q: What do your two girls thinking of you being a published author?
They’re happy and proud. They both like the story and when I first wrote it my youngest drew the images for a dummy book. And of course, it was inspired by them and their experience so they both feel close to it.

Q: Picture-books have become so sophisticated and incredibly diversified in
recent years. I wonder if you can list five classic picture-books you love, and five more-recent titles you've delighted in?
Five classics
·      Scarface Claw by Lynley Dodd. I love that cat.

·      When my kids were little, they loved Princess Smartypants by Babette Cole.

·      Another favourite was Goodnight, written by Claire Masurel and illustrated by Marie H. Henry

And five slightly more recent titles
·      The Red Tree by Shaun Tan shows sadness beautifully and reminds us that it can come and go whenever it likes.

·      A Big Mooncake for Little Star by Grace Lin. Exquisite playful pictures using a mooncake to show the phases of the moon and the love between a child and their parent.

·      Lubna and Pebble, written by Wendy Meddour and illustrated by Daniel Egneus. A gentle telling of one girl’s story as she tries to find comfort in a refugee camp.

·      We’re Amazing 1,2,3! A Story about Friendship and Autism (Sesame Street) written by Leslie Kimmelan and illustrated by Mary Beth Nelson.

·      And Tango Makes Three, written by Justin Richardson and Peter Parnell, illustrated by Henry Cole. It’s not a recent book but I included it because it’s based on a real story about penguins and yet it was still banned in many places.

Q: What are you working on right now, and when can we expect it to hit
bookshelves?

I’m working on a couple of picture books which I hope to submit to my publisher later in the year. And with my middle-grade novel that centres around Nuwa, the reluctant and anxious superhero, I hope it gets picked up this year or next.

Q: Favourite author(s) and book(s) of all time?
I’ll do adults and kids.

I know this is old, but I’ve never forgotten the impact of Michael Ondaatje’s Coming Through Slaughter.

The Naming of Tishkin Silk by Glenda Millard is one of the saddest and most beautiful books I have ever read.

In picture books I love, A Sick Day for Amos McGee written by Philip C. Stead and illustrated by Erin E. Stead. This beautifully illustrated book focuses on kindness and friendship.

Q: What are you reading, loving and recommending right now?

I’m reading and loving Lenny’s Book of Everything by Karen Foxlee. The first paragraph is exquisite, and it keeps on giving.
I’m also enjoying listening to The Testaments by Margaret Atwood.

Q: Do you have any advice for budding young picture-book writers?

I found studying picture book writing enormously helpful, it’s a very different form to novel writing. But most importantly, write something that has an emotional impact on you, whether it’s laughing, crying or just giving you a warm feeling all over. 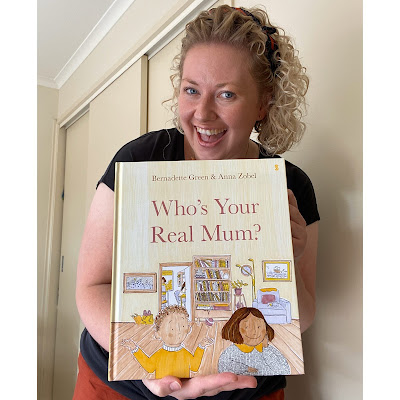 Who's Your Real Mum? is out now in Australia and New Zealand - with Scribble!