‘Devil in Spring’ The Ravenels #3 by Lisa Kleypas 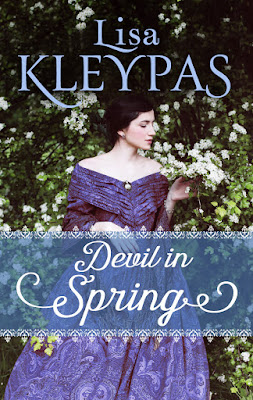 From the BLURB:
An eccentric wallflower . . .

Most debutantes dream of finding a husband. Lady Pandora Ravenel has different plans. The ambitious young beauty would much rather stay at home and plot out her new board game business than take part in the London Season. But one night at a glittering society ball, she's ensnared in a scandal with a wickedly handsome stranger.
A cynical rake . . .

After years of evading marital traps with ease, Gabriel, Lord St. Vincent, has finally been caught by a rebellious girl who couldn't be less suitable. In fact, she wants nothing to do with him. But Gabriel finds the high-spirited Pandora irresistible. He'll do whatever it takes to possess her, even if their marriage of convenience turns out to be the devil's own bargain.

After succumbing to Gabriel's skilled and sensuous persuasion, Pandora agrees to become his bride. But soon she discovers that her entrepreneurial endeavors have accidentally involved her in a dangerous conspiracy-and only her husband can keep her safe. As Gabriel protects her from their unknown adversaries, they realize their devil's bargain may just turn out to be a match made in heaven . . .

The first book in Kleypas’ new series was ‘Cold-Hearted Rake’ which came out in 2015 – and actually, I attempted to read it but DNF’ed after about four chapters. I don’t know why, but I could not get into it – there was none of the effervescent reading comfort I normally get from a Kleypas historical, which was disappointing. I was resigned to just sitting this series out, and patiently waiting for Kleypas to move onto her next series – whatever it may be. And then she made an announcement about who would be in the third book …

Ask pretty much any Lisa Kleypas fan, and they’ll tell you that one of their all time favourite couples she’s written in Evie and Sebastian from the third book the ‘Wallflowers’ series, ‘Devil in Winter’. Sebastian was a notorious rake who had done some pretty questionable things in the past … Evie was a red-headed innocent, with a stutter and new inheritance that made her an easy target for greedy relatives – their coming together involved Evie propositioning Sebastian to become her husband and help protect her wealth and independence – what neither of them bargained on was falling madly in love in the process. It is one of the hands-down best historical romance books and pairings in the genre. Hands. Down! So when Kleypas announced that the third book in her Ravenels series would focus on Evie and Sebastian’s son Gabriel Lord St. Vincent … well, I had to come onboard.

First off – I was able to read ‘Devil in Spring’ as a stand-alone, knowing nothing of what had previously happened in the first two books. Anyone who is not familiar with Evie and Sebastian’s story could likewise come into ‘Devil in Spring’ cold.

Gabriel is much like his father was – though rather than bedding numerous women, Gabriel’s notorious for having kept an inappropriate mistress for the last two years (a woman married to the American ambassador). He is a most tempting bachelor from a prosperous family, but with no intentions of ever getting caught in a marriage trap by a young miss … except that’s exactly what happens. Only, it’s Lady Pandora Ravenel who is quite literally caught in a settee and needs Gabriel’s help to get loose – and unfortunately when they’re caught in a compromising (but innocent) position, Gabriel is impressed upon to “do the right thing” and marry Pandora.

The only person who wants to be married less than Gabriel is Pandora – because she has plans for herself, and a business to run. And actually, I loved this aspect of the story – not only does Kleypas go into meticulously fascinating detail about women’s rights in this era (wherein even the Queen has spoken out against suffrage and suggested feminists should be whipped!) but Pandora’s business enterprise in the burgeoning board-game industry is modelled on real-life game designer Elizabeth Magie, whose patent for ‘The Landlord’s Game’ was considered direct inspiration for Monopoly (of course, a man called Charles Darrow basically stole her idea and for a long time her contributions were erased. *HUFF*!)

Gabriel is infinitely intrigued by the fact that Pandora wants to marry him about as much as she wants a salad fork in her eye – but the two agree to see if it’s worthwhile dodging ruinous rumours by having Pandora and her family stay with Gabriel’s tribe at his family’s estate.

“I’ll be nice as nice can be,” Pandora said. “But don’t you remember what happened at Eversby Priory, when a goose built her nest in the swans’ territory? She thought she was enough like them that they wouldn’t mind her. Only her neck was too short, and her legs were too long, and she didn’t have the right sort of feathers, so the swans kept attacking and chasing the poor thing until finally she was driven off.”

Pandora is most definitely a throwback to Kleypas’s archetype ‘Wallflowers’ heroines – the shy but brilliant young lady with quirks and secrets. Her background is both tragic and admirable, and it’s easy to see why Gabriel is fascinated enough to warrant getting to know her better, only to fall in love with her …

And Gabriel takes after his father as one of Kleypas’s better rakes. He’s thoughtful and kind, secretly feeling the pressure of his family and title and in need of someone like Pandora to keep him on his toes.

I will say that in the latter half of the book a political undercurrent comes into the plot which feels like it’s setting up for the fourth instalment (in which case, I’d come back for it!) but in Pandora and Gabriel’s story it felt a little disjointed. But that’s my only complaint in an otherwise stellar historical romance outing.

I may now go back and read books 1 and 2 in ‘The Ravenels’, but more likely I’ll just keep moving forward from this point on. It does feel really, really good to be back in the reading groove with Kleypas, who is one of those authors I come to rely on for a once-a-year release and guaranteed good read. And ‘Devil in Spring’ was a good way to get back in the groove.