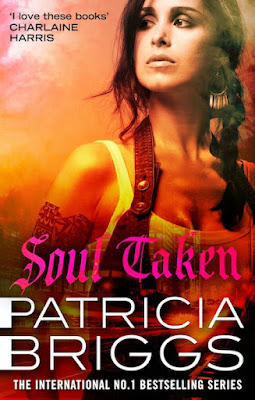 The vampire Wulfe is missing. Since he's deadly, possibly insane, and his current idea of "fun" is stalking Mercy, some may see it as no great loss. But when he disappears, the Tri-Cities pack is blamed. The mistress of the vampire seethe informs Mercy that the pack must produce Wulfe to prove their innocence, or the loose alliance between the local vampires and werewolves is over.So Mercy goes out to find her stalker - and discovers more than just Wulfe have disappeared. Someone is taking people from locked rooms, from the aisles of stores, and even from crowded parties. And these are not just ordinary people but supernatural beings. Until Wulfe vanished, all of them were powerless loners, many of whom quietly moved to the Tri-Cities in the hope that the safety promised by Mercy and Adam's pack would extend to them as well.Who is taking them? As Mercy investigates, she learns of the legend of the Harvester, who travels by less-trodden paths and reaps the souls that are ripe with a great black scythe . . .

'Soul Taken' is the 13th book in Patricia Briggs' urban fantasy 'Mercy Thompson' series (which was recently optioned by Amazon Prime!)So this book literally picks up where we last left off, following the events of 'Smoke Bitten' and what went down with the witch Elizaveta ... it also ties together the most recent instalments concerning a kidnapping to Italy, new treaties with the Gray Lords and Underhill, and Mercy & Adam's Columbia Basin Pack breaking with the Marrok to form their own little national of werewolves.'Soul Taken' actually goes pretty intense into the most recent backstory, and while Briggs does helpfully fill out the background and provide a refresher on context, it is still *quite* overwhelming and I was just never sure where to look in this plot. Are ... are we meant to be focusing on the Gray Lords treaties? Is the break with the Marrok the thing here? Is it the uneasy alliances between wolves, goblins, witches, and vampires - oh my! And here's the thing; it's kinda ALL OF IT. Which is slightly chaotic messy overwhelming to read. It's also a little hard to follow because a lot of those involve machinations of diplomacy and there's a lot of ~talking~ and planning and thinking. Not necessarily a whole lot of action.I will say; there's a really interesting development with the new werewolf Sherwood. This seems promising. Dare I say; I would potentially even like a novella, short-story or spin-off for Sherwood? Maybe in the same way we got Charles & Anna in 'Alpha & Omega'? At various times in this series I've been desperate for an Asil spin-off, and before his disappointing mate Ariana came on the scene (I'm SORRY, but that was a cop-out of a plot-point) I'd hoped for Samuel to get his own story-focus too. I wonder if Sherwood could fill that hole I have to further explore the werewolf world? I'd be down for it, 100%! Especially if he got some sort of HEA out of it.Speaking of Samuel; something was established in the last 'Alpha & Omega' book 'Wild Sign' that I said would probably crossover into Mercy's world ... and it looks like it *might* but not in an overly big way. HOWEVER: the mention of it in 'Soul Taken' suggests it'll be the focus of Anna & Charles's next book. Keen!Final thoughts on 'Soul Taken' are ... I like that we're seeing Adam & Mercy as a strong unit. And actually, this book reminds us that the Columbia Basin Pack are as strong as they are, as independent as they are, because Mercy has always had ties and been willing to treatise and compromise with all supernatural (from fae to vampires, humans and anyone in-between) we're now seeing the wider implications and benefits of that playing out within the politics of this world. And it just goes to show how much reach Mercy has had, and how much Adam benefited from it - is better because of it, and her. It's really nice and a surprisingly lovely way to get a bird's eye view of this series that's been going since 2006(!!!!!)Adam & Mercy remain the absolute best, and I always love coming back to them in their books. Fingers-crossed for a TV series! I also can't wait for Anna & Charles' new book, but Adam & Mercy still just .... hit the right spot!

Posted by Danielle at 8:43 AM No comments: