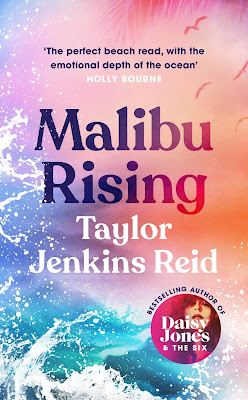 A lifetime holding it together.

One party will bring it crashing down.

Malibu: August, 1983. It's the day of Nina Riva's annual end-of-summer party, and anticipation is at a fever pitch. Everyone wants to be around the famous Rivas: Nina, the talented surfer and supermodel; brothers Jay and Hud, one a championship surfer, the other a renowned photographer; and their adored baby sister, Kit. Together, the siblings are a source of fascination in Malibu and the world over-especially as the offspring of the legendary singer, Mick Riva.

By midnight the party will be completely out of control. By morning, the Riva mansion will have gone up in flames.

But before that first spark in the early hours before dawn, the alcohol will flow, the music will play, and the loves and secrets that shaped this family's generations will all come bubbling to the surface.

‘Malibu Rising’ is the new book by American author Taylor Jenkins Reid, her seventh novel and the third in what is a loose “Cinematic Universe” of a part-fictionalised timeline of American fame … her first foray into alternate-Hollywood was 2017’s ‘The Seven Husbands of Evelyn Hugo’ which is where readers first fleetingly met Dean Martin-style crooner, Mick Riva – whose four abandoned children are the protagonists of ‘Malibu Rising’.

I’m not 100% sure if Jenkins Reid’s big breakout success, the 2019 novel ‘Daisy Jones & The Six’ (which looked at an alternate 1970s American music-scene, written as an oral history of one band) has character cameos feature in ‘Malibu Rising’ too … making this the third book in a loose Taylor Jenkins Reid Cinematic Universe? But I wouldn’t be surprised. In ‘Evelyn Hugo’, Jenkins Reid gave us 1960s Golden Age glamour of a claustrophobic Hollywood, ‘Daisy Jones’ was all about the love revolution of the 70s music-scene, and ‘Malibu Rising’ spins around the technicolour 80s – making a pretty neat trilogy of fame, fortune, and how fleeting it all is.

‘Malibu’ spins around one night in 1983 that is about to become infamous – at the annual party of Nina Riva, the oldest daughter of American singing sensation Mick Riva. By the end of the night her house will have burned down, and multiple celebrities will be arrested for various hedonistic acts – the book takes us through the hour-by-hour play-by-play of the day and introduces us to Nina and her three siblings.

There’s Jay – the eldest son of Mick Riva and a surfing sensation whose star is on the rise. Next there’s Hud – a few months younger than Jay – a talented photographer whose romantic optimism may be about to get the better of him. And youngest sibling is Katherine ‘Kit’ who has never been kissed and is determined to not examine too closely why that is, and also correct the situation at her sister’s big party this year.

Then there’s Nina herself – a talented surfer who has found uncomfortable fame via a modelling career she’s embarrassed by, but needed in order to pull herself and her siblings out of near-poverty following the death of their mother and abandonment by their famous father. As a teenager, Nina became the head of her family and surrogate parent to all three of her siblings – and she now finds it hard to shake loose the shackles of responsibility, and finally examine what a lifetime of placating and keeping her head above water has done to her.

Amidst all this is the flashback unfolding romance of Mick Riva and their mother, June – a slow-moving car-crash we read unfold alongside another inevitable blaze burning across Malibu …

Jenkins Reid in her other two books in this loose universe, has kept the children of famous people pretty firmly on the sidelines. They’ve quite literally been passive observers to the tale of their famous family, bit-players on the stage of someone else’s life. So it’s really interesting that Jenkins Reid has decided to take a secondary side-character from ‘Evelyn Hugo’, and give his kids the limelight … to tell a story of being on the periphery, the discarded backstory of someone else’s biography. Mick Riva is clearly a throwback to Desi Arnaz, crossed with Eddie Fisher, with the croonability of Dean Martin – and it’s the Eddie Fisher feel of the character that I found most interesting (he had five wives, was in a messy love triangle with himself, Debbie Reynolds and Elizabeth Taylor) and that’s because of his most famous child, Carrie Fisher.

Look, none of the Riva children are facing down the same mental and substance abuse battles that Carrie Fisher was (though there is an observation of alcoholism in the Riva family) – but there’s something about Carrie writing her semi-autobiographical Postcards from the Edge in 1987, the same time-period that Jenkins Reid has also thrown the Riva children into, to come into their own and reconcile with their larger-than-life and absent father, that is delicious in its crossover.

I really do love that Taylor Jenkins Reid is treating American fame as their modern mythology. This is something that I think she owes a lot Ryan Murphy who started playing with this idea of showing Americans their true modern genesis when he made American Crime Story and the first season ‘The People v. O. J. Simpson,’ in which he really posited that this was an impactive cultural moment for a whole generation, and one that largely shaped the future (this was an early version of modern reality-TV, from the car-chase to the courtroom; and Murphy hammered this home by alluding to the Kardashian family being hugely influenced by these events.) I do think Jenkins Reid has tapped into this observation beautifully – and many more have since followed; from ‘The Marvelous Mrs. Maisel’ giving us an imagined female stand-up trailblazer (and now Jean Smart is showing us that progression and stagnation in ‘Hacks’), to David Fincher bringing us the true-story of ‘Mank’ and retroactively looking at the making of ‘Citizen Kane’ (commentary-within-commentary about the blurred lines of politics and Hollywood).

This is also to say – Jenkins Reid has never written about the lives of imaginary famous people, their trials and tribulations, to say “woe is me” about their too-tight glass slippers. She spins these stories of fame and fortune to make bigger commentary. ‘Evelyn Hugo’ was brushing up alongside the commodification of women and femininity, touched on abuse against women within Hollywood – but more broadly; was revealing the queer history within Hollywood, and the ways it was kept hidden so as to project and protect a desire for heteronormative, nuclear family political aspirations to the general public. ‘Daisy Jones’ was a lot about the creative process, and what happens when a woman dares to not be cast as the ~muse~ but puts herself, her desires, front and centre in her art. Similarly, ‘Malibu Rising’ isn’t just about a dead-beat Dad flaming out on his family – rather, it’s about how much is just surface-level illusion. Mick Riva may be able to sing pretty, but he’s left a trail of destruction in his life. The Riva kids were able to bandage and paper-over their crumbling home-life after the death of their mother so as to go under the radar of social-services. And all of them as adults may be starting to look like success-stories; but it’s mostly just another façade, and what’s front-facing is not what is making them happy. These larger themes all have tendrils in today; whether it’s the #MeToo movement or living in a social-media age and the lies that brings … Jenkins Reid knows very well throughout all these books, that fame is just a distortion and amplification of reality. And if she has any over-riding message in all her works it’s to tell readers not to be fooled into worshipping False Gods. No matter how pretty and alluring their lives and exteriors may be.

I really enjoyed ‘Malibu Rising’ – and I’m thrilled to learn that it’s been optioned for a TV series (even as I’m a little iffy on how that’ll work … I would have thought it was a slam-dunk for a movie adaptation?) and all I know for sure is that I’d love to see George Clooney cast as Mick Riva! Please! Make it meta by head-nodding to George’s old playboy persona in the media!

I also think it’d be cool, since many real and imagined 80s celebrities are name-dropped (Jennifer Beals! Goldie Hawn! Rob Lowe!) and Nina as a model, reminds me of a cross between Brooke Shields and Cindy Crawford … so how cool if they played with the kids of those celebrities to appear in an adaptation? Pop Crawford’s daughter Kaia Gerber in there! Have Kate Hudson playing her mum! Go wild with tongue-in-cheek nostalgia!

All in all though; this isn’t my favourite of Taylor Jenkins Reid’s book (it’s still ‘Evelyn’ for me, and always). I also think the ending was a little rushed and didn’t quite land the same way that the heart-in-throat revelations in ‘Evelyn’ and ‘Daisy’ hit? I also wondered if there was a dropped-thread toward the end; when much is made of Mick Riva not indicating as he turns into a driveway, just as a secondary character is also heading home in their car … I was expecting a crash; but maybe that was just a red-herring rather than an editorial hole? Maybe another reason this wasn’t as big a WOW book for me is that I do want more. Particularly youngest sister Kit’s story, which really felt like it was just getting started by book’s end and now I want more!