'The No-Show' by Beth O'Leary 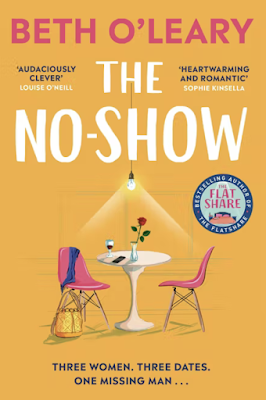 8.52 a.m. Siobhan is looking forward to her breakfast date with Joseph. She was surprised when he suggested it - she normally sees him late at night in her hotel room. Breakfast on Valentine's Day surely means something ... so where is he?

2.43 p.m. Miranda's hoping that a Valentine's Day lunch with Carter will be the perfect way to celebrate her new job. It's a fresh start and a sign that her life is falling into place: she's been dating Carter for five months now and things are getting serious. But why hasn't he shown up?

6.30 p.m. Joseph Carter agreed to be Jane's fake boyfriend at an engagement party. They've not known each other long but their friendship is fast becoming the brightest part of her new life in Winchester. Joseph promised to save Jane tonight. But he's not here...

Meet Joseph Carter. That is, if you can find him.

‘The No-Show’ is the new and fourth stand-alone novel from UK-author, Beth O'Leary.

Since the release of her bestselling, break-out debut novel ‘The Flatshare’ in 2019, Beth O'Leary has released one-book-a-year. Which is no easy feat, and very savvy marketing to her primarily romance-reading audience who are more used to that fast turn-around in their favourite genre. I will say that nothing O’Leary has written since quite reaches the giddy heights of ‘The Flatshare’ for me – but to be fair, that was a remarkably clever concept executed beautifully and I’m also not surprised that it’s the one of her books currently in-production as a six-part series (I do believe ‘The Switch’ has also been optioned, but is not yet filming.) So all of this is to say … I didn’t love ‘The No-Show’ as much as ‘The Flatshare,’ but also take that with a grain of salt because it was her first and (in my opinion) strongest.

The thing with Beth O’Leary books now also, is that in ‘The Flatshare’ she established a ‘trick’ to the narrative. Admittedly it’s one that readers were “in” on from the get-go (that her two protagonists – destined to be love-interests – were renting a flat together, but due to their work-schedules hadn’t actually encountered each other face-to-face, and the ‘trick’ was the build-up to that moment.) So that’s what Beth O’Leary established as a kind of subversive slice of romantic trope playing and something of a ‘trick’ has been present in all her books since (I say ‘trick’ to avoid ‘gimmick,’ which doesn’t seem at all fair). To varying degrees and magic. It’s the same in ‘The No-Show’ and if you (like me) pick up on ‘the trick’ pretty early on (I blame being a devotee of ‘This is Us’ TV series) then it won’t wreck the story for you by any means, but you may feel yourself getting slightly fed-up with the build-up.

The premise being; three different women, stood-up for a Valentine’s Day date by the same guy. One of these women is Joseph Carter’s London hook-up (Siobhan), one is his committed girlfriend (Miranda) and one is just a friend (Jane). The story switches between each POV of these women as they navigate their increasingly tricky relationships with Carter. And herein lies one slight problem that’s quite usual when you get multi-person POV books … I really only liked, and was interested in, one of these women’s stories. Miranda.

Miranda is an arboriculturists (or, ‘tree lopper’) – she climbs into a harness and climbs trees to lop off branches for a living. She’s very cool, and has just started a steady job with a new tree-lopping crew. She’s also been in a relationship with Joseph Carter for a few months now, and is happy, even if she often feels like Carter is compartmentalising parts of himself and she doesn’t really know him … When Miranda starts her new job; she also encounters ladies-man and tattooed lumberjack-type, AJ, who makes very clear early on that he’s taken a fancy to Miranda.

Now – I far preferred Miranda’s chapters to Siobhan and Jane’s. So much more. Partly because I imagined her as Rose Matafeo because Rose Matafeo was in this great New Zealand rom-com movie called ‘Baby Done’ about a tree-lopper who is so good at her job that she also competes in tree-lopping at a professional level, but her future is derailed when she falls pregnant and suddenly her and her devoted partner (Matthew Lewis, otherwise known as Neville Longbottom!) have to make very grown-up life decisions, and it’s just great. But from the moment that Miranda locks eyes with AJ on the page, I was way more invested – these two have *chemistry* and each time I had to be waylaid by Siobhan and Jane’s chapters and taken away from what was building between Miranda and AJ, I got frustrated. Now – could Miranda’s story have maintained an entire book? Unlikely. While reading, would I have liked Beth O’Leary to try? Absolutely.

Like I said – it’s just an oft-encountered problem when you write multi-person POV books that readers will want to spend the most time with one in particular, but have to share page-time with others.

So between that and guessing the ‘trick’ probably too early, this book just stumbled a couple times for me, personally. Very much about my taste and where my head was at when reading. I did also realise that Beth O’Leary’s romance writing isn’t quite on-par with favourite author Mhairi McFarlane for me, I actually think O’Leary is more up there alongside Jojo Moyes. Take away the fact that Moyes mostly writes historical-fiction; I posit that she and Beth O’Leary both similarly write ‘tricks’ in their romantic fiction, and they both tend to prefer the sweet-bitter stuff.

All up … I enjoyed my time with ‘The No-Show’ especially because I do love Beth O’Leary’s world-building and writing generally. Miranda and AJ were MVP’s for me however, and given that that was only one-third of the story meant this was an unbalanced read for me. But still good. Just not as good as ‘The Flatshare.’

Posted by Danielle at 8:15 AM No comments: