‘The Place on Dalhousie’ by Melina Marchetta 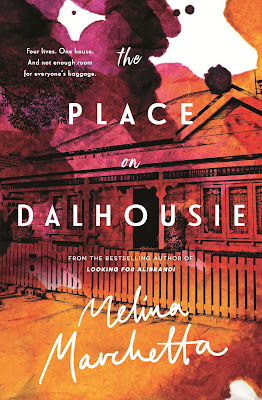 Receive from the Publisher

'You look the type to break your father’s heart.'
'Yeah, but he broke mine first.’

When Rosie Gennaro first meets Jimmy Hailler, she has walked away from life in Sydney, leaving behind the place on Dalhousie that her father, Seb, painstakingly rebuilt for his family but never saw completed. Two years later, Rosie returns to the house and living there is Martha, whom Seb Gennaro married less than a year after the death of Rosie’s mother. Martha is struggling to fulfil Seb’s dream, while Rosie is coming to terms with new responsibilities. And so begins a stand-off between two women who refuse to move out of the home they both lay claim to.

As the battle lines are drawn, Jimmy Hailler re-enters Rosie’s life. Having always watched other families from the perimeters, he’s now grappling, heartbreakingly, with forming one of his own . . .

An unforgettable story about losing love and finding love; about the interconnectedness of lives and the true nature of belonging, from one of our most acclaimed writers.

‘The Place on Dalhousie’ is the new contemporary fiction novel from Australian author Melina Marchetta. It can be read as a sequel-of-sorts, to where many of the characters within first appeared; in Saving Francesca as teenagers in 2003, and then again in 2010 with The Piper’s Son as young adults. But Dalhousie can also be read and enjoyed as a stand-alone for newcomers to Marchetta’s writing.

Avid readers though, will also be pleased to learn that two teasing shorts Melina wrote in the lead-up to this story being told, do appear within; ‘When Rosie Met Jim’ from Review of Australian Fiction, and ‘The Centre’ from the Just Between Us anthology.

But first – a bit of background on the momentousness of this release.

Since Francesca came out in 2003, one name has haunted and delighted devout fans of Melina Marchetta’s books – Jimmy Hailler. He was the weird boy that Francesca Spinelli’s disparate friends and broken family collected and gathered close during the events of that book. He is a character that Melina has spoken lovingly about at book events, as being inspired by the students she met during her teaching at an all-boys school. In the beginning of Saving Francesca there appeared to be something a bit “off” about Jimmy – like maybe he was just the bully, one to steer away from. But over the course of that story his decency shone through; he was still quirky and with a lonely broken family, but it became apparent that he was fiercely loyal and caring too.

Jimmy’s absence from 2010 follow-up book The Piper’s Son was deeply felt – not just by the characters, but the readers too – as it’s revealed after some loss and heartbreak again in his life, Jimmy had taken off to God knows where during the events of that book … in the interim after The Piper’s Son and every time I attended a Melina event, or read an interview with her – the question of Jimmy would inevitably come up. Much like his friends Frankie, Tara, Tom, Justine, Siobhan and their collective families – readers were worried about him, and wanted to know if he was okay. More importantly – they wanted to know if Melina would ever write his story (which is the same thing, in a way.)

Much as there’s always been something innately lonely about Jimmy, he struck me as a character who best thrived from contact and the collective – so it didn’t surprise me in the least, when I first learned that when she told it, Jimmy’s story wouldn’t be his alone … rather The Place on Dalhousie is Jimmy’s story, and that of the girl that disaster and chance place into his life, as well as that girl’s stepmother whom she has a fraught relationship with.

Jimmy seemed to shine brightest when he was surrounded, nurtured, and uplifted by the women in his life – Mia Spinelli, Frankie, Tara, Justine, and Siobhan – so it feels utterly right and natural that in Dalhousie we get three points of view of not only Jimmy, but Rosie (the girl) and her stepmother (Martha) too.

Jimmy and Rosie meet in a Queensland flood in 2010, and then have to reconnect 15-months later in Sydney, when Rosie moves back into her childhood home. The home that her father, Seb, built for her and her mother Loredana – who died of cancer when Rosie was 15, and before the house was finished. Seb married Martha 11 months after her mother died, and Rosie never forgave him – not really – and not even after he died just before she turned 18.

What Jimmy walks into is a house divided – literally – and about to be finished for the first time since Seb conceived it. Rosie is living upstairs, Martha downstairs at Dalhousie Street, neither of them willing to give ground or back down – Martha wants to sell the place and split the money with Rosie, Rosie just wants Martha gone.

And this is the fraught setting of the story – at the heart of a family. It’s a book of divisions; not just of the upstairs/downstairs nature of co-existing within the setting, but of divisions within themselves and who they want to be … which sometimes means leaving behind who they were.

And that’s all I’ll say on the story.

I started reading these books when I was 16 – the year Saving Francesca came out. And then when The Piper’s Son released, I was 23. I’m 31 this year, and I continue to be gratefully shocked at the timing of Marchetta’s release for these books and characters, who I’m glad seem to follow me to milestones as they live their fictional own. The Place on Dalhousie slotted into my heart as easily as those first two books, and without giving too much away I’ll only say that … Jimmy’s okay. And that’s all I wanted from this story – but I got it, and so much more.

Melina’s characters have started echoing for me, and I was so glad for those ripples in Dalhousie. It’s not repetition, but foundation that I appreciate – this realisation that one has to come before the other for a story to begin. I felt that about Tell the Truth, Shame the Devil; that read to me like a companion to The Piper's Son. And it’s never more clear to me than in Dalhousie – at the way Melina has written another fiercely complex and messy young woman in Rosie, who I think would get along smashingly with Taylor Markham from On The Jellicoe Road, Quintana of Charyn from The Lumatere Chronicles and Violette Zidane from Tell the Truth. I can think of no higher praise for Melina, than saying that she writes young female characters who don’t give a shit if you like them or not – they’ve been through enough in their life, and trying to be “likeable” and “nice” is low on their list of priorities, and not nearly as important as learning to trust themselves and who to let into their complicated lives. Their flaws make these characters more interesting – not less likeable. Melina makes you work to really know these women, and to love them – but once you do, there’s no going back (as true for readers as other characters).

I could say that Martha reminds me of Georgie from The Piper’s Son – only because Melina continues to write women of a certain age who are otherwise forgotten in fiction (be it books, TV or film) – she continues to give them interesting high-stakes when society tells them they’re out of the game, and never more than in matters of the heart (Georgie and Sam from Piper’s and Trevanion and Beatriss from Lumatere are among my favourite romances of any book – but go back and read any Melina Marchetta novel and see how effortlessly she weaves interesting intergenerational stories for women of all ages.) I especially got goosebumps when Melina touches on this erasure of older women in the form of back-story for Rosie’s Sicilian grandmother, Eugenia. But actually, something of Martha reminds me of Frankie; in the way they are both the hub for their friends and family, maybe without always meaning to be.

And Jimmy. I have long thought that Jimmy’s fictional familiar was Froi, from The Lumatere Chronicles – and for so long I thought it was their tragedies that echoed for me. But something clicked with Dalhousie, and a line that Froi says in Quintana of Charyn, when he tells another character;

‘One day,’ Froi said, clearing his voice of emotion, ‘I’ll introduce you to my queen and my king and my captain; and Lord August and Lady Abian, who have given me a home; and the Priestking and Perri and Tesadora and my friend Lucian; and then you’ll understand that I would never have met them if you hadn’t journeyed to Sarnak all those years ago, Arjuro. And if the gods were to give me a choice between living a better life, having not met them, or a wretched life with the slightest chance of crossing their path, then I'd pick the wretched life over and over again.’

Ah, that’s Jimmy. That’s his story; ‘And if the gods were to give me a choice between living a better life, having not met them, or a wretched life with the slightest chance of crossing their path, then I'd pick the wretched life over and over again.’

He’s the character who’s had the toughest life of all his friends. He’s the one that we’ve all worried about the most, have waited for Melina to tell us that he’s okay.

But that’s the thing – he would choose the wretched life over and over again, because it lead him here. To Rosie, and Martha. Back to his friends in Sydney (yes, all of them) coming together again like they did when they first started collecting each other in school. And that wretched life leads him to this house and a life, on Dalhousie.

I thought I pitied Jimmy for the longest time, but here I see my true affection for him – for all these characters, really – lies in accepting the good with the bad. Their flaws and imperfections made them real to me, and I love them more for it. And I am going to miss them so terribly, if this book really is the end.

But I do leave them here I think, somewhere in Leichhardt (or Stuttgart, London, a little town in Queensland, walking around Haberfield, about to board a train at Central…) being messy and carrying on their lives – making mistakes and seeing them through, being happy and sad but always together, even when they’re apart.

These characters really do feel like friends, probably because they helped in introducing me to so many in real life (those of us who have grown up around Melina’s stories, and found each other because of them).

My God I am going to miss them, but I cannot thank the universe enough that they crossed my path … 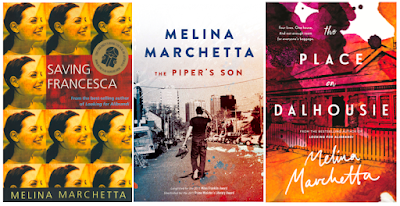 Posted by Danielle at 9:00 AM No comments: