'The Bodyguard' by Katherine Center 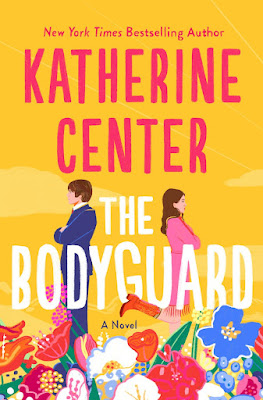 She’s got his back.Hannah Brooks looks more like a kindergarten teacher than somebody who could kill you with a wine bottle opener. Or a ballpoint pen. Or a dinner napkin. But the truth is, she’s an Executive Protection Agent (aka "bodyguard"), and she just got hired to protect superstar actor Jack Stapleton from his middle-aged, corgi-breeding stalker.He’s got her heart.Jack Stapleton’s a household name—captured by paparazzi on beaches the world over, famous for, among other things, rising out of the waves in all manner of clingy board shorts and glistening like a Roman deity. But a few years back, in the wake of a family tragedy, he dropped from the public eye and went off the grid.They’ve got a secret.When Jack’s mom gets sick, he comes home to the family’s Texas ranch to help out. Only one catch: He doesn’t want his family to know about his stalker. Or the bodyguard thing. And so Hannah—against her will and her better judgment—finds herself pretending to be Jack’s girlfriend as a cover. Even though her ex, like a jerk, says no one will believe it.What could possibly go wrong???Hannah hardly believes it, herself. But the more time she spends with Jack, the more real it all starts to seem. And there lies the heartbreak. Because it’s easy for Hannah to protect Jack. But protecting her own, long-neglected heart? That’s the hardest thing she’s ever done.

We follow Executive Protection Agent (aka "bodyguard") Hannah Brooks as she experiences among the worst months of her life - her mother dies after a long battle with alcoholism, her boyfriend dumps her the day after the funeral, and her work-life is on the line as she's up for a big promotion that all of these personal hurdles could get in the way of. And Hannah is someone who very much prioritises work-life over home-life, and is in a real tail-spin as all of that is upended.

Her one chance to redeem herself comes with a new job-offer that her boss, Glenn, assigns her to. But it's not the international jaunt she was hoping for; rather it's a home-base Texas job for international movie-star heartthrob, Jack Stapleton, who apparently has a corgi-breeding stalker on his tail right when he's trying to return home and be with his family as his Mum receives cancer-treatment. Also because it's a delicate home-life situation, part of Hannah's job will be to pose as Jack's girlfriend ... so as not to alarm the family.

This was great, and I really enjoyed it and appreciated that Center in an author's note at the back says she wrote this in the thick of Covid pandemic and lockdowns, so she reached for the fluffiest and swooniest of stories to occupy her mind. And this is very much that! It's fun, flirty, carefree. Not a hard-hitter like some of Center's other books have been (my personal favourite that I think tugs on heart-strings as well as keeps heart fluttering is 'Things You Save in a Fire' but I am also a huge fan of 'Happiness for Beginners').

'The Bodyguard' (despite the Costner/Houston title!) reminds me strongly of Mhairi McFarlane's 'Who's That Girl?', with a dash of new book 'Funny You Should' by Elissa Sussman, and 'The View Was Exhausting' by Mikaella Clements and Onjuli Datta. All in that famous-person dates an ordinary rom-com niche (very 'Notting Hill'!) and Center does it very well!

Does it get *slightly* ridiculous with the high-hilarity and unlikely situations? Yeah, sure. The final half especially felt tonally "off" in a way I think is hard to explain, and I just don't think she quite nailed the dénouement. I also keep wanting Center to write like .5% more spice. Not full-blown, still 'cut-away-to-the-curtains,' but just a *pinch* more paprika to bring her in line with a Beth O'Leary or Mhairi.

But those are niggling little thoughts I had, and also that this wasn't my favourite of Center's books ... it's very much low of the middle for me, in rankings. But I think plenty of readers will have LOTS of fun with this one!

Posted by Danielle at 1:42 PM No comments: