'First & Then' by Emma Mills 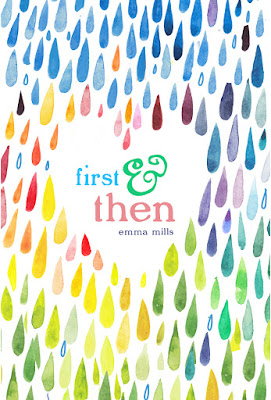 Devon Tennyson wouldn't change a thing. She's happy watching Friday night games from the bleachers, silently crushing on best friend Cas, and blissfully ignoring the future after high school. But the universe has other plans. It delivers Devon's cousin Foster, an unrepentant social outlier with a surprising talent for football, and the obnoxiously superior and maddeningly attractive star running back, Ezra, right where she doesn't want them - first into her P.E. class and then into every other aspect of her life.

Pride and Prejudice meets Friday Night Lights in this novel, a contemporary YA romance about love—for the unexpected boy, for a new brother, and for yourself. First & Then comes from Emma Mills, the YouTube vlogger and co-creator of the popular "life skills" channel, "How to Adult" which currently has over 160,000 subscribers.

‘First & Then’ was the 2016 debut young adult contemporary by Emma Mills.

I’m really loving Emma Mills’ young adult stories – and I think a big reason that they work for me is her embracing and amplifying of relatable and ordinary teen stories.

‘First & Then’ follows senior Devon Tennyson soon after her cousin Foster comes to live with her family. Foster’s father died and his mother wasn’t capable of caring for him, so sent him to live with his uncle. Devon is adjusting to life with Foster, who has a very quirky way about him that’s both endearing and frustrating.

Devon is also nursing a crush on her best friend and football player, Cas – and finding herself thrown into mandatory gym class torture with her high school’s star football player and “all-America”, Ezra Lynley.

Devon’s three relationships with these boys will intersect over the course of her final year of high school, in a range of surprising and crushing ways.

I saw this on Tumblr the other day, and I snorted because it’s 100% true;

But Emma Mills is in a category of YA authors who embrace the mundanity of high school and growing up – interspersed with the pain and awesomeness of it too. Mills actually writes about her characters doing homework, attending football practice, slogging through college essay-writing and just generally being teenagers. Sometimes this is amazing, and offers up the sorts of quiet revelations readers can actually relate to – other times you wish she’d stay in the bigger moments a little longer, like house party confrontations and homecoming dramas. But overall there’s something about Emma Mills and ‘First & Then’ that reminded me a little of ‘Saving Francesca’ by Melina Marchetta, for embracing the relatable and revelatory.

This is the year of Emma Mills for me – I started by reading her second book ‘This Adventure Ends’ in January, and I’m definitely reading her forthcoming ‘Foolish Hearts’ and now I’ve read her first. I am finding that Mills’ excelling at the ordinary can sometimes be a downfall too – as in ‘This Adventure Ends’ when I realised there was no actual denouement or satisfactory rise in action, but ‘First & Then’ does a much better job of that ordinariness overall, particularly when dealing with matters of the heart.

Devon is a big Jane Austen fan, so a lot of the romance is a hark back to the tangled miscommunications that Ms Austen so enjoyed, and it serves Mills well in this book;

Nothing good ever started with listen. It was never “Listen, you just won twenty-five thousand dollars.” “Listen, I have a huge crush on you.” I think the general theory was that you had to tell the other person to listen because you were about to tell them something they didn’t want to hear. And I definitely didn’t want to hear the end of Ezra’s listen, because it was probably something along the lines of “I hope we can still be friends.”

I will say that Mills wrote a few of her secondary characters a little too well, and I was frustrated at the end when I didn’t get conclusive resolutions or revelations about their hinted-at bigger stories – Jordan and Marabelle, especially – but maybe this means she has plans for sorta-sequels down the line?

What I especially loved about Mills embracing ordinary teen life in this book was the concentration on football and “jock” players that didn’t pander to extremes or clichés. The football boys Devon is friends with are nice and ordinary, lovable, goofy, cocky, egotistical … they’re not ‘Friday Night Lights’ or ‘Varsity Blues’ or parodies of high school football Gods, and they’re not the (perhaps sometimes more realistic) teen predators and misogynistic Neanderthals – they’re just guys, and that was actually surprisingly refreshing because they felt more three-dimensional, rather than props for stories with underlining moralistic preaching.

I’m really loving Emma Mill’s style, and I am looking forward to third book ‘Foolish Hearts’. Sometimes her embracing of the ordinary is a hit (‘Frist & Then’) other times it misfired (‘This Adventure Ends’) – but either way, she sure makes the journey enjoyable.