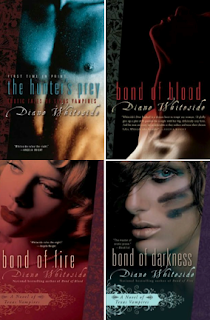 Former Spanish knight Don Raphael Perez has been a vampire for seven centuries, and is now the leader of the largest vampire territory in North America, spanning Texas and Oklahoma. But a rival is challenging his rule. Then he meets veterinarian Grania O'Malley, who's never felt the touch of a man. Raphael has sworn never to initiate a woman into the eternal pleasures of the flesh, but now it may be the only way to save her from his bloodthirsty adversary...

It is a little bit frustrating that the three books are centred on one plot – even though the resolution doesn’t come until ‘Bond of Darkness’. The characters are so vivid and wonderful; it would have been great to read about them in new situations or even how their lives changed in the future. Regardless, the plot is entertaining and suspenseful, and Madame Celeste is one of the best bad-guys. And within each book there are flashbacks and recounts of the main male protagonists life before the events leading up to the Texas coup, which keeps things fresh.