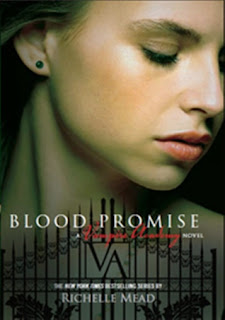 Well, that’s kind of the somber tone permeating ‘Blood Promise’. Rose has found her way to Russia and is fighting Strigoi (vampires) while also searching for her red-eyed lover. She frequently lapses into bleak moods as she traipses through Dimitri’s homeland and muses over their love affair as well as all the things now lost to them.

But in ‘Blood Promise’ Rose is setting out on such a heartbreaking, weighty task. She is going to kill the only man she has ever loved. Meanwhile, the plot occasionally veers off into teen-melodrama with Lissa’s story and it detracts and distracts from Rose’s more compelling and serious mission.

I read this book in a few hours because I could not tear myself away from the story. Richelle Mead writes fantastic action scenes that read like screenplays for the vivid direction.