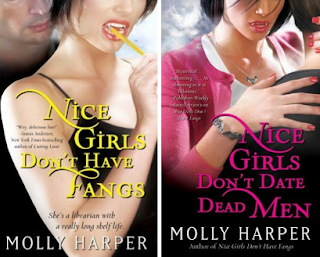 After being laid off from her job as Half Moon Hollow's children's librarian, Jane drowns her sorrows in Electric Lemonade and Mudslides using her severance package (a $25 Shenanigans gift certificate). Atthe bar she's kept company by a magnetically attractive (if a bit pale) stranger, Gabriel Nightingale - who follows her out and takes matters into his own hands when Jane's car breaks down and she's mistaken for a deer by a drunk with a rifle as she's headed home in the dark, on foot. If Gabriel doesn't turn Jane, she'll be, as the saying goes, dying young and leaving a pretty corpse. Being undead, though, is just the beginning of Jane's problems. She's still unemployed, has "family issues," a best friend who finds love with a werewolf (werewolves and vampires don't mix well); she's also being framed for murder, stalked by a former crush, and romanced by her moody sire. What's an undead girl to do?

These first 2 books in the Jane Jameson series are less plot-driven and more character-driven. We meet Jane at her lowest moment, fired from her dream job as children’s librarian. We see her worst day turn into her last, as she is killed in a freak accident and then sired by hottie vampire, Gabriel. From there the books are an examination of her adjustment to the afterlife, as she breaks the news to family and friends who take to her new vampirism with varying degrees of horror.