'Goddess of the Hunt' by Tessa DARE 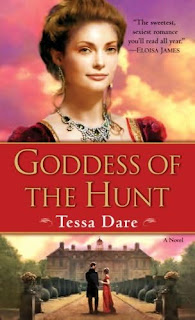 Lucy Waltham has been in love with Sir Tobias Aldridge ever since he mistook her for a pheasant and shot at her (he missed) and bowed his apology. Lucy has known Tobias, ‘Toby’, and her brother Henry’s other two friends, Felix and Jeremy, ever since she was 12 and they started journeying to Waltham Manor once a year for holidaying. But things have been changing of late. Henry married Marianne five years ago and now has three children. Felix married Kitty Hathaway, and for this years holiday Kitty bought along her beautiful younger sister Sophia Hathaway, who has managed to charm Toby right out from under Lucy’s nose. But not without a fight! Rumor has it that Toby intends to propose to Ms. Hathaway before their holiday ends, and Lucy intends to seduce Toby away from the angelic Sophia. But to do that she needs practice in the art of seduction, and book reading will only get her so far. So Lucy decides to practice her feminine wiles on Jeremy Trescott, Early of Kendall, and the frostiest man she’s ever known. If she can thaw Jeremy out, surely seducing Toby will be a snap.

I was so pleasantly surprised by this debut novel by Tessa Dare, that I am now adding Dare to my ‘must read’ list and have already ordered the next 2 books in this series from Amazon.

What was it about helplessness men found so attractive? She supposed they must enjoy the illusion of superiority. Well, Lucy did not feel the least bit helpless or inferior, and her pride rebelled against the notion of feigning either state.

The romance is steamy. What Lucy lacks in experience, she makes up for in enthusiasm - and her heated exchanges with Jeremy are sometimes funny, but definitely smoldering. There is a certain wardrobe-tryst that gave me tingles (in between my toes!) to read. Not since C.S. Lewis has a wardrobe held such fascination. There is only one 'but' and that is Jeremy's supposed rakish behavior back in London. It's not mentioned until further in the book that Jeremy has enjoyed quite a bit of female companionship in his time - but until that was explicitly stated I was sort of imagining Jeremy as a slightly more modest man. Not a monk or a virgin by any means, but I wasn't really getting the 'rake' vibe from him.