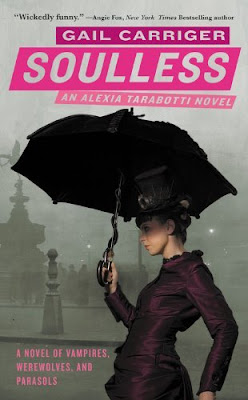 From the BLURB:
Alexia Tarabotti is laboring under a great many social tribulations. First, she has no soul. Second, she's a spinster whose father is both Italian and dead. Third, she was rudely attacked by a vampire, breaking all standards of social etiquette.
Where to go from there? From bad to worse apparently, for Alexia accidentally kills the vampire -- and then the appalling Lord Maccon (loud, messy, gorgeous, and werewolf) is sent by Queen Victoria to investigate.
With unexpected vampires appearing and expected vampires disappearing, everyone seems to believe Alexia responsible. Can she figure out what is actually happening to London's high society? Will her soulless ability to negate supernatural powers prove useful or just plain embarrassing? Finally, who is the real enemy, and do they have treacle tart?
I’m new to the whole ‘steampunk’ genre. Whenever the word ‘steampunk’ cropped up in the book blogs I read I’d just smile and nod, but secretly not have a clue what the whole movement was about. Thanks to wikipedia and google images, I was able to get some perspective – but the general consensus is that if you’re green to steampunk, Gail Carriger’s ‘Soulless’ is the perfect introduction.
Steampunk is normally set in the Victorian era, in a world where steam power is highly advanced. In the Steampunk world, fictional technological inventions favoring wood, silver and brass aesthetic populate the 'modern' world (think H.G Wells & Jules Verne).
Steampunk is normally set in an alternate universe, with a history similar to ours, but with slightly skewed timelines.
Carriger’s ‘Soulless’ is sort of the perfect introduction to Steampunk for an Urban Fantasy lover like me, because Carriger has combined the two genres.
Most Urban Fantasy is set in modern-day; vampires and werewolves ‘come out’ in the 21st century, normally because they believe societal advancements have prepared humanity for their existence. But Carriger rightly believes that if ‘supernatural’s’ have been lurking in shadows since the beginning of time, why wouldn’t they have chosen to ‘come out’ earlier? ‘Soulless’ is set in the 19th century (Steampunk 19th century) and vampires and werewolves have been public for quite some time.
Carriger has written an incredible world, populated with even more impressive protagonists and secondary characters.
Alexia is a fantastic lead. She’s a spinster at twenty-six, full of Italian vigour and biting wit. I loved her. I also loved werewolf Alpha Lord Maccon – who is entirely masculine and rough around the edges but with a good deal of charm directed Alexia’s way.
Carriger also puts the ‘steam’ in ‘steampunk’. Alexia and Maccon have chemistry that crackles from their first scene. It’s intense: starting with witty back-and-forth banter that quickly turns to romantic tension.
It is wonderful and refreshing to read about these fantastical creatures in an earlier era. Carriger has included some fascinating characters to highlight the century; such as Alexia’s foppish vampire friend, Akeldama who has a penchant for velvet, lace trimmings and speaks in italics (darling!).
Carriger’s writing reminded me of Oscar Wilde. It’s the same acerbic wit, aimed at polite society and asinine formalities:
The ill-informed masses included her own family among their ranks, a family that specialized in being both inconvenient and asinine.
My one complaint about ‘Soulless’ is Carriger’s flow of narration. Carriger occasionally flips between perspectives without an ellipsis break to clearly show whose thoughts we are reading. It only happens occasionally, but I found it a little jarring and sometimes had to re-read a line to make sure I knew whose narration I was reading.
I loved ‘Soulless’ so much. It gave me the best of all the genres I love; regency romance, Urban Fantasy with a mystery twist. It was refreshing and exciting to read about vampires and werewolves in the 19th century; wearing cravats, attending balls and blending into polite Ton society.
I also adore the book's cover art by Lauren Panepinto - it is to die for!
I have to thank Mandi at Smexy Books for first reviewing this book and putting it on my radar, but also for recently prodding me to read and review it. She did a very good job at pimping ‘Soulless’, and I for one am grateful that I took her advice.
I have an inkling that Gail Carriger will become a ‘must-read’ author for me. I will faithfully read whatever she writes, even if it’s not Steampunk or an Alexia Tarabotti book.
5/5 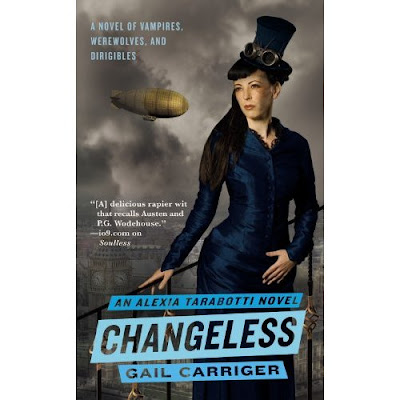