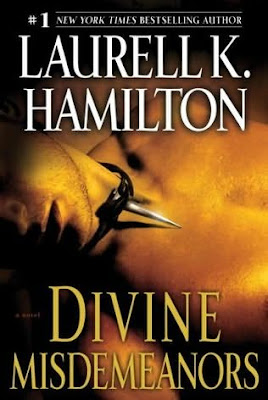 From the BLURB:
You may know me best as Meredith Nic Essus, princess of faerie. Or perhaps as Merry Gentry, Los Angeles private eye. In the fey and mortal realms alike, my life is the stuff of royal intrigue and celebrity drama. Among my own, I have confronted horrendous enemies, endured my noble kin's treachery and malevolence, and honored my duty to conceive a royal heir - all for the right to claim the throne. But I turned my back on court and crown, choosing exile in the human world - and in the arms of my beloved Frost and Darkness.

While I may have rejected the monarchy, I cannot abandon my people. Someone is killing the fey, which has left the LAPD baffled and my guardsmen and me deeply disturbed. My kind are not easily captured or killed. At least not by mortals. I must get to the bottom of these horrendous murders, even if that means going up against Gilda, the Fairy Godmother, my rival for fey loyalties in Los Angeles.

But even stranger things are happening. Mortals I once healed with magic are suddenly performing miracles, a shocking phenomenon wreaking havoc on human/faerie relations. Though I am innocent, dark suspicions of banned magical activities swirl around me.

I thought I'd left the blood and politics behind in my own turbulent realm. I had dreamed of an idyllic life in sunny L.A. with my beloved ones beside me. But it becomes time to wake up and realize that evil knows no borders, and that nobody lives forever - even if they're magical.

This is the 8th book in Laurell K Hamilton’s ‘Merry Gentry’ series.

So, I am a fan of Hamilton’s ‘Merry’ books. But to be honest I thought the series could have happily concluded with book #7, ‘Swallowing Darkness’, because a huge story ARC was wrapped up nicely. I was a little cautious going into ‘Divine Misdemeanors’ because I couldn’t really gauge where Merry’s story would go since so much was concluded in the previous book.

I was right to be wary.

‘Divine Misdemeanors’ flounders from page one. Merry is back to being a Private Detective and the opening chapter has her consulting on a crime scene. Once upon a time Laurell K. Hamilton could masterfully mesh science and crime fiction – she was at the top of the Urban Fantasy genre with her ‘Anita Blake’ series. But her ‘Merry’ books have never had the same crime/fantasy angle as ‘Anita’, so I don’t really know why Hamilton felt the need to start now in book #8. ‘Merry’ was always the series that explored politics, royal families and despotism. The crime storyline in ‘Divine’ is boring, made more so by the lack of uber-villain Queen Andais.

Queen Andais is to Merry what Belle Morte is to Anita; a seriously delicious, conniving mega-bitch. Hamilton may lag behind in plot and spout tired and trite sentences in her many sex scenes (‘I screamed my orgasm into his mouth’, ‘so tight, so wet’ etc, etc, etc) but she knows how to write a good bad-girl. Queen Andais is Merry’s aunt and reigning Queen of the Unseelie court. She is also a raving lunatic, and sado-masochist. She is an atrocious character; so evil that she’s fun to read – and her absence is keenly felt in ‘Divine Misdemeanors’.

In previous books ‘Merry Gentry’ did a good job of exploring politics through mythological creatures – observing the tyranny of autocratic leaders, and the power plays that go on behind closed doors. It made for fascinating reading. From Merry negotiating a treaty with Kurag, the Goblin King (not David Bowie, unfortunately) to playing humble before her insane aunt, Andais. But all that is missing from ‘Divine’. I really hope that Hamilton turns it all around in book #9, because the crime storyline may sometimes work in Anita’s universe, but it certainly doesn’t in Merry’s. The best part in all of ‘Divine Misdemeanors’ comes when Barinthus (Sidhe politician) gives Merry a dressing-down for refusing to step up and become Queen – that was the only high point in the entire book.

I’m not really all that surprised that the ‘plot’ of ‘Divine Misdemeanors’ was lacking. Tags for Hamilton’s books on Amazon.com are along the lines of ‘erotica without plot’. While that was more the case with her recent ‘Anita’ books, Hamilton’s ‘Merry’ series did have previously interesting plotlines (with heavy does of erotica) but in ‘Divine’ Hamilton falls into the same traps.
It’s actually pretty funny – Hamilton tries to inject her vapid sex scenes with legitimate character discussion, with hilariously bad results. While having sex with Sidhe/Goblin Kitto, he and Merry randomly get onto the topic of her alliance with the Goblin King. As though she realizes that all the sex is getting in the way of storyline, Hamilton tries to negotiate by combining the two.

“But what does all the politics have to do with the oral sex in the privacy of our own bedchamber?”
Exactly.

To be honest, I was halfway through ‘Divine Misdemeanors’ and seriously considering giving the entire series the flick from here on in. Then Hamilton pulled out one line of dialogue that gave me hope that books from here on in will become more interesting.

“Are you all going to be sitting in some rocket-powered car a century from now telling our children about me?”
From book one we’ve known that Merry is mortal (her mother was part human, while her father was Sidhe – Merry is aging at a slow rate, but she will eventually die of old age) while Merry’s men are all immortal. Merry has said in passing on several occasions how sad it is that she will one day die, while her lovers and children will go on without her. I’ve always thought it was odd that Merry has never had a little cry about this fact. She’s just fallen in love with all these Sidhe men, she’s pregnant by six of them and while pregnant with these fey twins she has the knowledge that she won’t be around to watch over them forever, while their fathers will. It’s mentioned a few times in ‘Divine Misdemeanors’ – which leads me to think this will be the focus of book #9. If so, that’s one storyline I would love to read about, so even though number 8 left me cold, I do intend to read book 9.