'How to talk to a widower' by Jonathan TROPPER 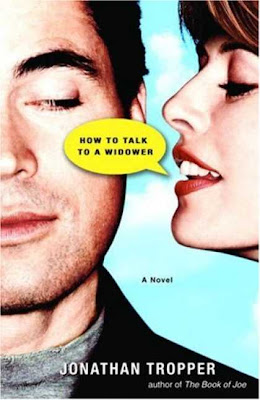 When Doug Parker married Hailey - beautiful, smart and ten years older- he left his carefree Manhattan life behind to live with her and her teenaged son, Russ, in a quiet Westchester community. Three years later, Hailey has been dead for a year, and Doug, a widower at 29, just wants to drown himself in self-pity and Jack Daniels. But his family has other ideas...

Russ is furious with Doug for not adopting him after Hailey died, and has fallen in with a bad crowd. Claire, Doug's irrepressible and pregnant twin sister, has just left her husband and moved in uninvited, determined to turn his life around.

Then there's Debbie, their younger sister, engaged to Doug's ex-best friend and maniacally determined to pull of the perfect wedding at any cost. Soon, Doug finds himself trying to forge a relationship with Russ, reconnecting with his own eccentric nuclear family, and reluctantly dipping his toes into the shark-infested waters of the second-time-around dating scene.

I love, love, loved this book!
It’s hard to put the book into a specific genre. On the one hand it’s a romantic-comedy, but with a very bleak beginning. Before Doug’s restorative journey the book deals with his dark depression following the death of his wife, Hailey. It is a sad beginning; but infused with Tropper’s laugh-out-loud humor that takes a speculative look at grief and the funny side of mourning.

Doug has to fight-off the advancements of suburban housewives in the wake of Hailey’s death – women his wife once called friends are dropping by with casseroles and offers of ‘shoulders’ to cry on. Doug talks about his questionable hygiene in the wake of his mourning and amidst his grieving – life goes on. His sister’s life is crumbling down around her, and she turns to Doug for help.
Doug also has to deal with his stepson’s escalating recklessness after Hailey’s death – and wonder at his dubious role in Russ’s life since he’s no longer really his step-father, is he?
And amidst all this, Doug’s professional life inexplicably takes off. His personal column in the paper starts to reflect the acerbic wit he’s cultivated during his mourning, and ‘How to talk to a Widower’ turns him into a smash hit.

Your heart does break to read about what Doug has lost. Tropper highlights Doug and Hailey’s romance through flashbacks and heart-wrenching narration by Doug about how much he misses the love of his life.

But ultimately Doug is a prickly character. Admittedly, we are meeting him when he’s at his worst – and because of his vulnerable, depressive state he does make some ginormous mistakes that will have you gritting your teeth at his stupidity. But it’s all a part of his healing process. He has to go there to come back, so to speak. Doug’s grief makes him a kind of ‘anti-hero’ – through flashbacks about him and Hailey we know that underneath the slovenly, sometimes jerk we first meet is a very affectionate, charming young man. But grief has changed him.

The book does have a romance at its centre, as Doug tentatively starts dating Russ’s High School guidance counselor. Their interactions leave you with butterflies in your stomach, and the relationship has a restorative quality for Doug whose real personality starts to resurface as the romance progresses;

Sometimes you walk past a pretty girl on the street and there's something beyond beauty in her face, something warm and smart and sensual and inviting, and in the three seconds you have to look at her, you actually fall in love, and in those moments, you can actually know the taste of her kiss, the feel of her skin against yours, the sound of her laugh, how she'll look at you and make you whole. And then she's gone, and in the five seconds afterwards, you mourn her loss with more sadness than you'll ever admit to.

Be warned – you will cry. But you will also laugh, loudly. Tropper walks a fine line between humour and compassion throughout the book as he explores the many facets of Doug’s grief and healing process. You will be frustrated by some of Doug’s actions, but sympathetic to his grief-addled state.

This is the second book of Tropper’s that I’ve read. The first was ‘The Book of Joe’, which I also loved. I intend to read all of his books eventually, because I think he’s fast becoming one of my favourite authors.