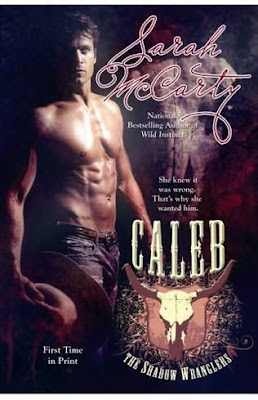 From the BLURB:
Allie always desired mysterious, sexy rancher Caleb Johnson, but he never seemed to notice her. Until the night she's attacked by a vicious animal, and rescued by a shapeshifting vampire that she almost seems to recognize: the baritone growl, the mesmerizing eyes, the inexplicable animal attraction. That's because her savior is Caleb, and now he has no choice but to bring Allie into the shadows with him - to protect her from a rival werewolf pack, and to finally reveal his true feelings for the woman he's been afraid to love.
I like vampires. I like cowboys. I thought I would like the first book in Sarah McCarty’s ‘Shadow Wranglers’ series. I didn’t.
The romance comes way too easily. Despite ranting and railing against the life Caleb has stolen from her (in order to turn her into a vampire) Allie is quickly forgiving and happy to fall into a lustful romance with him. Caleb is pretty much a cardboard cut out Alpha male – growling “mine” around Allie and threatening any male who looks at her sideways.
“Behave,” she whispered under her breath.
“I am.”
“Well, do me a favour and try not to be so eighteen sixties once we get inside. We need answers, and we’re not going to get them if you rip out the hearts of everyone we meet.”
He shrugged, the golden swirls very prevalent in his eyes. “It’s a habit.”
McCarty’s strength lies in character, but her weakness is glaringly obvious; plot. You can tell that McCarty is plopping along in storyline because she isn’t 100% sure of the trajectory. McCarty seems to know her characters’ traits, motivations, hidden desires and deepest fears, but when it comes to writing action for them McCarty falls short.
Throughout the book Allie and Caleb sit/lie around and have long discussions – sometimes these convo’s are important and reveal a little more about vampire mythology, but most of the time they just feel like senseless ‘filler’. And sometimes these lengthy talks don’t even cover the more pertinent issues. For instance, shortly after Caleb turns her into a vampire Allie is horrified thinking that her family will believe her dead and she will never see them again. Allie forgets about these grievances pretty quickly though, preferring to have orgasms with Caleb than think about the family she has lost forever. So not only is McCarty stalling with these scenes, she’s not even utilizing them properly – she just wants to write about Caleb and Allie’s ‘happy fun time’ to completely avoid more complicated plot points?
McCarty is just cooling her heels with these scenes until she can decide what the actual plot action for these characters will be.
The sex scenes also suffer from the same ‘drag out’ writing. To put it crudely, there is *WAY* too much foreplay – you can only read so much about a man sucking on a woman’s nipples while the woman writhers on the bed before you just want them to get to the main event already!
I thought that all the lead-up and stalling would culminate in a knock down drag out action finale. Not the case. In the last few chapters there is a hurried scene change, the introduction of a villain (who Allie apparently dated a few years ago, just randomly mentioned for no apparent reason) and a very clumsy fight scene. I was utterly confused in the last 60 pages or so, and it became apparent why McCarty relies so heavily on writing character development – she sucks at writing action. When you’ve read someone like Rachel Caine, whose action scenes read like screenplays, perfectly articulating combat – it becomes painfully obvious when someone like McCarty falls short. Her action scenes are confusing – weighed down because she includes Allie’s inner monologue while Caleb is fighting some sort of shadow creature (?). Bad, just bad.
The second book in ‘Shadow Wranglers’ is ‘Jared’ and comes out April 6th 2010 (being released in Kindle and paperback). I will probably read the second book – but only because McCarty seemed to have solid ideas by the end of ‘Caleb’ about the overall storyarc for the series. Hopefully her character/plot imbalance will be sorted by book #2.
I was doubly disappointed by ‘Caleb’ because the cover is so damn sexy. Damn me for judging a book by its sexy, sexy cover!
1/5
Posted by Danielle at 8:22 AM