'Requiem for the Devil' by Jeri Smith-Ready 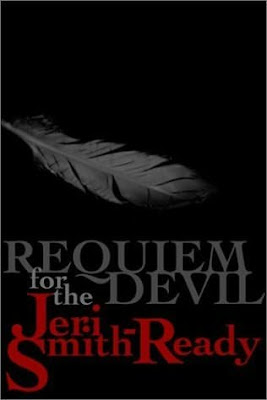 From the BLURB:
Set in modern-day Washington, D.C., REQUIEM depicts the end of the Devil's ten-billion-year career. For the first time in his existence, Lucifer falls in love, and this event threatens to transform his identity and perhaps even his destiny. Gianna O'Keefe is the woman who drags him out of his ancient despair and points him toward possible salvation.
Yet Lucifer's path from evil is neither straight nor smooth. Pursuing love means betraying his fellow fallen angels, the loyal friends who once followed him to damnation. Divine and infernal forces seem to conspire against his and Gianna's union. Lucifer's empire crumbles around him as he dares to defy the natural order and question his fate.
This is Jeri Smith-Ready’s first published work. She wrote it for the 2000 Writer’s Association Novel contest. Because I love Smith-Ready’s ‘Aspect of Crow’ and ‘WVMP’ series, I was really interested in reading her first literary foray. I’m so glad that I did.
I loved this book. It reminded me a lot of Kevin Smith’s 1999 (awesome) film ‘Dogma’ - beautifully and hilariously depicting biblical characters in the modern world. Lucifer hangs out with three demon cronies – Beelzebub, Belial and Mephistopheles. The four of them exchange witty banter that occasionally turns macabre and disturbing – but is also darkly humorous.
“Wanna go down to the Vietnam Memorial and make helicopter noises?”
But it’s not all wit and black humor. Smith-Ready actually delves into Lucifer’s relationship with his ‘Father’ – God, and explores his feelings of abandonment from the one who was supposed to be the centre of his universe.
The love story is actually quite a slow burn. You would think a story about the Devil falling in love would be all fireworks and epic diatribes about the beauty and salvation of love. But what makes this book so brilliant is that love creeps up on Lucifer the same way it does for most people. He’s not expecting it; he rebels against it, tries to deny it but eventually succumbs – slowly and thoroughly. That’s also what makes Lucifer such an intriguing character – that he is so relatable in his emotions.
And his love interest isn’t what you’d expect. Gianna isn’t a virginal beacon of purity and honesty – she is a lawyer turned lobbyist for America’s poor – but she’s actually quite cynical and jaded, spouting witty self-deprecating humor that makes her entirely endearing.
The romance is quite romantic – regardless of the fact that Lucifer is still carrying out his demonic plans while wooing Gianna, and that he has bizarre reactions to his feeling for her (like threatening to throw her into the Grand Canyon if she doesn’t admit to loving him). What makes the love story so appealing is that it’s all so completely new and shiny to Lucifer – he’s stumbling, bumbling along in the relationship with absolutely no idea about what he’s doing.
A long-sleeved velvet dress cleaved to her thin body and was a deep, delicious red that made my eyeballs feel drunk. I fought to remember who I was and to maintain an aloofness appropriate to the second most powerful being in the universe.
I wasn’t successful.
What makes ‘Requiem’ so interesting is Smith-Ready’s gradual build-up to an intense emotional conclusion. A novel about the devil falling in love could have been pretty boring, but Smith-Ready writes the story as a gradual culmination to the Devil revealing himself to the woman he loves. Lucifer struggles with his love for Gianna, especially when he feels the need to reveal himself to her and have no secrets between them. It’s an intense build-up, and Lucifer’s internal struggles and Gianna’s possible reactions to his true identity reveal ‘Requiem’ as an amazing metaphor. Lucifer as evil incarnate could be any sinister individual – murderer, pedophile, rapist – and Smith-Ready asks the uncomfortable question of whether or not he can be forgiven, rehabilitated or even loved.
I might be making ‘Requiem’ sound like seriously heavy reading. It is definitely an admirable literary work – but having read ‘Requiem’ I can see why Smith-Ready was contracted for her fantasy series ‘Aspect of Crow’ and Urban Fantasy ‘WVMP’. Smith-Ready beautifully intertwines theological debates, black witticisms, and interesting characters in the modern world. She’s funny, dark and thought provoking. Don’t assume this is a heavy read – it’s actually very funny and enjoyable, and surprisingly romantic.
I’ve heard a few people say that after reading a few duds (*cough* ‘Covet’ *cough*) they are completely turned off by the whole ‘Angel’ storyline. Well, I would highly recommend ‘Requiem for the Devil’ as a cure. Smith-Ready has written the ultimate fallen angel love story – and she’s written it with panache, dark humor and infinite tenderness for the embodiment of evil and his romantic trials and tribulations.
5/5
Posted by Danielle at 7:34 PM