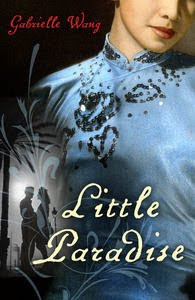 As Mirabel watched him, she could not bear the thoughts creeping up on her. JJ was in the Chinese army and his mission in Australia would one day be over. Then she would be just like the others, a girl left behind in the wake of war. 'I'm afraid,' she whispered. 'When the war ends . . . what's going to happen to us?'
He put his arm around her and stroked her face. She knew he could not answer that question. But she wanted him to lie, to say that he would take her with him, that they would be together always.
Melbourne, 1943, and Mirabel is seventeen. She's leaving school, designing dresses, falling in love. Then fate intervenes, her forbidden affair is discovered, and JJ is posted back to China where a civil war is raging. Despite all warnings, Mirabel sets off for Shanghai to find him . . .

Gabrielle Wang’s YA novel ‘Little Paradise’ is based on the true story of how her parents met.

When the book begins Lei An is changing her name. She is a third generation Chinese-Australian (her grandparents came over in the gold rush) and she wants a more Aussie name. She settles on ‘Mirabel’, and visits a soothsayer to bless the name. But the soothsayer has only ominous words to offer;

Dressing the dead
Treasure not wed
Lost on the sea
To fortune you’ll flee
The novel skips ahead to Melbourne in 1943. War hasn’t touched Australia the same way it has Europe and Asia. American soldiers have made base in the city and school children are armed with air-raid kits. But Australia is otherwise far removed from the war, although people are still on-edge after the Japanese attack on Sydney Harbour last year.
Mirabel is in her last year of school and coping with a hectic home life. Her older sister Lola is dating an American soldier, much to her parents chagrin. Mirabel’s mother is having another ‘episode’, battling the highs and lows of her emotions that force the family to send her away to a facility in the country. Mirabel has her head in her art books, but decides to join the army cartography unit once school finishes.

Then Mirabel meets Lieutenant Lin. Lieutenant Jin Jing, or ‘JJ’ as he prefers, is a liaison between Chinese and Australian forces. JJ was a peasant in Shanghai, but left the city when Japanese forces invaded, now he is in Melbourne working a special assignment for the two governments. He and Mirabel cross paths a number of times, before being officially introduced by her father and told to escort JJ around Melbourne to show him the sights. JJ is tall, strong-jawed, and respectful and the handsomest man Mirabel has even seen – she falls in love instantly. Soon she and JJ are spending every spare minute together, including a clandestine trip to Tasmania. But just as war bought them together, it also tears them apart. JJ leaves for Shanghai in the midst of political upheaval with the communist party. In 1945 peace-time brings new immigration restrictions in Australia and no way for JJ to return... not even when Mirabel sends word of her pregnancy.

I loved this book! This is the sort of novel you wish had been on the syllabus when you were in high-school. There’s a lot of merit in the book, from Wang’s lyrical writing to the sweeping historic landscape. But at its centre, ‘Little Paradise’ is a wartime romance and addictive reading.

If the old adage is ‘write what you know’ then it’s obvious why Gabrielle Wang chose to tell this story. She has clearly grown up hearing the tale of her parent’s meeting and star-crossed love, and their romance is grand-scale and incredible enough to merit book-form. JJ and Mirabel’s romance is swoon-worthy, playing out during World War II and the impending communist take-over of China – theirs is an epic love story. Wang did well to not lose these two characters amidst the historic back-drop; she beautifully describes their first meetings and timid affection, which eventually grows into a heated romance.

“One day we will be together again,” JJ said.
She put a finger on his lips. No, they could only talk about this room, this bed, their love, and the sad note that lingered on the strings of the Chinese violin.
But a tiny seed of hope had been planted.

Melbourne is my home-town, so I loved reading about the city in 1945. Wang offers a little snatch of Melbournian history and brings the wartime town to life. Wang also does a wonderful job painting a picture of a third-generation Chinese-Australian family. She touches on Anglo prejudices, Melbourne’s ‘melting pot’ and the strict familial obligation Mirabel has to her parents. Wang offers a fascinating glimpse into Chinese family and tradition, and sets up many seemingly impossible obstacles (both familial and historic) for Mirabel and JJ to overcome. 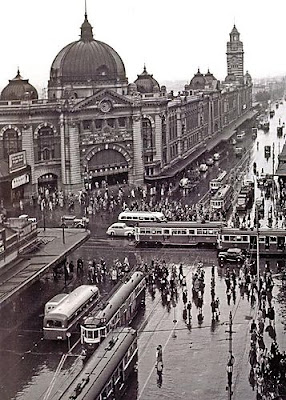 Melbourne's Flinders St. Station, 1945
Though the first-half of the book is set in Melbourne during war-time, it’s the second-half based in Shanghai that really captivates. China is on the brink of revolution, and the Kuomintang government are trying to weed out communists and sympathizers to curb the red fever. Mirabel and JJ find themselves caught in the midst of revolution, when the country is on the precipice of the communist take-over. This was fascinating reading for me, as Wang brings this giant historic event to a more personable level through Mirabel and JJ. The second-half of the book also offers some of the most heart-rending scenes, like Mirabel’s visit to the devastated city, Hiroshima. In the second-half Wang really stretches her literary wings and absolutely soars with the plot and narrative.

‘Little Paradise’ is an epic saga of wartime romance, revolution and one girl’s destiny. I really did love this novel, and wholly wish something like ‘Little Paradise’ had been on my reading list when I was in school.