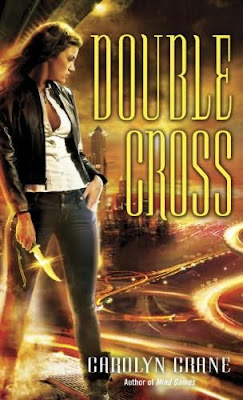 SOME SECRETS COME BACK TO HAUNT. OTHERS COME TO KILL.
Justine Jones lived her life as a fearful hypochondriac until she was lured into the web of a mysterious mastermind named Packard, who gifts her with extraordinary mental powers - dooming her to fight Midcity's shadowy war on paranormal crime in order to find the peace she so desperately craves.

But now serial killers with unheard-of skills are terrorizing the most powerful beings in Midcity, including mastermind Packard and his oldest friend and worst enemy, Midcity's new mayor, who has the ability to bend matter itself to his will.

As the body count grows, Justine faces a crisis of conscience as she tests the limits of her new powers and faces an impossible choice between two flawed but brilliant men - one on a journey of redemption, the other descending into a pit of moral depravity.

There’s an old literary idiom called ‘Chekhov’s gun’. Based around the writings and musings of the beloved Russian writer, Chekhov’s gun dictates that if there’s a rifle on the wall in the first act, it has to go off in the third.

While reading Carolyn Crane’s explosive second instalment in her ‘Disillusionist’ trilogy, I kept thinking about Chekhov and his gun. A thick sense of foreboding permeates ‘Double Cross’ and the entire novel is rich with the smell of gunpowder... metaphorically speaking, of course.

The book begins shortly after the events of ‘Mind Games’. Hypochondriac Justine Jones is forced to work for a group of Disillusionists in order to control her cranium-centred anxieties. Justine and her troop of hypochondriacs ‘zing’ their various concerns, worries, and fears into unsuspecting criminals. They’re a type of ‘psychological hit squad’ who bring down villains with their vicarious neuroses. And heading this hit squad of fretfulness is highcap Sterling Packard – a man who can see people’s psychological make-up and can lessen the angst of his neurotic assassins.

Justine and Packard have a rocky relationship. Following a heated encounter Justine discovered that Packard tricked her into working for him, and relying on him to keep her sane.

In the wake of Packard’s betrayal, Justine fell into the arms of Midcity Mayor, Otto Sanchez, another highcap who can control building structures. Otto and Justine share cranial hypochondria and Justine believes she has found her soul-mate in the upstanding mayor.

But things are cutting into Justine and Otto’s blissful romance. Namely, a group of vigilante snipers dubbed ‘The Dorks’ who are targeting and killing highcaps. The Dorks have Otto run off his feet and Packard determined to put an end to the highcap deaths. And Justine is caught in the middle. . .

I loved this book. I went in with high expectations and came out utterly impressed. ‘Double Cross’ lives up to its name - the book is full of curveballs, character hurdles and jaw-dropping reveals. This is a book about gray areas; none more so than where characters are concerned. I finished ‘Mind Games’ liking Packard, but rooting for Otto and Justine. But while reading ‘Double Cross’ I kept swinging back and forth – from Team Packard to Team Otto and back again – and I loved the indecision! I don’t like reading about straight-up Good vs. Evil, or black and white characters. Otto and Packard are conundrums, each with a complicated past and weighing guilt. Otto and Packard grew up together for a time, and their shared history can be told from different perspectives. And at different times in the novel each man will be cast in a heroic and villainous light;

Packard says, “You love to remind me that I’m a villain, Justine, but when I do something the least bit villainous, you act outraged.”

I loved the way that Carolyn Crane kept me guessing. I was on the edge of my seat from page 1 to 326 and I didn’t want it to end.

I feel a little ill. “We’re helping people.”
“You’re contorting so wildly to pretend you’re on the good side, you’re like a fucking sideshow act. Reality check, sister. We’re the bad guys. We work for a power-hungry megalomaniac. Otto’s a megalomaniac.”

Justine grows a lot in this book. We saw a lot of her tender-heart in ‘Mind Games’, when she felt awful for ‘zinging’ people with her paranoia. But in ‘Double Cross’ she really takes a guilt trip and pushes herself to reform. I love Justine; she’s hands-down one of the best female protagonists out there. I love the fact that she lives a lot of her life in fear, but doesn’t want to take the easy way out and unload her problems onto other people. I read Justine as being a very strong character, but utterly oblivious to her own capabilities. Half the fun (/frustration) of reading this series is waiting and hoping that Justine realizes her own brilliance.

There is a HUGE cliff-hanger at the end of ‘Double Cross’. We’re talking Grand Canyon-sized, ‘who shot J.R.?’, will those Chilean miners survive type of cliff-hanger! And really, I would be angry with Carolyn Crane for such an ENORMOUS gaping-hole of an ending. . . if it weren’t so brilliant. I mean, this is one heck of a Chekhov’s gun ending – that rifle went off with a BANG and I can’t wait to see what happens when the smoke clears in the third and final book. . . 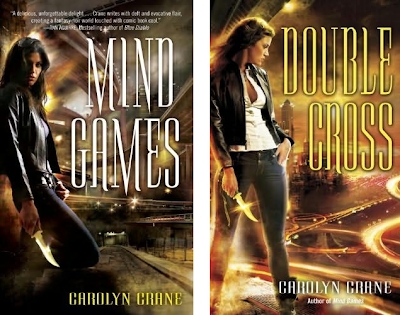