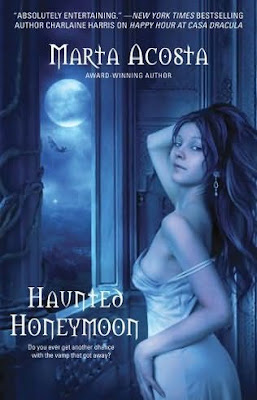 THERE'S MORE THAN HER HEART AT STAKE. . . .As the only human to survive vampire infection, Milagro de Los Santos has become quite a celebrity among the blood-drinking elite. Too bad the perks of her condition - increased strength, super-fast healing - don't pay her condo fees. There are other complications too. She's feeling guilty about her fling with enigmatic Vampire Council member Ian Ducharme, and pining for her ex-fiancé, Dr. Oswald Grant . . . the fabulous man whose kiss changed her life. It's when Milagro - irked by Ian's attentions to his neighbor - travels to London and enjoys a sexy flirtation of her own, that the blood really hits the fan. Suddenly, those around her are dying gruesome deaths and Milagro's being interrogated. Who would kill to set her up as a murder suspect? Milagro just wants to turn back the clock and have another chance to make things right, but no sooner has she escaped to Oswald's ranch than an accident obliterates her memory. Will the murderer come after her now? And will amnesia spark a romantic do-over with Oswald - or will she make all the same mistakes before she ever gets to say "I do"?


Tabula rasa means ‘blank slate’, and is both a kick-ass season six episode of ‘Buffy the Vampire Slayer’ and the overarching theme of Marta Acosta’s fourth and final ‘Casa Dracula’ novel. . .

I have a kind of alacrity in sinking
- William Shakespeare
In this novel Milagro is dealing with the fallout of ‘happily ever after’. Following the heartbreakingly complicated events of ‘Bride of Casa Dracula’, Milagro de Los Santos made her bed and chose her man. Now she is discovering what happens after you ride off into the sunset with your prince charming. . .

In ‘Haunted Honeymoon’ Milagro discovers that the man she chose can promise her lust, but not love; adoration but not fidelity. She feels seller’s remorse for the man she gave up, and to nurse her broken heart (and make some mula off a fauxoir freak) she jet-sets to London and shacks up with a politically-minded surfer with a lush name.

When Milagro returns her problems are just as she left them – caught between the man she chose and the man she wants, and the vampire society who revere and vilify her. . . matters get even more complicated when the English surfer follows her home and gets himself killed. Suddenly Milagro is hunted by military contractors, and pissed off with Cockroaches and Pickles until her memory finally snaps and amnesia gives her a case of tabula rasa.

Women are made to be loved, not understood.
- Oscar Wilde
Marta Acosta’s ‘Casa Dracula’ series is not paranormal romance. Rather it is a comedy-of-manners; revelling in absurd non sequiturs, stinging social observations and hilarious juxtapositions. Any paranormal and romantic elements are fringe benefits. . . and I sort of love the way that in ‘Haunted Honeymoon’ Marta Acosta tramples a lot of paranormal romance conventions. She writes messy love, fucked-up characters, awkward situations and scathing diatribes. And I loved every word. . .

Ah! how annoying that the law doesn't allow a woman to change husbands just as one does shirts.
- Moliere
If you were ever under the impression that the ‘Casa Dracula’ series is paranormal romance, then Milagro’s bed-hopping should quickly dispel such misconceptions. It is very un-feminist and puritanical that in a lot of paranormal/urban-fantasy books the female characters are quite chaste. Screw that! Marta Acosta writes messy love – her heroine enjoys sex and flirting and she falls into bed for fun and forgetting. I loved reading about Milagro’s oozing sexuality – both the references to her chichis and male character’s reactions to her bazoombas. Sure, it’s funny, but on a more emotional level I enjoyed reading Milagro’s sexual armour. Acosta gets very Freudian in ‘Haunted Honeymoon’ and explores Milagro’s childhood as it impacts her current adult relationships, and it is fascinating. We all have 20/20 vision in hindsight, and I felt as though Acosta delving into Milagro’s past made the previous three books more profound and enriching.

A gentleman is one who never hurts anyone's feelings unintentionally.
- Oscar Wilde
The ‘Casa Dracula’ series is a comedy-of-manners, but some of the most powerful scenes in ‘Haunted Honeymoon’ came when manners were disposed of and characters didn’t pull punches;

Ian stared at me with his languid, hooded eyes and said, “You’re very conflicted about who you are, what we are, as you’ve always been. But what is amusing in a girl becomes tiresome in a woman. Grow up.”
“So says a man who spends every waking hour in pursuit of pleasure.”
“Remind me again, Milagro, what it is that you do to contribute to society, besides your decorative value, which is considerable.”

‘Haunted Honeymoon’ is very much centred on Milagro – deconstructing her personality, her past and her predicaments. She is an infuriating character sometimes – both hyper-aware and utterly ignorant of herself. In other words, Milagro is just like everyone else in the world. But I loved that in ‘Haunted Honeymoon’ a lot of dirty laundry was aired, and characters spoke their minds and had their say – often voicing criticisms and witticisms that had been on the tips of their tongue for three books. The amnesia plot is essentially a stripping down of Milagro’s defences; a way for her to take a cold, hard look at her life decisions and gain perspective. It may be a cliché soap-opera storyline, but with Ms. Acosta’s writing juju the amnesia plot becomes a deeply profound and funny character exposè, more in keeping with an Oscar Wilde comedy-of-errors than the Goldie Hawn movie 'Overboard'.

There is no praise to bear the sort that you put in your pocket.
- Moliere
‘Haunted Honeymoon’ does pack quite a punch. I cried, I laughed, I yelled at certain characters when they didn’t chase after the girl or made inappropriate marriage proposals. But overall I got a sense of hope from this final ‘Casa Dracula’ novel;

“I don’t believe in magic.”
“You are magic.” He put his fine-boned hand on my wrist. “You are Milagro de Los Santos, the Miracle of the Saints. You must trust in yourself, in the role that destiny has written for you. Even though others would put you in a cage, the one who watches you recognizes your true self and loves you still.”
I was surprised at the shiver that went through me. “I know you’re full of it, but damn if I don’t want to believe you.”
“Then do,” he said, and winked one of his big bug eyes.

This is the grand finale for Milagro de Los Santos – and her send-off is absurdly wonderful and befitting the unique ‘Casa Dracula’ series. Milagro’s love life is sorted out, once and for all. She accepts hard truths and her own limitations, and the book finishes on a beautiful note of Scarlett-esque proportions; ‘tomorrow is another day’. I would be over-the-moon thrilled if Marta Acosta wrote more books in the ‘Casa Dracula’ series. But if ‘Haunted Honeymoon’ really is the last then it’s a beautiful send-off for one fabulous señorita.