★Have you heard about 'Across the Universe'?★ 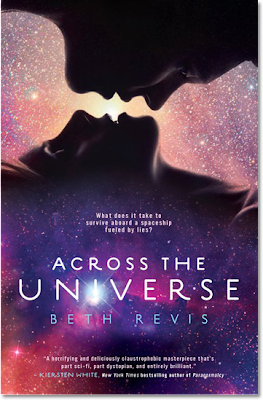 I have absolutely, positively GOT to share my new obsession with you. . . Beth Revis.

Her debut YA novel is called 'Across the Universe' and is set for a January 11th 2011 release. The book is a huge Razorbill/Penguin coup and the publishers are doing a fabulous publicity push for the book. But to be honest, I'm not sure they'll need it because this book will sell itself.

The book is a dystopian sci-fi romance extravaganza! And best of all is that 'Across the Universe' is the first book in a trilogy! YAY!
I spent one whole day with my eyes glued to the page, my heart beating out a samba in my chest and my hands were shaking as I read the last page.

Razorbill/Penguin are doing some great promotions for this book. You maybe have already heard some blogosphere whisperings and rumblings since ARCs of 'Across the Universe' are being handed out like black-market contraband to a lucky few. If you are a book blogger with an affiliation with Penguin, then I suggest you offer up your first-born for an advanced reader's copy (trust me, it'd be worth it!).

If your supplier (publisher) can't get a copy for you, then don't panic. There is a fabulous book website for 'Across the Universe' where you can read the first chapter (it's a doozy!)

I can't post my review until December, but I loved the book so much that I had to say something about it's epic fabulousness. . .

A love out of time. A spaceship built of secrets and murder.

Seventeen-year-old Amy joins her parents as frozen cargo aboard the vast spaceship Godspeed and expects to awake on a new planet, three hundred years in the future. Never could she have known that her frozen slumber would come to an end fifty years too soon and that she would be thrust into a brave new world of a spaceship that lives by its own rules.

Amy quickly realizes that her awakening was no mere computer malfunction. Someone—one of the few thousand inhabitants of the spaceship—tried to kill her. And if Amy doesn’t do something soon, her parents will be next.

Now, Amy must race to unlock Godspeed’s hidden secrets. But out of her list of murder suspects, there’s only one who matters: Elder, the future leader of the ship and the love she could never have seen coming.