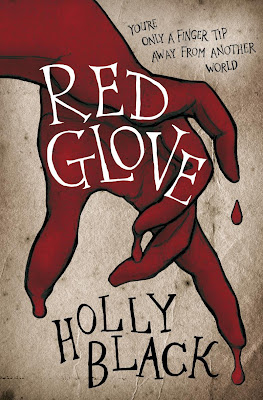 From the BLURB:
Curses and cons. Magic and the mob.
In Cassel Sharpe's world, they go together. Cassel always thought he was an ordinary guy, until he realized his memories were being manipulated by his brothers. Now he knows the truth—he’s the most powerful curse worker around. A touch of his hand can transform anything—or anyone—into something else.
That was how Lila, the girl he loved, became a white cat. Cassel was tricked into thinking he killed her, when actually he tried to save her. Now that she's human again, he should be overjoyed. Trouble is, Lila's been cursed to love him, a little gift from his emotion worker mom. And if Lila's love is as phony as Cassel's made-up memories, then he can't believe anything she says or does.
When Cassel's oldest brother is murdered, the Feds recruit Cassel to help make sense of the only clue—crime-scene images of a woman in red gloves. But the mob is after Cassel too—they know how valuable he could be to them. Cassel is going to have to stay one step ahead of both sides just to survive. But where can he turn when he can't trust anyone—least of all, himself?
Love is a curse and the con is the only answer in a game too dangerous to lose.
For a long time Cassel Sharpe was the black sheep of his family. Cassel’s brothers, parents and grand-parents were all magic workers – ‘gifted’ with the touch of luck, emotion memory and death. Each member of his family worked for the prestigious mob family, the Zacharovs. All except Cassel. As a child he was permitted to play with Zacharov’s daughter, Lila, but it was a well known fact that Cassel would amount to nothing in the eyes of his family. He was a magical dead-end, thoroughly normal, unremarkable and . . . human.
And then Lila was murdered, and everything changed.
For a long time Cassel thought he was the murderer. He thought his family were protecting him from Zacharov’s wrath . . . he didn’t realize that his family had been working him. Stealing his memories, warping his past and his emotions. But the biggest secret of all that his family kept from him was that he was a worker. The most gifted worker of all, no less. Because Cassel works transformation. He can change any object into his liking. He can alter someone’s physical appearance; turn a girl into a cat and a man into a chair. He is the perfect assassin, and his family used him as such.
Now the truth is out. Lila lives, and Cassel knows he cannot trust his brothers, Barron and Phillip. And transformation is Cassel’s coveted magic.
For a long time Cassel thought he would amount to nothing. Now he is just starting to understand how valuable he has always been. And now he has a choice to make – will he use his powers for good, or follow in his family’s footsteps?
‘Red Glove’ is the second book in Holly Black’s twistingly brilliant ‘Curseworkers’ series.
I loved the first book ‘White Cat’ – it became an instant favourite and was proudly passed around to friends and family. I had extremely high expectations going into ‘Red Glove’, and I am happy to say that Black met each and every one of them. . .
When ‘Red Glove’ begins, Cassel is living in the fall-out of his revelations. He knows that his family betrayed him for years, his brother’s worst of all. His mother worked a love curse on Lila and now the only girl he has ever cared about has false emotions for him. His friends at the prestigious Wallingford academy, Sam and Daneca, know what he is but not what he can do . . . but the biggest discovery that Cassel is trying to contend with, is accepting his own villainy.
His brother, Barron, kept Cassel blissfully ignorant of his transformation assassinations. In ‘Red Glove’ Cassel is coming to terms with the fact that for years he has been involved in mob activities. And just because he can’t remember what he has done, does not mean his hands are any less bloodied. Cassel’s conscience suffers a crippling blow in the beginning of ‘Red Glove’, when someone close to him is murdered . . . and Cassel must admit that he all but signed the death warrant.
When Cassel is approached by the FBI to act as narc against the Zacharov family, he is somewhat tempted by the idea of a morally clean slate;

“You could have a life outside of all this,” Agent Jones says. “You could be on the right side of the law. You don’t have to protect these people, Cassel.”
I am these people, I think, but his words make me fantasize for a moment about what it would be like to be a good guy, with a badge and a stainless reputation.

Holly Black is weaving one twisted tale in her ‘Curseworkers’ series. Even Tony Soprano’s head would be spinning for all the double-dealings, double-talk and betraying. I absolutely love the sunken morals of this series. It’s fascinating to read the inner-workings of mob relations and the myriad of ways that Cassel uses the bad guys against themselves. Because Cassel doesn’t want to be bad. Sure, he does bad things – like act as his school’s bookie, break girl’s hearts and con the occasional sap. But for the most part Cassel is desperate to keep his head down and his hands clean. But as that classic quote goes; “Just when I thought I was out... they pull me back in.”
Cassel is lost. This series is all about reading him find his way. Cassel doesn’t have a lot of guidance on the path to redemption – his family are his biggest betrayers, the girl he loves is destined for mob royalty and even the Feds are using him for their own gains. But through all this murk, Cassel is guided by a self-imposed moral compass that will lead him true. He’s a fantastic character and a great disrepute to the old nature vs nurture debate. I love Cassel, for all his faults he is a core good guy and I can’t wait to read the ways in which he will find his way to right.
I adore Cassel, and maybe that’s why I despise the character of Lila so much. I didn’t like her in ‘White Cat’, but I half expected Cassel to realize she’s not a very nice girl and get over her. But in ‘Red Glove’ it seems Cassel is stuck in his romantic ways. He cannot see Lila for what she really is; a not very nice girl who will only drag Cassel away from his path to righteousness. She is his Lady Macbeth, and I cringe to think where she will lead him. I can’t really tell at this point where Holly Black wants to take readers with regards to Lila. Are we meant to hate her? Are we supposed to begrudgingly like her, the same as Cassel? I can’t tell, all I know is there is a car crash waiting to happen between Lila and Cassel . . .
One of the things I love most about the ‘Curseworkers’ series is how immersive it is. Holly Black has written a fantastic society and impending civil rights movement between workers and humans. In this world, workers are on the cusp of being ghettoized, named, shamed and tagged. The Government, and one zealous senator in particular, are keen to force citizens to sit physical testing which will determine if they can work magic or not. Presumably once people are ‘tagged’ as workers (not dissimilar to having to wear a Star of David on your lapel) society could go into a freefall – implementing something close to apartheid to separate the humans from the workers. Now, Black hasn’t made all these politics the main focus of Cassel’s story. The politics are always playing out in the background, and the most they impact him and his friends is via school clubs and debate teams. But I love the intricate political backdrop that makes this world all the more substantial. I love the symbolism of wearing gloves and the power behind taking them off, it’s not dissimilar to refusing to give up your seat on a bus;

Then a girl walking just ahead of us takes off her gloves. She holds up her hands. They look pale and wrinkled from being inside leather in this heat.
I blink. In my life I haven’t seen many bare female hands. It’s hard not to stare.
“Bare hands, pure heart!” the girl yells.
Beside her I see a few other people pulling off gloves with wicked smiles. One throws a pair into the sky.
My fingers itch for release. I imagine what it would be like to feel the breeze against my palms.

‘Curseworkers’ is a fantastic addition to the YA paranormal genre. Holly Black is drawing on classic mobster tales, from ‘The Godfather’ to ‘The Sopranos’. But she’s also writing a moral conundrum of Shakespearian proportions. Cassel Sharpe is in blood stepped in so far that should he wade no more returning were as tedious as going . . . and I can’t wait to read which way he goes.
5/5 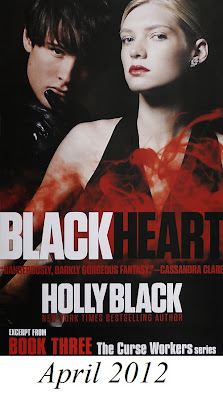 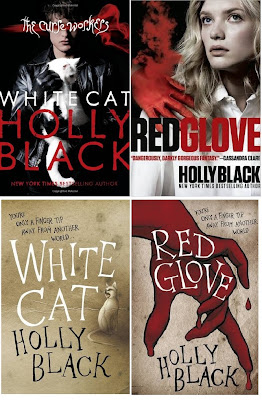