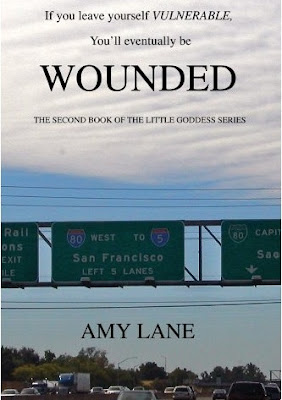 Green: "If someone gives their life for you, it is because they can not bear to live in a world without you. This is a great gift and a terrible burden, and if you are going to live, you need to be grateful for the gift and prepared to bear the burden."
Cory: "I do fearsome things, when I'm touching people who love me..."

Cory fled the foothills to deal with the pain of losing Adrian, and Green watched her go. Separately, they could easily grieve themselves to death, but when an enemy brings them together, they find out what a great and terrible force love can be.
*** This review contains SPOILERS of the first book in the ‘Little Goddess’ series, ‘Vulnerable’ ***
It has been months since Cory left her newfound fae home in the California foothills. She left behind her new, supernatural life and the man she loves, the fearless foothill leader Green. She left with grief in her heart and despair in her eyes . . . for she still mourns the death of her first lover, the vampire Adrian.
Adrian was taken from her too soon, with too little to remember him by. She and Green both grieve for him and miss him, but Cory feels the suffocating need to leave for school in San Francisco to deal with her wounded heart in private.
And it is in this glorious new city that Cory is attacked. A strange supernatural presence has stolen Cory’s ‘first’s’ – the most important of which are linked to Adrian.
So Green, along with his faithful elf second, Arturo, Adrian’s adopted-brother and lover, Bracken and a cache of fighting fae leave for San Fran to protect Cory and get back what was ripped away from her.
‘Wounded’ is the second book in Amy Lane’s paranormal romance series, ‘Little Goddess’.
I went into this book a wee-bit sceptical. I did enjoy the first book of the series, ‘Vulnerable’, but was flabbergasted and somewhat disheartened by the ending in which Adrian sacrificed himself for his and Green’s people. I loved Adrian – I thought he had a terribly tragic past and that there was lots of potential between him and Cory and what they bought out in each other. I was looking forward to reading a series in which a romantic threesome was established and maintained. Alas, that was not Amy Lane’s intended trajectory for this series. . .
‘Wounded’ sees Cory and Green in the latter stages of their grief, which has been worsened by their distance and time apart. When a malevolent being forces Green to rush to Cory’s rescue, they are both forced to admit their feelings and struggles in the wake of Adrian’s death. Green must acknowledge that Cory will need to take another lover (or two) because as a sex-healing fae, Green cannot give himself completely or monogamously to his beloved. Meanwhile, Cory is surprised to learn that a college classmate has been crushing on her for four months, and that Adrian’s adopted-brother, best friend, romantic rival and sometimes-lover, Bracken, is lusting after Cory and desperate to be her new bedmate.
Despite the changing tides of Cory’s affections as she opens her heart up to new lovers and romantic possibilities, Green is her constant. Their love is spectacular, and open. Yes, Green gives his body to numerous Sidhe and fae in order to heal emotional and physical wounds, as well as strengthen alliances . . . but what he has with Cory is distinctly different in heart and tone. His sexuality may be fluid and frequent, but Cory is a boundless love that Green has not had the pleasure of experiencing since Adrian came into his life. I love Green and Cory, even if there’s still a small part of me that believes Adrian was Cory’s more interesting partner.
Bracken is a surprising new addition to Cory’s ‘harem’. He was a sidelines character in ‘Vulnerable’, one who had a combustible and unfriendly first encounter with Cory. But since Adrian’s death Bracken has reassessed his intentions and decided he wants in Cory’s bed and even a more permanent place in her heart if she will allow. I really liked Bracken – he’s a nice new romantic addition (in replacement of Adrian) and his being polar-opposite to Green makes for a nice, fiery balance in Cory’s life. Bracken is possessive and jealous, and Cory knows that a relationship with him will be full of high-drama and pitfalls . . . but by the same token he is caring and noble, and Cory feels safe in his arms like she hasn’t done since her first lover’s death. Bracken and Cory are a somewhat tangled web, for Bracken’s previous relationship with Adrian – but as this series progresses Amy Lane really highlights how fluid and open the fae sexuality is, and as a reader you don’t even bat an eyelash at some of the trickier couplings.
Cory is slowly coming into her own in this book. She made so much progression in such a short time in ‘Vulnerable’ – from an angry Goth girl, to lover of a fae and vampire, respectively. But Adrian’s death has put her two steps back in emotional development. It’s interesting to read her struggles with a changing world view while dealing with the very raw, human emotion of grief and loneliness;

“ . . . My whole life I wanted I wanted to get out of the freaking foothills of California, but now all I can think of is going back, because I fell in love with Green’s home, and Green’s people, and now I want to be there again. I mean I'm what? A hundred and fifty miles from home?”
“Too far.” Bracken murmured. “You’re too far from home.”
“It feels like a hundred and fifty mile hole in my heart.” I told him, feeling that hole heal a little, just to say it. “Can you really fall in love with a life? With a . . . preternatural flop house for the fey and undead, just by falling in love with its leaders?”

I'm still not 100% convinced that Adrian’s death wasn’t a trigger-happy plot ploy. I still feel like he was a missed opportunity and he is sorely missed in ‘Wounded’ (but still with infinite possibilities?) . . . but I am interested to read the next two books in the ‘Little Goddess’ series. I am loving Cory’s emotional maturity and changing view of the world – not to mention a brand new kick-butt attitude and powers to match. The romance in this book is fiery and lush, with plenty of couplings and romantic tension.
4/5